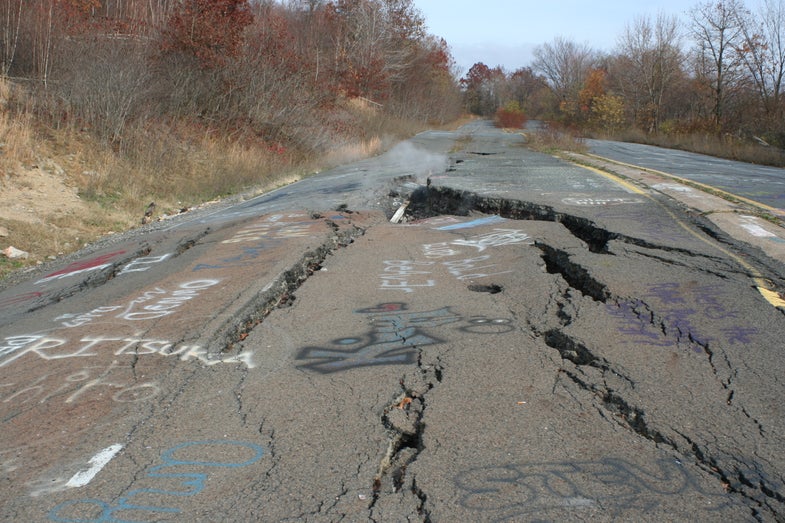 Toxic gases seep out of the ground, where the soil itself could reach temperatures of nearly 1,000 degrees Fahrenheit. Long cracks in the surface belie the seeming steadiness of the earth under your feet, which is only held up by a few pillars of coal…coal currently being gnawed on by a ravenous fire.

Centralia was once a normal small town, with over 1,000 residents. Buildings and houses lined the tiny grid of streets, and people went about their daily lives, working, resting, eating, and throwing out their trash at the local dump. All was well deep in the heart of country until Memorial Day Weekend, 1962.

No one knows exactly what started the fire, but the most widely accepted explanation is that people set fire to the local dump to try to reduce the amount of trash. (It was the 1960’s. This was considered a valid idea.)

Unfortunately, the landfill was located near a coal seam. This coal seam (also known as a coal vein—both refer to a layer of coal in the earth) had been abandoned in the 1930’s but it still had enough coal to start burning.

The fire followed the coal like a lit wick on a stick of dynamite, heading deep underground where a warren of coal mining tunnels stretched under the town for miles. The mines linked together multiple coal seams, providing a buffet for the fire to eat and start to grow bigger and stronger with each passing year.

Why don’t they just put it out?

To this day, it still burns, even though over $40 million was spent to attempt to control the fire, and then later evacuate the residents in the 1980’s and 1990’s when authorities decided the fire was too much of a risk, and asked the people who had lived for decades with the fire to pack it all up and leave.

By that time, the residents watched as toxic gases began seeping up from the ground and into their homes. The mines closed swiftly, taking jobs with it. Sinkholes and cracks began to appear around town, opening into

The authorities tried nearly everything to put it out. They pumped water underground. They put clay over the surface to prevent oxygen from sustaining the flames. They pumped a slurry of fly ash (ash from coal-burning fire plants) water, and rocks into the abandoned mine. Nothing worked.

People proposed smothering the fire, cutting off all supplies of oxygen, but by then it had gotten too large and spread out, capable of drawing the scant amount of oxygen it needed from any number of places. A coal fire only needs 1-2 percent of oxygen to burn. For comparison, the air we breathe typically has 21% oxygen.

Glenn Stracher is a professor at East Georgia State College, who has been studying the Centralia site and coal fires around the world since the 90’s. He says that one of the biggest problems with underground fires is that they are so elusive.

One of the people who tries to answer that question is Timothy Alteres with the Pennsylvania Department of Environmental Protection. Alteres is with the Department’s Bureau of Abandoned Mine Reclamation, and works to repair the scars (and burns) left by centuries of mining in the state.

There is plenty of work for Alteres and his colleagues to do. Pennsylvania is home to over 250,000 acres Abandoned Mine Lands—a third of the total in the entire country. The goal is to restore the lands to their natural state, at least as much as is possible. One of the issues of the job is dealing with abandoned coal seams deep in the earth and refuse piles from coal mines, both matches just waiting to be lit.

In addition to keeping an eye on potential fires, Alteres monitors the fire at Centralia through some of the 2,000 boreholes that were drilled into the area in an attempt to monitor how the Centralia fire was moving through the soil.

Alteres says that about 400 acres of Centralia have burned so far, but that the fire has moved deeper, further into the earth where it still smolders. There are still toxic gases, and the danger of sinkholes, but the heat has dissipated from the soil and smoke isn’t as frequent as it was in the 1960’s and 70’s.

Over the years, people like Alteres mapped out the extent of the fire and found that eventually it would be contained. Either it would venture so deep that there would be no more air or coal to consume, or it would head out laterally, towards areas where over 200 years of mining has tripped away all traces of coal, a firebreak inadvertently built by our forbearers.

The Bureau is more proactive when it comes to the 30+ other mine fires burning in the state. In the past 5 years, Alteres estimates that his group has put out between 6-8 fires, usually by figuring out where the fire is, then digging or blasting out a trench in front of it and removing any coal that the fire could latch onto.

“Digging it out is the best way. Once it’s isolated it can just be sealed and left to burn itself out,” Alteres said.

The work by Alteres and others is a hopeful sign for the many other people living near coal fires around the world. Centralia is far from the only coal fire still burning. Some coal fires can start by natural causes—either the coal starts to spontaneously combust or a lightning strike or forest fire happens nearby.

But more often than not, these days, coal fires have a more human source. “Thousands of these fires burning on all continents except Antarctica” Stracher says. “Certainly, people have contributed to the problem.”

Stracher notes that the numbers of coal fires have gone up since the Industrial Revolution, and that now, some of the largest and most problematic fires are in India and China where rapidly industrializing economies lead to a huge desire for coal.

There are still coal mines in Pennsylvania too. The state retains its title as the fourth largest producer of coal in the country and the only state to produce the hard, carbon-rich anthracite, valued because it can produce more heat than other forms of coal as it burns.

Pennsylvania still gets a slim majority of its electricity from coal, but coal mining has fallen far behind natural gas in recent years. Renewable energy sources like water, wind and solar are slowly starting to gain traction in a state that has relied on the black, rich veins of coal, gas and oil. By 2021, the state hopes that its share of renewable electricity will rise from the paltry four percent that it accounts for today to a more respectable 18 percent.

It’s a small step, but a noticeable one. If a coal-loving state like Pennsylvania can gradually wean itself off fossil fuels, there’s hope that places like China will also reduce their dependence on the quick and easy energy fix. In fact, there are already signs that China’s use of coal has reached its apex and is beginning a slow descent.

Less coal mines means less coal at the surface, where it has a far greater likelihood of catching on fire.

On Google maps, the satellite images of Centralia are almost hopeful. It looks like a planned suburban development, with neatly laid out streets lined by vacant lots, all of it covered with vegetation. It’s a town with no houses, just waiting, it seems, for someone to sweep in with blueprints and hammers and get to work. But despite the verdant facade, rebuilding is highly unlikely.

Deep in the earth, the Centralia fire rages on, as it has for over fifty years. The flames have decades of fuel left to eat through.