Why can’t we decide what to do about nuclear energy?

Build them up? Or tear them down?

Within sight of the sunbathers at Old Man’s surf spot, 55 miles north of San ­Diego, California, loom a pair of 176-foot-tall orbs. They’re a strange backdrop, home of the San Onofre Nuclear Generating Station. Since its first reactor fired up in 1968, the plant has powered millions of lives. But now these concrete and steel domes house a problem. Inside their frames sit millions of pounds of radio-active fuel no longer of use to anyone. In 2012, a small radiation leak forced the shutdown of one reactor. Rather than go through the regulatory red-tape of restarting the remaining reactor at reduced power, Southern California Edison, the operator, decided to shutter the whole plant. This year, workers will begin dismantling it as part of the costliest and biggest nuclear decommissioning project ever attempted in the U.S. The initial deactivation should take 10 years, with 700,000 metric tons of infrastructure crushed and freighted off to burial plots in Utah, ­Texas, and Arizona. The most radioactive stuff—3.2 million pounds of spent nuclear waste, including uranium-235—will be interred on-site in steel-and-concrete casks that will dot the landscape like tombstones. It’s a fitting metaphor for what seems like the beginning of the end of America’s ­nuclear-energy ambitions. San Onofre is one of 19 ­nuclear power plants in the U.S. ­undergoing decommissioning. Of the 99 remaining reactors in the U.S. fleet, as much as one-third might be taken offline within a decade or two. Some might apply for an extension. But many could close for good thanks to three things that are killing off nuclear energy worldwide: competition from cheap natural gas, the rising affordability of wind and solar generation, and fear of radiation-spewing accidents.

“The nuclear industry is pretty broken in the United States,” says Armond Cohen, executive director of the nonprofit Clean Air Task Force, which advocates for low-carbon energies to combat climate change. Cost overruns and delays have hamstrung the few nuclear power plants that were under construction, in South Carolina and Georgia. Even if that weren’t the case, nuclear today makes no economic sense, Cohen says. “You could build the most cost-effective reactor in the world, and it wouldn’t beat the cost of a combined cycle natural gas plant.*” 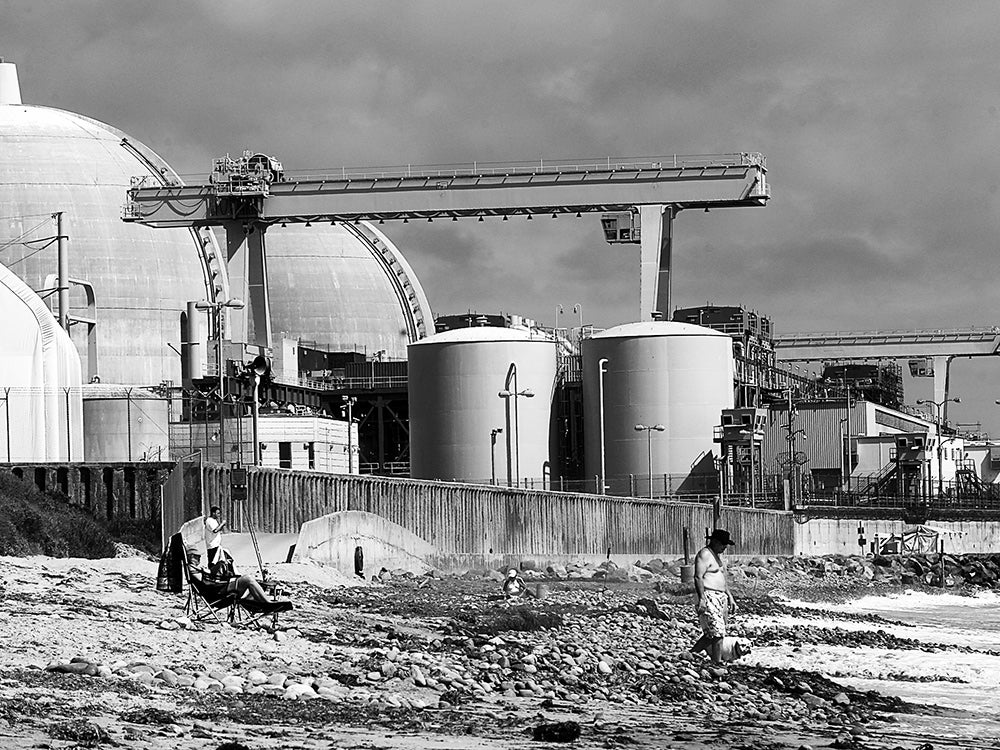 It’s not just the U.S. industry. A number of other nations are dimming the lights on their nuclear plants. Germany, where eight reactors supply 13 percent of the country’s power, has vowed to shut them all by 2022. Switzerland pledged to phase out its five reactors, which provide 40 percent of its energy. And France, which gets 75 percent of its energy from nuclear, vowed to slash consumption to 50 percent by 2025, only to back off that promise in November, worried that a shift from carbon-zero nuclear would prevent it from meeting its climate-change goals and lead to an electricity shortfall.

And yet a handful of other nations are ­accelerating toward a nuclear future. China, in trying to reduce its expanding reliance on coal, is aggressively pushing for more alternative fuels, with plans to increase its nuclear capacity to as much as 150 gigawatts by 2030, up from about 38 gigawatts in 2017. It is adding 20 new reactors to its current fleet of 37. Russia is building seven, India six, and South Korea three.

China, in particular, is pursuing novel reactor designs expected to run more cheaply, efficiently, and safely than those the world has used for decades. The most common today is the light water reactor, in which water cools solid nuclear fuel and generates turbine-spinning steam. Alternatives include a variation on the light water reactor called a small modular reactor that, in theory, could be built quickly and inexpensively, though its design will put out less energy. Another is a molten salt reactor that employs melted salts to cool fuel and produces less waste than the current fleet.

As the U.S. retreats from nuclear power, critics warn it is giving up on a source of electricity that is reliable and emits zero carbon, a boon to any nation looking to trade some of its fossil-fuel habit for clean power. Former Obama energy secretary and nuclear physicist Ernest Moniz cautioned as much this past July. At a summit on energy and security, he said abandoning nuclear would leave the nation vulnerable to environmental and strategic threats, by sidelining a greenhouse-emissions-free power and by weakening national-security ­interests: A brain drain of ­nuclear engineers and technicians to nuclear-hungry countries is sure to follow.

The historic irony is not subtle. The U.S. ­ignited the nuclear age, aided by scientists originally from nations such as Germany, Hungary, and Italy. After it demonstrated the horrific power of nuclear energy on Japan in World War II, the U.S. military and commercial researchers looked for ways to exploit the technology. An early success: nuclear powered submarines that could travel underwater almost indefinitely. The sub’s reactor design quickly became the basis for the light water reactors we use today. The problem is the uranium in a number of those reactor designs operate at high temperature, requiring a massive amount of water to keep from overheating. If anything—for instance, a natural disaster—disrupts the plant’s safety system, the reactor core can melt down, releasing radiation into the environment.

A Cold War nuclear boom saw hundreds of light water reactors spread across the U.S. and Europe. As they proliferated, public fears grew alongside them, and by the 1970s, movies like The China Syndrome evoked the horrors of what might happen if something went wrong. Weeks after that movie’s release in 1979, it did. A partial meltdown on March 28 at Three Mile Island, near Harrisburg, Pennsylvania, rattled the nation. In 1986, an explosion at a plant in Chernobyl, Russia, and its subsequent radiation contamination of 90,000 square miles galvanized public opinion. Finally, in 2011, a 9.0 magnitude earthquake and tsunami triggered a series of events that led to a core meltdown in three reactors at Fukushima, Japan. This history of rare yet dramatic accidents was enough to sway public sentiment, but the availability of cheap natural gas made the choice easy. Much of the world that once embraced nuclear is now dealing with hundreds of silenced reactors and with cleaning up thousands of acres dotted with steel and concrete hulks and spent fuel. A $222 billion industry has sprung up to decommission these behemoths.

The choreography of unbuilding a nuclear power plant is complicated and ­requires hiring companies and workers that specialize in the process. In the case of San ­Onofre, it’s the Los Angeles-based AECOM and EnergySolutions, headquartered in Utah.

The $4.4 billion project aims to sweep clear most of the narrow 85-acre beachfront site. Workers have already moved the plant’s spent fuel into steel-lined cooling pools. After it has sat there for several years, workers will transfer it to 73 steel canisters and then tuck these inside 25-foot-tall monoliths next to the domes. 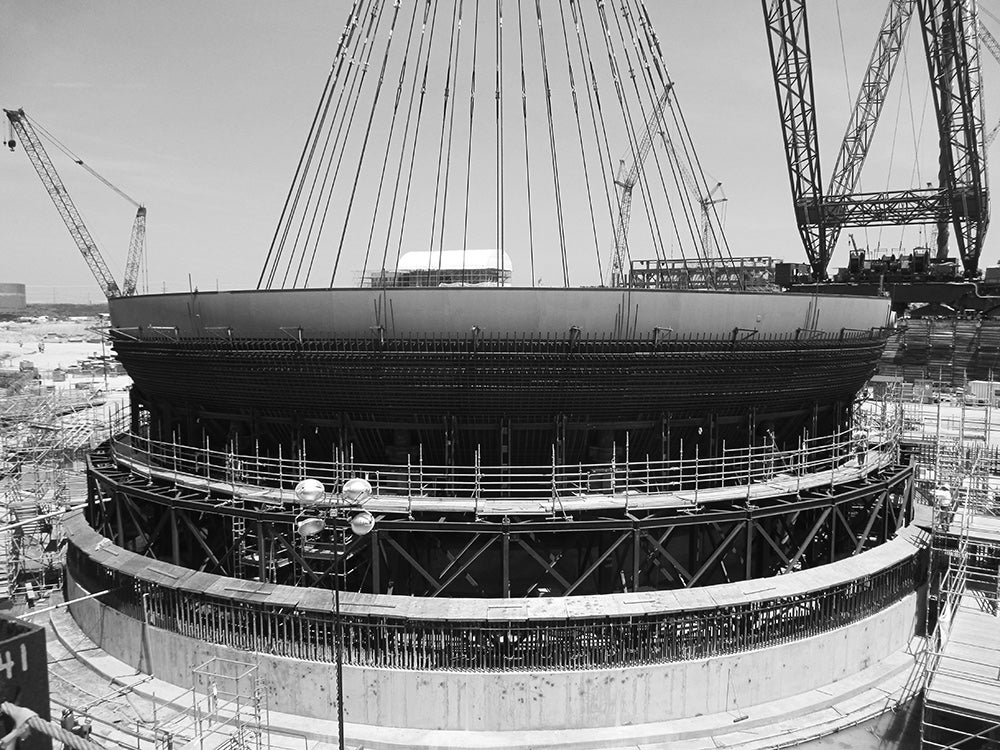 South Carolina utilities have halted work on this reactor.

This repository will sit just 125 feet from the Pacific, behind a seawall that rises 28 to 30 feet above sea level. Its proximity to the coast—and to the 8 million people who live within 50 miles—means many of them want the waste gone. Last April, protesters dressed in hazmat suits and carrying surfboards march-ed through San Diego demanding the waste’s removal. The utility wants it gone too, but it has to keep it safely on-site for now. Tom Palmisano, vice president and chief nuclear officer at San Onofre, says that the storage system, known as dry cask, is designed to withstand an airplane crash, tsunami, even ground acceleration from a nearly magnitude 7.4 earthquake.

Though workers could, in theory, move the casks to a permanent resting place, none currently exist in the United States. The ­Department of Energy is legally bound to take spent commercial nuclear fuel and house it in a permanent spot. But the government never developed a permanent storage place after President Obama scuttled a plan to store commercial and military nuclear waste at Yucca Mountain, Nevada. This past August, the Nuclear Regulatory Commission said it would resume the work needed to eventually open that site. In the meantime, some 70,000 metric tons of nuclear waste is stored across the country.

At San Onofre, workers will place spent fuel in dry-cask storage and then demolish the buildings and offices. First, remotely controlled underwater tools will saw through radioactive steel from inside the empty reactors. Workers will store some of this material on-site for later disposal with the used fuel. They will pack the non-tainted portions—some 75 percent of a total 25 million cubic feet of rebar, concrete, and piping—in steel containers to dispose in the Southwest.

Rail cars will haul low-level radiation debris to specialized landfills. EnergySolutions will cart some of it to its desert facility in Clive, Utah, where workers will bury it beneath thick layers of clay, gravel, and rock.

More of these nuclear graves will cover the landscape as utilities take reactors offline around the globe. And unless renewable energy takes the place of nuclear, more carbon from fossil-fuel-fired plants will fill the air. When San Onofre shut down in 2012, natural-gas-fired electricity plants stepped in—adding 9 million tons of CO2 into the atmosphere in the following 12 months.

Despite the financial pressures from ­natural gas and the growth in wind- and solar-energy production, Cohen holds fast in his belief that the U.S. should give nuclear energy another chance. “There are new technologies in the works,” he says. “This isn’t going to be your father’s nuclear industry. It might fail, and it ultimately might be unnecessary, but it’s worth trying.”

For now, though, the nays have it.

Mary Beth Griggs is an assistant editor at Popular Science. She covers space, geology, archaeology, and the environment.