The Forest Service is asking how it can both expand critical prescribed fire use, and do so safely in a warming world. 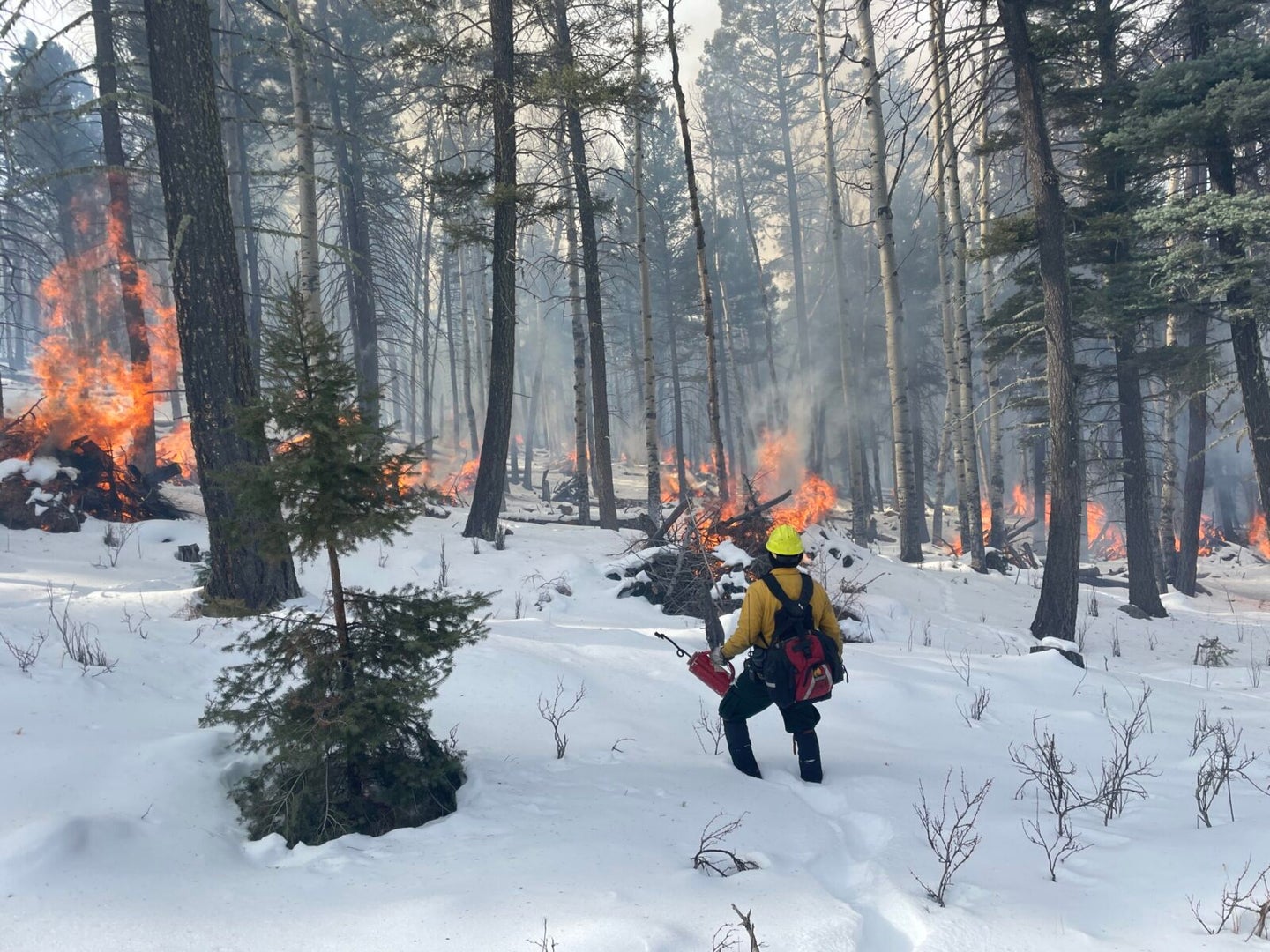 Prescribed burns can clear out undergrowth and reduce the risks of catastrophic wildfire. But the US Forest Service is studying whether increasingly hot and dry conditions make it harder to burn safely. Maurice Cruz/Forest Stewards Guild
SHARE

Last month, the US Forest Service (USFS) announced it would freeze prescribed burn work across all 193 million acres of the land it manages until mid-August.

The decision came on the heels of several prescribed burns that grew out of control in the Southwest US. The biggest of them, the combined Calf Canyon and Hermits Peak fires, have grown to more than 300,000 acres, the largest in New Mexico history. Hermits Peak began when high winds carried a prescribed fire out of bounds, while Calf Canyon grew out of the smoldering embers of a months-old burn.

Nation-wide pauses on prescribed burns aren’t unprecedented. Last August, USFS Chief Randy Moore ordered his agency to immediately extinguish any fires to avoid stretching resources in a year that he described as “different from any before.” What makes the 2022 review significant, however, is that the Forest Service is using the pause to investigate whether climate change requires retooling fire management strategies.

“We’re seeing some really unprecedented type of [fire] behavior … where we have had prescribed fires escape,” Moore said at a May conference hosted by the International Association of Wildland Fire. “So I think we are doing our due diligence, and we owe it to the American people when we see these things happen to pause.”

[Related: What it really means for a wildfire to be contained]

Scientists both in and outside the Forest Service agree that regular, low-intensity burns are an essential tool for reducing wildfire risk. In its 10-year wildfire crisis strategy, partly funded by the 2021 infrastructure bill, the Forest Service states that it must double or even quadruple the scope of its fuel reduction work. While it currently burns or thins about 2 million acres a year, it will need to average another 5 million acres over the next decade to hit its targets.

There’s an inherent challenge in restoring that spark. After a century of fire suppression, the same landscapes that stand to benefit from prescribed burns are also the ones most prone to catastrophic wildfires. And a warmer world, combined with staffing shortages in fire crews, makes planning burns in those areas more challenging.

“In 99.84 percent of cases, prescribed fires go as planned,” Moore wrote in his announcement of the policy.

But politicians have often targeted prescribed burns that go wrong, even if they support fire management policies in theory. Michelle Lujan Grisham, New Mexico’s governor, said in a statement that the Forest Service should “tak[e] full responsibility” for the fires this spring. “The federal government must take a hard look at their fire management practices and make sure they account for a rapidly changing climate.”

Advocates of prescribed fire say that the pause makes some sense.

“Even though I’m a huge proponent of bringing good fire back to the landscape, how can you not take some time to reflect?” says Zander Evans, who lives in Santa Fe, New Mexico, and serves as executive director of the Forest Stewards Guild, a nonprofit that advocates for ecological management of forests.

Yet according to Evans, it’s a mistake to fully blame the Forest Service, which was working to address the overgrown forests that make the West increasingly prone to massive fires. “When you look at the area where Calf Canyon burned, we haven’t been able to do restoration [including prescribed burning] in that area. It breaks my heart,” he says. He contrasts it to the western slope of the same mountain range, much of which has been intentionally burned over the last decade. Last year, when a wildfire popped up there in dry conditions, firefighters were able to contain it.

“This is public benefit work,” says Craig Thomas, the founder of the Fire Restoration Group, which advocates for prescribed burns. “The question that we all need to talk about is: What is our honest capacity to predict change over what time frame, and how reliable is it?”

It’s clear that the rising heat and drought caused by climate change make wildfires more common. But managed fires are based on conditions on the ground, which means they should, ideally, already incorporate climate trends.

Typically, the fire manager—better known as the “burn boss”—writes out a prescription well in advance that specifies the requirements for a burn: from staffing, to the moisture of the forest floor, to the weather forecast. Even then, the boss and a supervisor are supposed to review whether drought or other climate conditions have changed enough to require an amended plan. The burn boss then only greenlights the fire if it meets all the right specs.

When a fire escapes the prescribed boundaries, the Forest Service reviews the problem in what’s called a “lessons learned” report. In the case of the Hermits Peak fire, that will be incorporated in this summer’s federal review, says Julie Anne Overton, public affairs officer for the Santa Fe National Forest, where the prescribed burn was first conducted. But so far, local USFS officials have said that when foresters began the burn, weather conditions and forecasts were within the ranges needed for a safe operation. By their accounts, the fire only escaped  when “unexpected erratic winds” picked up, blowing embers into surrounding forests.

“I think what we need to sort out is: Was it a surprise?” Thomas from the Fire Restoration Group says. “Did something happen that no one could predict?”

Although burn decisions are supposed to incorporate climate trends, there are good reasons to think that prescribed burning might be harder in a more combustible world.

Most of the time, climate change won’t make it harder to predict the weather, says Tim Brown, a climatologist at the Desert Research Institute in Nevada who studies weather prediction, fire, and emergency management decisions.

“I think there are two potential impacts on prescribed fires,” he says. “One is, we are seeing more extreme weather events, and that by itself can make it easy to find yourself outside prescription parameters.”

Still, he says, he doesn’t know the extent to which burn bosses incorporate larger-scale climate data into prescriptions. “We’ve been in a drought,” he explains. “Now, I’m sure [fire managers] are fully aware of that. But does this happen to be the climatological time of year when it’s most windy?” That, in addition to the speed at which a hotter atmosphere dries out plants and soil, could drive rapid changes in fire conditions.

The second impact of climate on prescribed fire has to do with annual fire conditions, Brown says. “Folks are starting to see shorter burn windows.” And that means that more prescribed fires need to be packed into those short bursts.

Thomas also points to the challenges of burning more land in less time. It might take 10 days of prescribed burning to treat a thousand acres, he says; a weather forecast at the beginning of the prescribed burn might not cover the full scope of the project, which means the conditions could change while the fire is underway. With climate change, the risk of that runs higher.

According to an email from E. Wade Muelhof, deputy press secretary for USFS, those are the exact questions the agency hopes to ask in its review.

Muelhof says that the Forest Service is still assembling the team of experts for its prescribed burn analysis this summer, but that it intends to include “climate scientists, wildfire researchers, meteorologists, predictive services and social scientists, fire management officers, fuels management specialists, burn bosses, private practitioners, and tribal representatives for current and traditional ecological knowledge.”

According to Muelhof, the team will tackle questions like: “Is the most current research on climate change informing our prescribed fire program? Do we need to adjust our decision-making due to climate change? Are our models accurately accounting for climate change? Do we let models substitute for instincts as decision-makers?”

At the end of the 90-day review, he says, the Forest Service intends to have a clearer sense of “what may need to be changed with burn plans, [and]  acceptable risk for the agency with prescribed fire.”

As the Forest Service climate-proofs its burning protocols, experts note that it will also have to expand its staffing for fire lines.

Having more hands on deck can reduce the risk of prescribed burns in different ways. Spot fires can be better controlled when there are ample firefighters on site. But just as importantly, the agency can put in extra work during low-risk seasons if it has more staff on call.

[Related: Extreme wildfires are taking a toll on the mental health of firefighters]

For the most part, federal prescribed burn crews are the same people that respond to wildfires. And the Forest Service’s wildland firefighting is already understaffed for 2022: It’s going into this summer with about 1,000 open seasonal firefighting jobs, and still needs to figure out how to implement a pay raise approved by the new infrastructure bill.

Evans, of the Forest Stewards Guild, agrees: When conditions are right for prescribed burns, agencies need to have the staff available to take advantage. “We have to treat prescribed fire like an emergency,” he says. “This past winter, there were a few days we had a decent [snow] dump.” Those storms cut down the chances that a fire would spread, providing a ripe opportunity for burning.

Muelhof noted that’s a gap the Forest Service plans to study as well. “Questions in this area may include if we have enough personnel for the scale of prescribed fire that needs to be done on the landscape, exploring the tension between personnel for wildfire suppression and prescribed fire, and whether our budget policies play into decision making and the ability to react,” he wrote in his email.

Evans says that the Forest Stewards Guild, along with a group of New Mexico nonprofits, has had some success in the last year by hiring a team of local prescribed fire workers who could strike when conditions were right. The group, called the “All Hands All Lands Squad,” was only five people, but supported federal, tribal, and private burns. And that could be a model for burning safely in shorter windows, Evans adds. “We set up this crew so that when we see a storm coming, we have dedicated people who are ready to go.”

Colleen Hagerty contributed to this report.