Arctic Report: How This Small Fishing Village Turned Into a Fossil Fuel Boomtown

Despite heavy regulation and environmentalist pushback 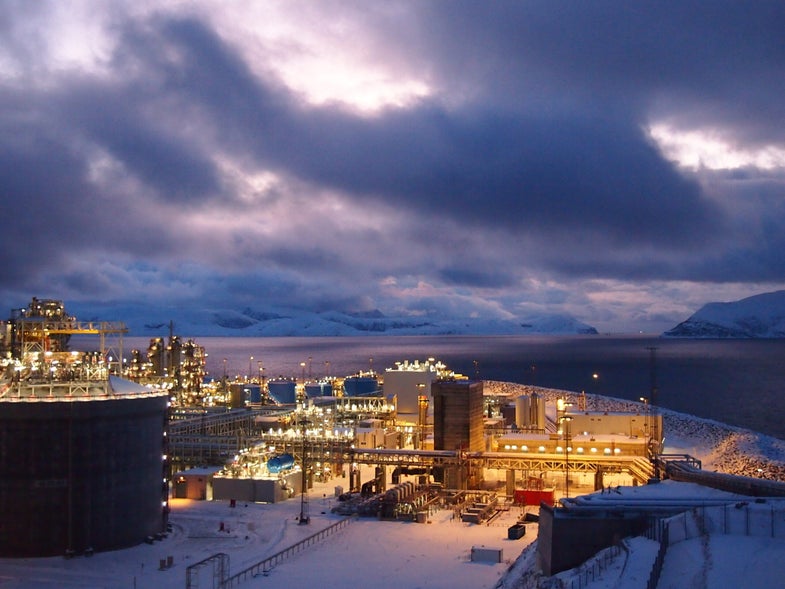 In 1974, the mayor of Hammerfest, Norway declared that his small fishing community—the northernmost town in the world—would one day become the center of the oil and gas industry in the Barents Sea. At that time, the oil and gas executives laughed. Today, the town of 10,000 people is fulfilling the prophecy.

Hammerfest is home to the first oil and gas operation in the Barents Sea. The gas gets pumped 89 miles southeast from the gas fields of Snøhvit through an underwater pipeline. It arrives at a processing plant, which occupies pretty much the entire island of Melkøya—one of the handful that comprise the municipality of Hammerfest.

Walking among the massive structures with a guide and a few fellow journalists, I can assure you that it is an impressive operation. My neck almost hurt from the strain of looking up at its towers.

The plant has been in operation since 2007, and produces enough fuel to fill a tanker ship every five or six days. That means that it produces the same amount of energy every week that the hydroelectric power plant in the nearby town of Alta produces in 1.3 years.

What is Liquefied Natural Gas?

LNG is mostly methane (CH4) that is compressed and cooled to a liquid state. That way it’s easier to transport and store. Because LNG burns cleaner than oil, and produces less CO2, some say it’s the most environmentally friendly fossil fuel there is.

It is also said to have half the environmental footprint of coal. By replacing coal with LNG, it’s estimated that Europe could eliminate 450 megatons of CO2 from the atmosphere per year. Not bad for a fossil fuel.

How the Plant Works

After navigating through multiple security checkpoints with badges and PIN codes, we gathered for a talk with Knut Gjertsen, the director of operations, over coffee and traditional Norwegian potato pancakes called lefse. He says the plant functions like a big refrigerator. Once the gas arrives via pipeline, the CO2, water, and mercury are removed. It is then pre-cooled and liquefied. As a liquid, it takes up only 1/600 the volume it takes up as a gas. But to keep it that way, the LNG has to be stored at -261 degrees F. That’s really cold, even for the Arctic.

For this reason, being located on the Barents Sea is a real advantage. The cold waters can cut the time and cost for cooling down the gas significantly.

To make the operation more eco-friendly, the CO2 extracted from the gas gets injected into the seafloor. This on-site carbon capture and storage is unique among LNG plants, and prevents some 650,000 tons of CO2 a year from entering the atmosphere. That’s the same as taking 400,000 cars off the road.

The Snøhvit plant is one of the most energy-efficient there is, but that doesn’t mean it’s emissions-free. It is still producing fossil fuel, after all. Norwegian legislation now requires the company to pay high fees on all its CO2 emissions. Since their global competitors don’t have such fees, they are a real incentive to be efficient in order to stay competitive. “They don’t pay a dime,” Gjertsen says. “We pay a lot.”

Long before this efficiency and environmental mindset kicked in, though, the decision of whether or not to build the plant was hotly contested. Over a lunch of open-faced sandwiches in the city hall, Alf Einar Jakobsen, Hammerfest’s current mayor, described how it took 22 years for Hammerfest to finally pull the trigger and get the project rolling.

Over the years, as the fishing industry continued to decline and the local population started dropping off, a deal was eventually struck between the city and Statoil, a Norwegian oil and gas company. “Even the fishermen said yes to Snøhvit,” he says. 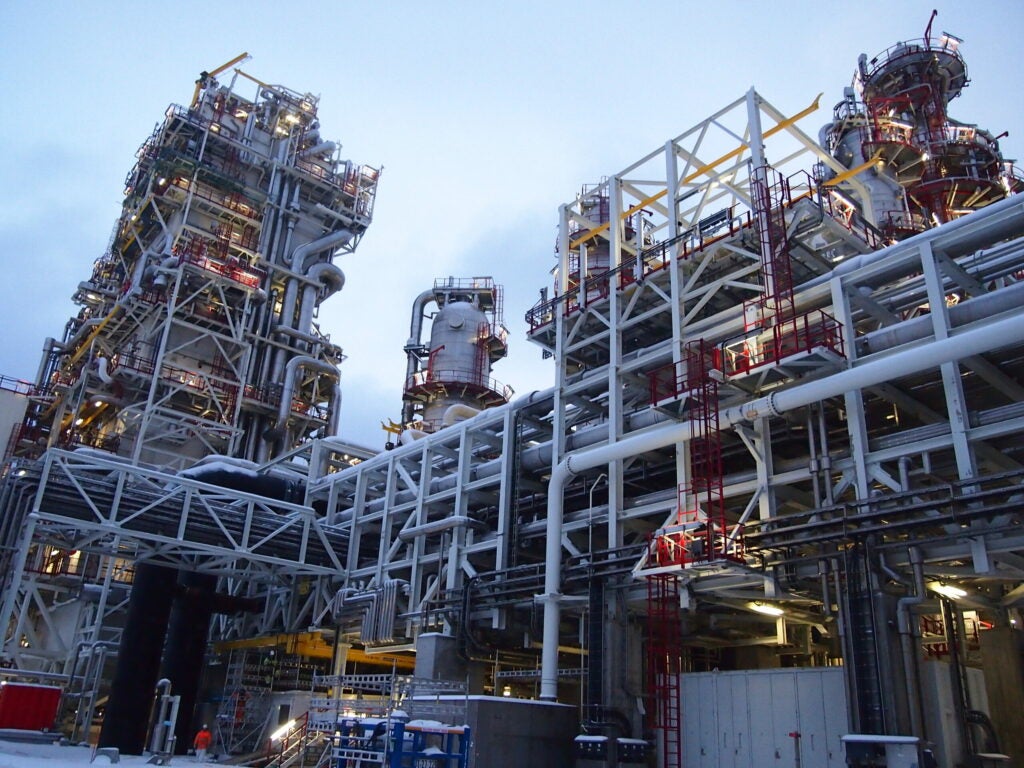 Cooling down the natural gas is a major engineering feat.

Despite the protests of national environmental groups, construction began on the plant in the early 2000s. The city’s deputy mayor, Marianne Sivertsen Næss, remembers seeing fires at the site, and ash raining down on Hammerfest. Having just given birth four days before, Næss was questioning the impact this new industry would have on the blueberries she imagined her daughter picking in the nearby mountains, or the snow for forts she would one day build.

“At the beginning, people asked, ‘God, what have we done?!’” says Roger Kristoffersen, who works in the city’s planning and development department.

But Mayor Jakobsen says the plant cleaned up its act and has since contributed immensely to the town. And not just in the form of jobs. Starting in the 1980s, Statoil paid for special vocational classes to be taught at the local high school. They wanted to prepare their future workforce, of course, but education also improved in the process.

Næss, who, in addition to being the deputy mayor is also the principal of the secondary school in Hammerfest, says the students trained in the chemical process line program are now the most skilled in the country. That may be in part because they have on-site training once a week at Snøhvit.

Today, the city of Hammerfest collects 193 million Norwegian Krone ($22 million) a year from Statoil’s property taxes, which has translated to major investment in the city’s schools, housing, and other infrastructure as well.

Back at Snøhvit, Gjertsen says the plant is doing even better than expected. The gas reservoir turns out to have 100 billion cubic meters more gas than predicted. And the market is paying higher prices than anticipated.

Back when the idea of the plant was conceived, all of its gas was intended for U.S. markets, but since the discovery and exploitation of America’s own natural gas deposits, not a single boat of LNG has been shipped there.

This major shift in the market highlighted another benefit of LNG: its delivery is not dependent on pipelines. It can go wherever the market is. The main customers today are in Europe: the Netherlands, Spain, France, Italy, Lithuania, and others. An LNG tanker can unload at any port with the infrastructure to receive it. 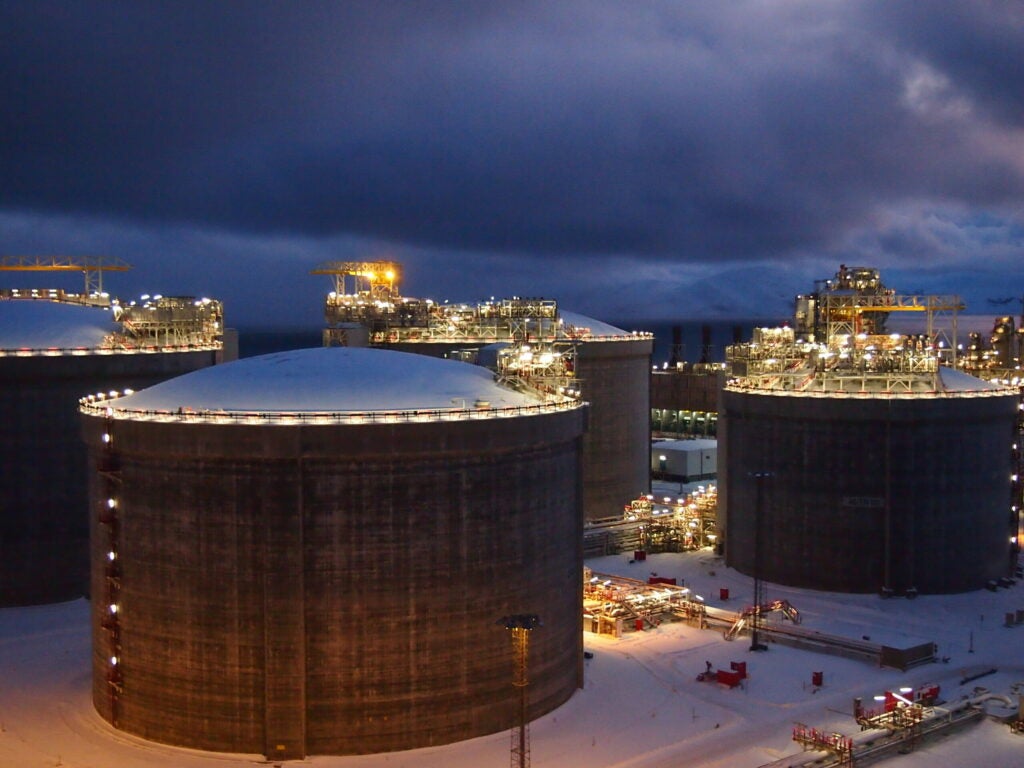 These storage tanks keep the liquefied natural gas at -163 degrees Celsius until the next ship arrives. Each storage container can hold 125,000 cubic meters or 33 million gallons of LNG, but a tanker can hold even more.

The fuel is used to power ferries, factories, and even the tankers that carry it.

Another bonus with gas is that spills are not an issue. Unlike with oil, spills simply can’t happen with gas. That’s not to say that gas leaks aren’t risky. A security guard had to check the condition of my camera battery before I was allowed into the plant, and I was not allowed to bring my cell phone due to the fire hazard. But avoiding an oil spill is always a good thing.

The opening of the plant has also brought other happy surprises, in this case environmental. The kittiwake was an endangered species of bird, with only 40 nesting pairs left on Melkøya when construction began. But the excavation during the construction process created ideal nesting habitat on newly exposed rock faces. Now there are 2,000 pairs of the birds. “This red-listed species is really a pain in the ass for us,” Gjertsen says, laughing.

Both Statoil and the city of Hammerfest are aware that LNG is not a forever thing. Snøhvit should have enough gas to produce LNG through 2050. And then what?

By the time the gas runs out, Hammerfest hopes to have moved on from fossil fuels. “In the end, we want to get to a renewable state,” says Kristoffersen, from the planning department. “We don’t want to be dependent on oil and gas, but they’re financing that transition.”

They’re actively working toward renewables, too. A team of researchers in Hammerfest developed a tidal energy system that powered the grid here for five or six years, says Mayor Jakobsen. It has since been exported to Scotland where the tides are more powerful.

The municipal government has also tried to get wind energy on the hills surrounding the city. But the proposal was turned down since the native Sami people graze their reindeer on those grasses in the summer.

Statoil is investing heavily in offshore wind energy too. And that’s important to Gjertsen. “I’m home free, but my kids are not,” he says. “It does actually matter to me. The world needs energy, and it does make a difference how and where we get it.”