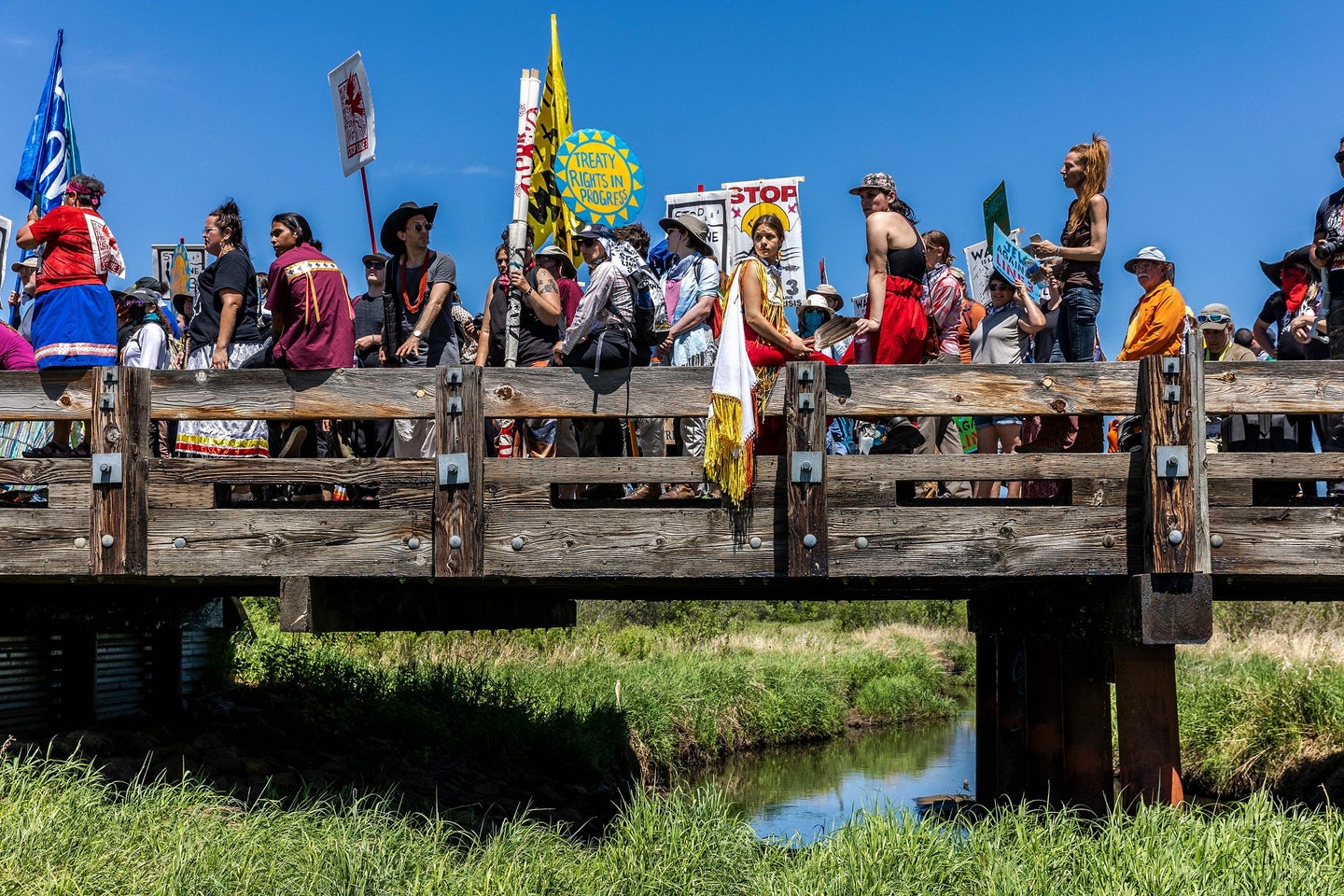 Indigenous groups led protests against the Line 3 pipeline expansion in Minnesota in September of 2021. The project from Enbridge is currently pending. Kerem Yucel/AFP via Getty Images
SHARE

The Environmental Protection Agency (EPA) is moving to restore power to states and tribes to veto energy infrastructure projects that could pollute local rivers and streams.

The Clean Water Act has guaranteed the ability for states and tribes to have a final say on projects like oil and gas pipelines for half a century. But the Trump administration weakened this authority two years ago, stripping local governing entities of their power to protect their region’s clean water supply. Now, the Biden administration is reversing the Trump-era rule.

“One pipeline may be fine, but multiple pipelines may not be,” says Lara Fowler, assistant director of Penn State Institutes of Energy and the Environment. “This ruling gives states a process to actually look at the local conditions and take them into consideration.”

Because of its long, skinny nature, pipeline infrastructure has a large footprint on the land, Fowler says. Depending on where a pipeline is being installed, the project can require the clearing of forests and other wildlife habitat. The construction also often infringes on wetlands and bodies of water that serve as communities’ drinking supply. If a pipeline leaks and pollutes the region’s freshwater, either while it’s being built or once it is operating, it could pose a health and safety hazard for local residents.

The potential environmental harms of pipelines have long been proven. In 2018, a portion of the 40.5-mile Revolution Pipeline in Pennsylvania exploded after heavy rains caused a landslide. The resulting fire destroyed a nearby home, damaged power lines, and burned several acres of surrounding woodland. Energy Transfer, owner of the pipeline, was charged with nine counts of environmental crimes related to construction of the natural gas system this February.

In a more recent case, the 350-mile-long Mariner East Pipeline spilled more than 20,000 gallons of drilling mud into Pennsylvania’s Marsh Creek Lake. The August 2020 disaster was just one of several issues with the natural gas pipeline, also owned by Energy Transfer. Throughout its construction, the project caused dozens of drilling mud spills into wetlands and waterways, dangerous sinkholes, and drinking water contamination at 22 sites in 11 counties across Pennsylvania. Energy Transfer was charged with 48 crimes related to the construction of the pipeline in October 2021. But construction was able to continue, and the pipeline was completed this February.

These cases in Pennsylvania showcase why states and tribes should be able to conduct their own environmental impact analysis and veto potentially harmful projects. Section 401 of the Clean Water Act gives states and tribes the power to “prevent, reduce, and eliminate pollution of their waters,” says Jennifer McKay, policy director at Tip of the Mitt Watershed Council, a nonprofit dedicated to protecting water resources throughout the Great Lakes Basin. The Trump-era revision of this section “severely curtailed the ability for states and authorized tribes to carry out their duties,” she adds. “Ultimately, it threatened the ability for states [and tribes] to protect their own water quality.”

Specifically, the revision limits the time states and tribes have to review a project to one year. It also confines these non-federal governments from considering anything other than water quality when judging permits. These restrictions aimed to “curb abuses of the Clean Water Act that have held our nation’s energy infrastructure projects hostage, and to put in place clear guidelines that finally give these projects a path forward,” said then-EPA administrator Andrew Wheeler when he first announced the ruling back in June 2020.

Although Section 401 does not explicitly target fossil fuel projects, some states have used their authority to stop or delay such developments. In 2017, Gov. Jay Inslet of Washington used the power granted by the Clean Water Act to deny a permit for a coal export terminal on the Columbia River, citing the risk of significant spills and negative effects on air quality. In 2020, then-Gov. Andrew Cuomo of New York used the same authority to reject a natural gas pipeline project, citing the company’s inability to demonstrate that it could comply with state’s water quality standards.

“The Trump administration had an order to promote economic development and encourage pipeline development, and they felt this particular rule—which had not been changed in 50 years—stood in the way,” McKay says.

The polluting of clean waterways is not the only concern around pipeline projects. The installation of such infrastructure can cause significant damage to nearby ecosystems, harming crucial wetland habitat and displacing threatened or endangered species. Pipeline projects can also detract from farmland health and tribal resources like wild rice. Several studies have found that in areas where pipelines are laid out, soil health deteriorates and crop yields decrease.

Once the EPA’s new rule is finalized, states and tribes will have the opportunity again to analyze the potential environmental impacts of energy infrastructure projects. Fowler says she is “heartened” to know that states will have that power back; in many cases, states have stricter environmental standards than those of the federal government. She also notes the importance for tribes to have this veto power, as they are considered to be sovereign governments by federal law.

The pipeline issue is one that pulls in the interests of many stakeholders, ranging from domestic to international, public to private, public health to wildlife conservation, and state to federal. “No state is blind to energy needs,” Fowler says. “Where we draw the line is a hard question, but one we need to be really creatively thinking about. How do you balance the various concerns and values that are at play for something like this? How do you facilitate energy production and development while minimizing impacts?”

The proposed rule still needs to go through a 60-day period of public comment and review before it is finalized. The plan is to have it finalized by spring 2023, McKay says. After that, the people living closest to pipelines and other disturbances would finally have the power of choice again.