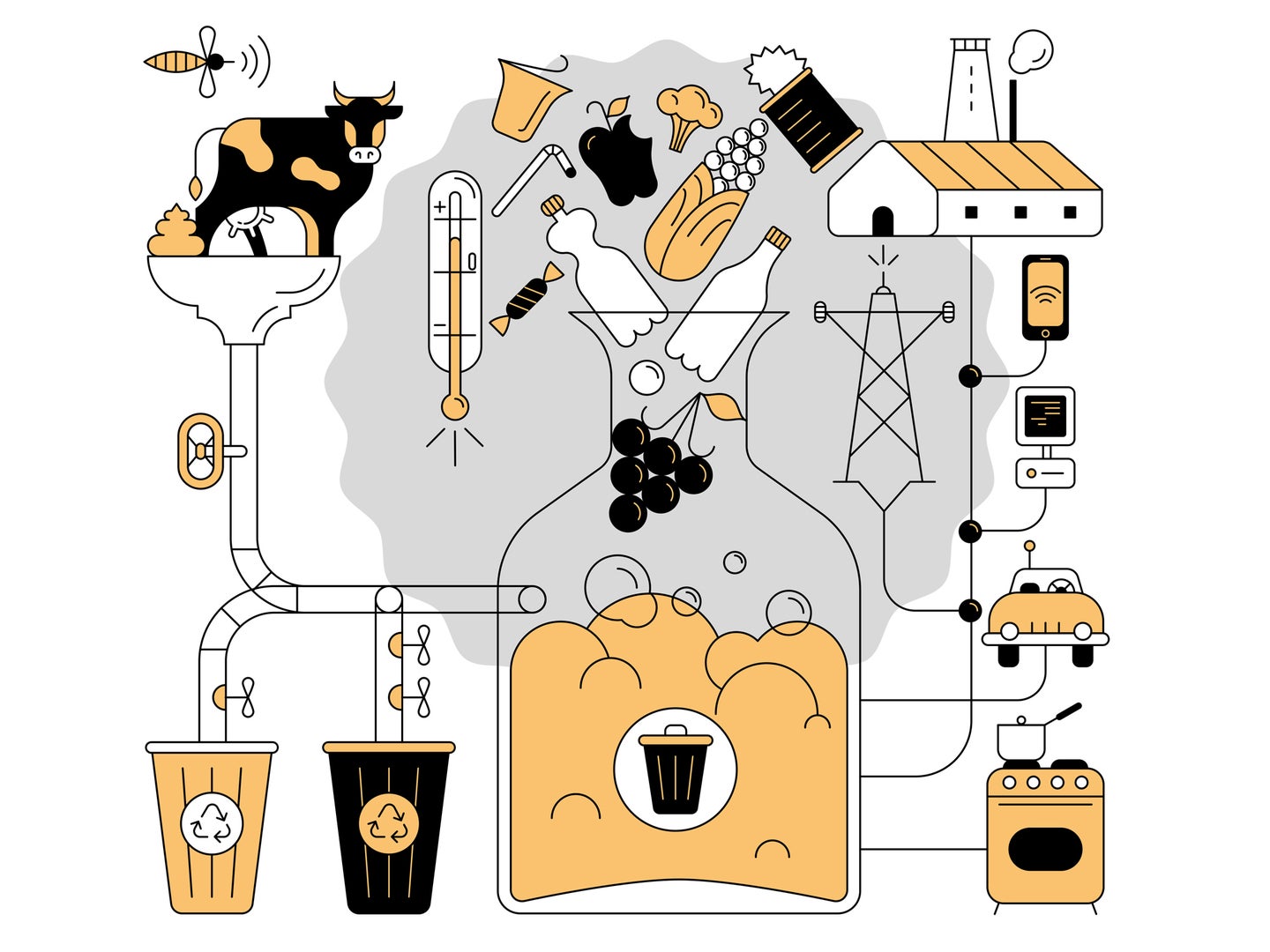 Trash can be fuel too. Katie Gorbacheva for Popular Science

Is trash a form of renewable energy?

Can the power grid run on garbage, safely and effectively?

OUR ENTIRE SOCIETY runs on garbage, at least in a manner of speaking. Eons-old junk—coal and oil that began as ancient plants and dinosaur remains, among other dreck—has powered our electric grid since the beginning of the industrial age. Of the 3.8 trillion kilowatt hours of electricity the United States used in 2020, most came from fossil fuels. The problem is that this trash isn’t meant to keep lights on or charge up EVs; it’s supposed to stay deep beneath the surface, locking away the gases that now flood our atmosphere and cause disastrous warming.

The good news—and bad news—is that we’re making new batches of carbon-rich refuse all the time. In 2018, the average American generated an unsavory 4.9 pounds of waste every day. Could these fresh trash heaps help replace our dependence on dead dinos?

We already know, of course, that we can burn carbon-based products for energy. But simply setting trash aflame has its own nasty side effects. Incineration plants, which have been running in the US since 1885, emit nitrogen oxides, sulfur dioxides, particulate matter, lead, mercury, and dioxins, among other toxins. They also belch greenhouse gases out the wazoo: more than half of what coal spews. The process isn’t even very efficient, extracting just a fraction of the refuse’s potential power. “A lot of energy escapes in the process,” says Johan Enslin, executive director of the Energy Systems Program at Clemson University.

Luckily, firing up trash, be it new or millions of years old, isn’t the only way to turn it into fuel. Take natural gas: Deep beneath the earth, organic matter breaks down and compresses to form methane (chemically, CH4). We call that byproduct natural gas, which has run a chunk of the grid since the 1960s, and which today contributes more power than coal and oil combined.

Our heaps of castoffs mean we’ve got that same gas topside too. Deprived of oxygen in landfills and manure ponds, modern waste breaks down into methane more or less the same way as the ancient subterranean stuff. There’s plenty of incentive to trap that gas: Methane is more than 25 times as potent as carbon dioxide in terms of trapping heat in the atmosphere, and municipal solid waste landfills are the third-largest source of human-related CH4 emissions in the US.

Enter biogas, a combination of the carbon dioxide and methane that naturally creep up out of moldering garbage. Humanity has tapped these landfill burps in various forms since the late 1800s, and today more than half of the EU’s biogas production goes toward generating electricity.

There are a couple of different methods for turning that junk into voltage. The oldest involves a vessel called an anaerobic digester: Organic matter goes into an oxygen-deprived tank, where it breaks down over the course of days or months. The resulting gas is often used to power internal combustion engines or turbines that produce electricity and heat. Biogas can also generate voltage through fuel cells, which tap a chemical reaction to separate hydrogen atoms into electrons and protons. The negatively charged particles then run through a circuit, creating energy with fewer emissions than combustion.

Farms and wastewater treatment facilities could hold the key to boosting American usage. At present, just 20 dairies and livestock operations around the country turn their dung into power, which nets only around 173 million kilowatt hours—scarcely enough to keep the country alight for 30 minutes. But the EPA estimates there are more than 8,000 farms across the US that could plausibly recover biogas. That would rake in another 16 billion kilowatt hours of energy each year. And as of 2017, just 860 wastewater treatment plants in the States used their gold mine of garbage for biogas energy, leaving more than 15,000 other facilities to send similar sludge off to dumps and incinerators instead.

Sure, closing that gap still wouldn’t give us close to all the juice we need. But toasted trash could fill in a missing piece of the renewable energy puzzle. On days when the sun barely shines and the wind doesn’t blow, animals—and humans—will continue to poop.

Unlocking that potential will largely come down to making policy changes. The rest of the world has already shown us how it’s done. In 2009, the EU mandated that 20 percent of the bloc’s energy come from renewables, and as early as the 1990s, countries like Germany were using incentives to get greener power on the grid. So it’s no surprise that in 2015, the EU produced around half of the globe’s total biogas. With the Biden administration’s new goals of making the stateside power sector “carbon pollution-free” by 2035, the US may have a chance of catching up.

Even before White House mandates, the number of renewable-natural-gas-to-pipeline projects shot up from 219 to 312 between early 2019 and late 2020. According to the Environmental and Energy Study Institute, renewable methane and biogas sources could one day replace 10 percent of the natural gas used in the United States.

So could we ever run the entire electrical grid using nothing but garbage? Probably not. And wind, solar, and hydro arguably have the potential to power the whole thing on their own. But tapping the planet’s junk could help us make the most of methane that would otherwise keep filling our atmosphere. We just need to make sure we learn from the mistakes we made powering all our cars and factories on dinosaurs.

Ask Us Anything
Energy
Sustainability
membership