The EPA has ignored reports that Superfund sites are not resilient to climate change, and communities are at risk. 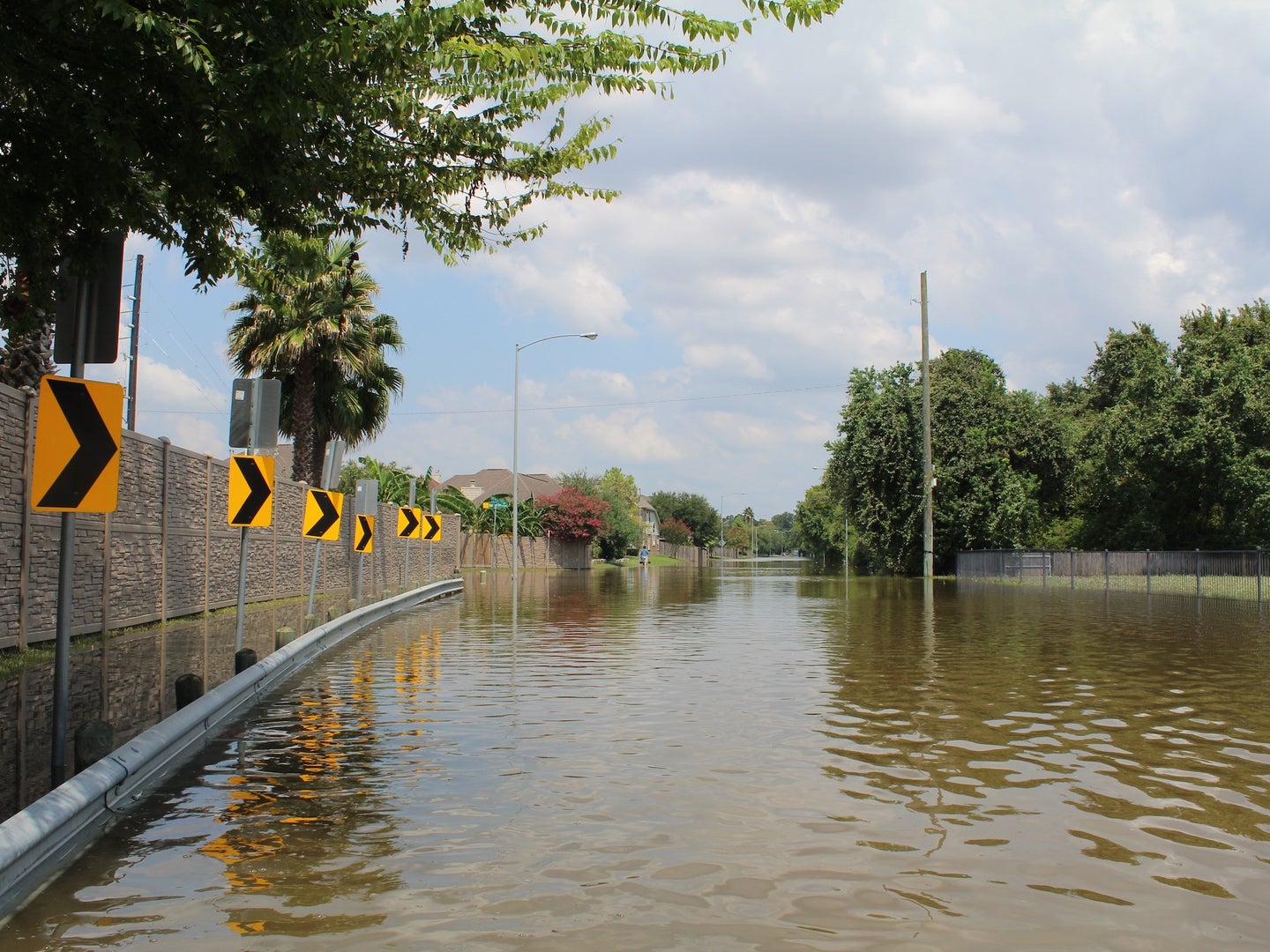 Hurricanes can be made exponentially worse by whatever lies in their path. Unfortunately, that’s often the toxic waste of some of the most extractive, pollutive industries.

Take Hurricane Florence, for instance. The storm’s intense downpour triggered the spill of coal ash, the arsenic-laced substance that remains after burning coal, from a coal-fired power plant in North Carolina. Hurricane Harvey’s torrential waters also quickly turned toxic with industrial chemicals, including dioxin—a chemical linked to cancer and reproductive issues—released from a heavily contaminated, abandoned paper mill along the San Jacinto River in Texas. Hurricane Sandy’s vicious waters caused Newtown Creek, one of the most polluted waterways in the country, to overflow into the surrounding Queens and Brooklyn communities.

As climate change spurs worsening hurricanes, it comes with an increased potential for toxic waste to be unleashed on nearby communities, which are more likely to be low-income neighborhoods of color. It’s a danger worsened by the fact that the Trump-led Environmental Protection Agency (EPA) has moved significantly slower than other administrations in cleaning up Superfund sites, some of the most contaminated land in the United States. This year came with additional delays, given that regional EPA offices opted to reduce or suspend clean-up on some Superfund sites.

This creates a situation where the worst sites of toxic waste are vulnerable to being swept away by a storm, despite noted risks. In late 2019, the U.S. Government Accountability Office (GAO), a federal watchdog for government agencies, issued a report that recommended that the EPA take additional actions to mitigate the risks that climate change poses to Superfund sites. The report found that 945 Superfund sites on the National Priorities List, comprised of the sites that pose the largest threat to public health, are threatened by climate change. Of these sites, 187 are at risk of being flooded by a Category 4 or 5 hurricane. The report only looked at nonfederal sites; if federal sites were also included, the figure would likely be larger.

The GAO report was well-timed. It was released more than 6 months before the current hurricane season, giving the EPA time to prepare for what now looks to be one of the most severe in decades. Yet, EPA officials disagreed with the report’s finding that climate change needs to be more consistently integrated into how the agency manages and evaluates risk at Superfund sites. “The EPA believes the Superfund program’s existing processes and resources adequately ensure that risks and any effects of severe weather events, are woven into risk assessments at non federal NPL sites,” the EPA wrote in a letter to Alfredo Gomez, the director of the GAO’s natural resources and environment team.

The report recommended that the EPA’s administrator, Anthony Wheeler, provides clarity on how climate change’s potential impacts to Superfund sites are included in the agency’s strategy, which does not mention climate change. In response, EPA officials referred to its agency-wide objective, “Revitalize Land and Prevent Contamination,” to manage exposure risks from contaminants. The GAO was not convinced by this explanation: “This strategic objective does not include any measures related to climate change or discuss strategies for addressing the impacts of climate change effects,” Gomez wrote in an email to Popular Science. “Consequently, we believe that our recommendation is still warranted.”

The EPA does plan on taking up the report’s recommendation of more clearly defining Superfund site boundaries, as stated in the letter.

It’s not the first time the Trump-led EPA has sidelined future climate impacts when considering the risks posed to Superfund sites. The EPA conducted its own analysis in 2018 of Superfund sites in the areas deluged by Hurricane Harvey, Hurricane Maria, and Hurricane Irma, and concluded that existing remedies to prepare for extreme weather are “resilient.” Yet this report relied on limited data and didn’t account for future scenarios of worsening climate impacts. “It is important to note that the information that was available for this study was not comprehensive and in some cases very limited,” states the report’s authors.

Just before Hurricane Harvey made landfall in Texas, the Trump administration also rescinded a 2015 executive order to use updated climate data in analyzing flood risks for federally-funded projects, including Superfund sites. “Essentially what that would have allowed you to do is identify Superfund sites that would be potentially at risk from extreme flooding in the future,” says Jacob Carter, a research scientist at the Union of Concerned Scientists who worked on the executive order while at the Obama-led Environmental Protection Agency. This data also would have allowed the EPA’s project managers to better prepare for such floods in the future, given the degree of sea-level rise expected in different areas.

In a recently published analysis, based on research originally authorized under the rescinded executive order, Carter found that nearly 1,000 Superfund sites located near the east coast and Gulf coast are at risk of extreme coastal flooding in the next 40 years, assuming greenhouse gases steadily rise. It’s data that was not included in the EPA’s 2018 analysis of Superfund sites’ resilience, for instance.

Carter says this is all part of a broader pattern of the suppression of climate science at the EPA, which is enforced from the top-down. “There is this fear that if you discuss climate change issues, like those that may be posed to Superfund sites, publicly or even in a meeting, you may be at risk of retaliation.” It’s a culture that he documented in an April report based on surveying 63,000 scientists at federal agencies.

Without consistently integrated knowledge of how climate change impacts Superfund sites, the EPA could be adopting remediation strategies for Superfund sites that fall short of addressing the increasingly overlapping threats of toxic land and extreme floodwaters.

The abandoned paper mill along the San Jacinto River is an example of what can happen when climate change isn’t fully incorporated into the site’s remediation plan. Initially, the toxic pits were secured with a cap to prevent the release of toxins, an emergency stopgap measure that the U.S. Corps of Engineers concluded could withstand catastrophic events in a 2015 feasibility study. The companies liable for the site’s contamination, and responsible for cleaning up the site in a negotiated agreement with the EPA, argued that such a measure should be permanent — a much cheaper route than fully excavating the pits of chemicals.

Yet Sam Brody, a flood scientist at Texas A&M, argued in 2016 that the cap wouldn’t hold based on his earlier research on future climate impacts to the polluted site. “The threat of future surge and riverine flood events coupled with a changing climate and increasing development all have a ratcheting effect on the amount of impact this Superfund site could inflict on surrounding communities,” wrote Brody in a 2014 report.

As the land surrounding the site continues to erode, compounded by the impacts of the hurricanes, Brody described a scenario where the chemicals would remain vulnerable to leakage. Tragically, he soon proved to be right: The cap gave way in the face of Hurricane Harvey’s treacherous waters in 2017.

Brody’s report helped build the case for a strategy aimed at fully removing the contaminated material, while using a temporary, watertight enclosure known as a cofferdam to isolate the site of toxic waste, explained Jackie Young-Medcalf, the founder of the Texas Health and Environment Alliance, which has been advocating for a stronger rehabilitation plan for the Superfund site. “The first pivotal moment for the Superfund site was Dr. Brody’s report,” says Young-Medcalf.

Until the clean-up is fully complete, Young-Medcalf says that toxins could breach during a hurricane and pose a continued risk to the surrounding community that has documented high rates of cancer. “The only certainty that we can have for the protection of public health in the environment is full remediation,” she says. Yet she notes, “we’ve made progress at this site in the last 10 years that a lot of Superfund sites don’t see in 20 or 30 years.”

This slow clean-up process, coupled with often insufficient protections for hurricanes, makes it so toxins held at bay now are more likely to be unleashed in a future storm. Willis Elkins, an executive director at the Newton Creek Alliance, a community organization dedicated to monitoring and restoring Newton Creek, fears what the likely event of a major hurricane could bring to the polluted creek and nearby community. “We’re in a very precarious position,” said Elkins. If another Hurricane Sandy were to hit, he says the creek is not ready.