How we can burn our way to a better future

We desperately need wildfires to restore many of the forests in the Western US. 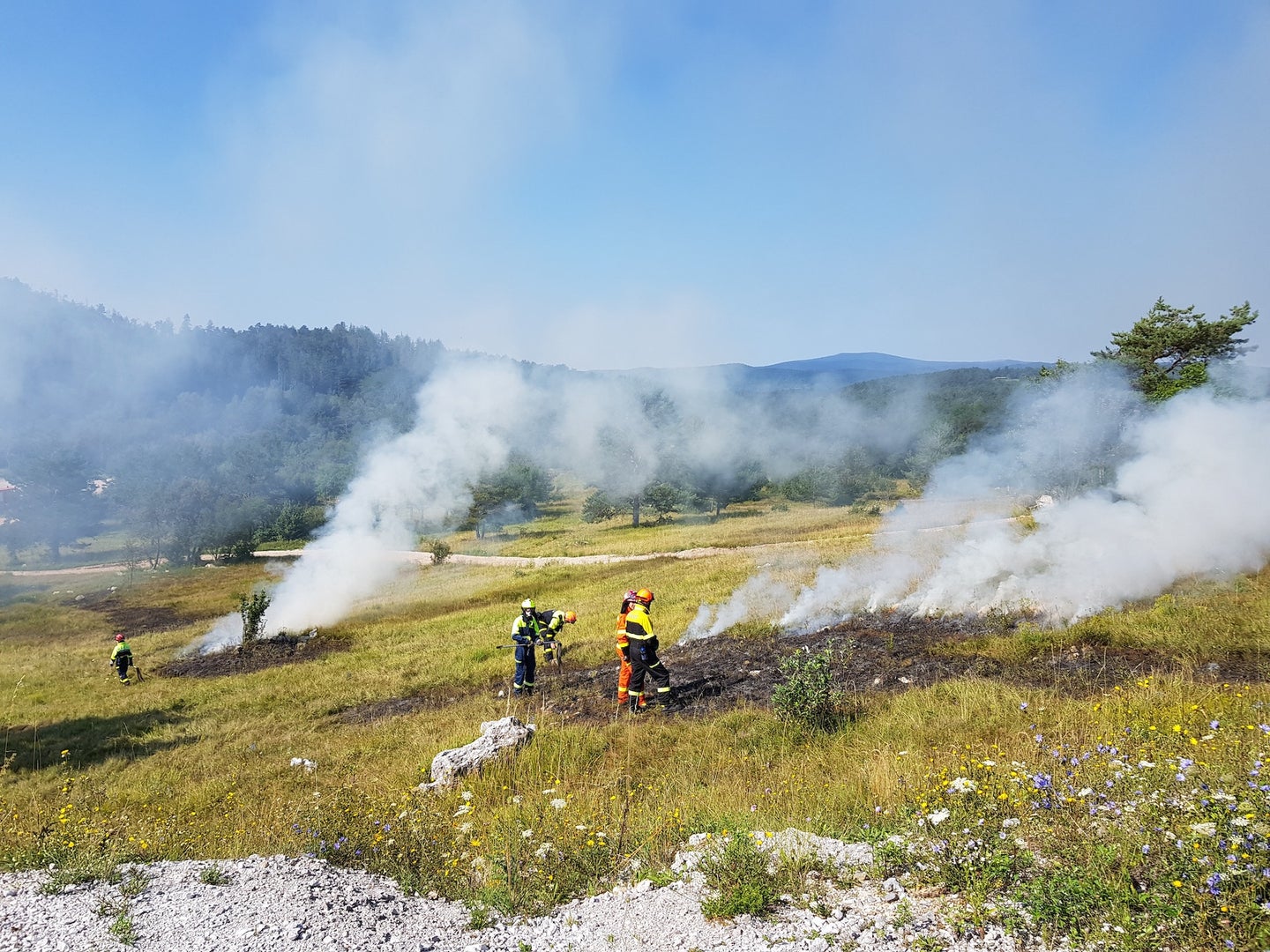 The West is experiencing continually record-breaking flames, but the solution is more fire.

Even with the massive fire totals of 2020—over five millions acres across the West Coast—there will be no break next year. Many more millions of acres of forest across the western states are fire-starved, meaning they are missing the historic lower-intensity fires that once punctuated their landscapes, consuming dry litter and smaller plants but mostly leaving mature trees intact. Without that help of flames occasionally licking up those fuels, megafires won’t cease.

That’s why experts say that we need prescribed burns now more than ever. It’s a complex topic that many people are only just starting to hear about, but ecologists and Indigenous peoples are well aware of exactly how helpful the practice can be.

The case for fire

Prior to Euro-American settlement of western lands, fire was a fact of life. In California alone, more than four million acres burned annually on average. Hazy summer skies were not unusual, and in fact might have been beneficial at times. In the Klamath River Basin, the Native Americans used fires in part to produce smoke that shaded the region and cooled river temperatures, enhancing salmon habitat. Lightning also ignited regular fires.

Many, though not all, ecosystems in the American West are adapted to fire. Lower elevation conifer forests in the past may have burned every 3 to 30 years, and oak woodlands and savannah had even more frequent fires. Some higher elevation forests probably also had blazes, though the interval between flames was somewhere around 40 to 80 years, explains Kip Van de Water, a fire management specialist with the Forest Service in Klamath National Forest.

Fire has a profound influence on these systems. Some seeds literally can’t sprout without it. A serotinous cone, for instance, produced by certain pines, won’t free its seeds until it’s heated up. You can see that process occurring in a toaster oven in the video below.

Fires also open up clearings, letting sunlight reach teeny trees so they can grow. The flames also release nutrients into the soil. There are many more benefits, but one that’s less often paid attention to—and more unusual—is the impact on plants’ immune systems. Sharon Hood, a Forest Service research ecologist in Montana, explains that flora have immune systems analogous to those of fauna, and in fire-adapted ecosystems, fire stimulates that immunity. Low-severity embers can ramp up a tree’s response such that it’s better equipped to fight back bark beetles, native parasites than can devastate entire stands of conifers when the trees are already weakened by forces like drought. Without those fires, they’re more vulnerable.

There are a few ways that we can return fires to lands starved of it. At the Forest Service, Van de Water explains that fire crews use two main methods: broadcast burns and pile burns.

In a broadcast burn, numerous workers are on the ground, digging out fire lines—areas where the ground has been scraped to act as a barrier to further fire travel—and lighting a blaze with drip torches, hand-held canisters that drizzle flaming fuel onto the ground. There are firefighters on standby in case the burn jumps its boundary. Having the right conditions is crucial. An ideal window is when winds are calm and temperatures are cool, and fires are usually planned ahead of rainfall to put a natural end to the treatment. Prescribed burns burn at a lower intensity, eating up debris and twiggy materials but leaving bigger trees intact.

Pile burns involve heaping up dry fuels from a given area, then burning them. It doesn’t provide all the ecosystem benefits that burning the whole area would, but it can still help reduce catastrophic fire risk. Van de Water says that most of the acres he treats in Klamath National Forest are done via pile burns. That’s because it can be cheaper, requires fewer people on the ground, and can be done across a wider weather window. “It’s easy to write a contract for piling and burning, and then hire a private company with people with chainsaws to do them,” he says.

There’s also “managed wildfire,” which means letting non-prescribed fires burn while being closely monitored. There are vast expanses of wilderness land in the West where this is feasible, and this practice has been used more often in recent decades. In some areas, it’s far more practical because there are simply no roads to access a site needing a burn.

Native American tribes also have traditional ecological knowledge of how to conduct burns, methods which they developed over thousands of years of managing their lands. After more than a century of being barred from performing their burning, there have been some moves in recent years to return the practice. The Karuk Tribe has developed a climate adaptation plan for their territory that focuses heavily on restoring cultural burning practices. The Yurok Tribe in northern California has been able to buy back their traditional lands through carbon credits they earned by maintaining forests with prescribed fire. And North Fork Mono tribal leaders are partnering with officials to bring the benefits of fire back to the oak woodlands of the Sierra Foothills.

Why we don’t do it enough

All of these current efforts are just a sliver of the millions of acres that need fire. And areas that do get a prescribed burn often don’t get a follow-up fire treatment. In the Northern Region of the Forest Service’s jurisdiction—covering 23 million acres of land in Washington, Idaho, Montana and the Dakotas—only about 30,000 acres are treated every year, says Robert Keane, an emeritus research ecologist with the Forest Service and editor of the research journal Fire Ecology. “We’re not gaining on the [fire] deficit.”

Keane says that a major roadblock is pushback from communities adjacent to areas planned to burn. Some are afraid their homes are at risk if a fire escapes its bounds, or that the smoke will harm their health. However, the evidence suggests that planned burns rarely escape, and that their smoke is not as hazardous as that from the high-intensity fires that ignite when forests don’t receive treatment. “When society doesn’t want this to happen, we’re ensuring we’re going down this spiral,” says Keane. “And then a big fire will happen and it will burn an ecosystem.”

Survey work has found that the public is mostly accepting of the prescribed burns, however, points out Kate Wilkin, fire ecologist at San José State University. The main impediments are personnel time and money, researchers have found.

Indeed, the budget for maintenance has not been helped by the megafires of the past decade. Fire suppression once used only eight percent of the Forest Service’s budget, but Keane says it now sucks up over half the money available. That means there’s less funding left for proactive treatments.

Individuals in charge of planning fires might also be reluctant to do so, because the risk of being held liable if anything does go wrong. It’s a thankless job. People don’t see the absence of fires and thank their local officials for periodically burning the land. Burn leaders generally aren’t celebrated for helping avoid a fire in the same way firefighters receive gratitude for their work, points out Keane. And when something does go wrong, burners can be held legally liable.

How to restore fire

For some solutions, we might look across the country to Florida. Prescribed burns are the norm there. Fires are heavily used because fuels build up so fast due to the ample moisture available for plant growth, says Hood. Part of what makes it possible to do these treatments is that Florida has ‘right to burn’ laws that reduce liability for people planning a burn. “Liabilities are reduced if you go through all the right steps,” says Hood. “You’re not as likely to be held liable in the Southeast compared to the West … So it really promotes the use of prescribed burning.”

Due to a century of fire suppression, many forests in the West are incredibly dense with trees, which can make it especially hard to do a controlled burn because small trees can act as “ladder fuels” and help transport fire into the canopy. Wilkin says that these regions may need thinning treatments to cut out some of the trees to reduce that risk before bringing in fire.

Increased funding dedicated for forest treatment can help, too. Recently, burners have been able to apply for funds derived from California’s cap-and-trade climate program. Van de Water is part of a team at Klamath National Forest that just received such a grant for a proposed burn in the Klamath region.

Because of their traditional knowledge honed over millennia, “tribes are uniquely positioned to lead the way,” wrote University of Oregon researchers in an article at the Conversation. However, they still face barriers in being able to conduct burns. “We’ve been trying to work within existing processes to make it all come together,” says Bill Tripp, the director of natural resources and environmental policy for the Karuk Tribe. “We’ve been pretty successful in starting to make some changes and getting more thinning and pre-burn treatments done. But we’re struggling to get through the agency bureaucracy far enough to even burn piles.”

Due to hurdles such as environmental impact reporting requirements, the tribe is only able to burn on the two percent of their territory that is not overlapping with national forest land. “I believe it’s time for the federal and state governments to recognize Indigenous sovereignty and start to take a hard look at how that relationship … can build the coalition needed to make all this [prescribed fire] work,” says Tripp. “If we can get back there within three years and start to rebuild our Indigenous fire management cycles and get those into place, we’ve got a shot at making this happen.”

This story has been updated to provide further detail on how and why pile burns are used.