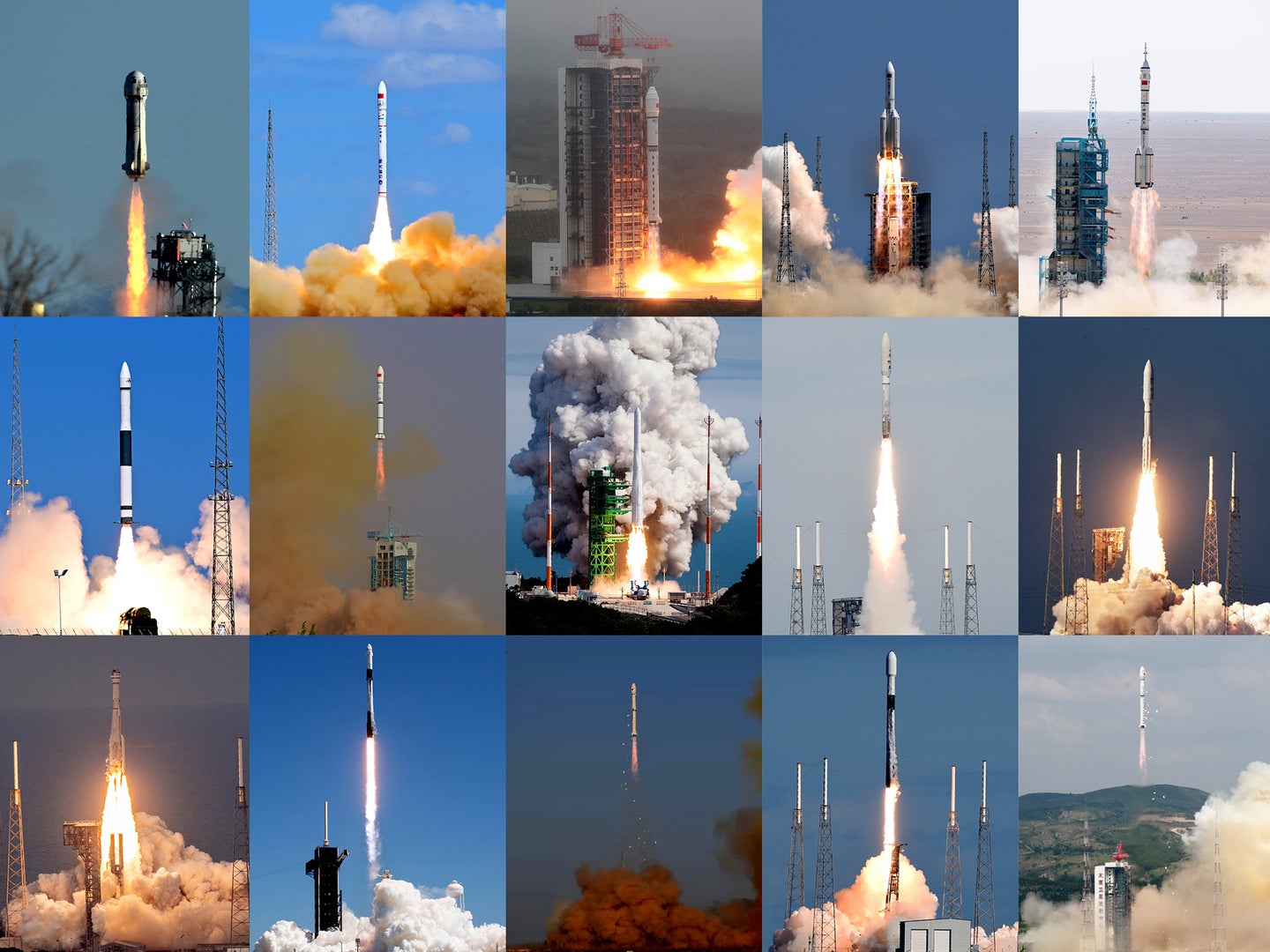 Rocket fuel might be polluting the Earth’s upper atmosphere

With more spaceships launching than before, engineers are looking for alternative rocket fuels that leave less gunk in the air.

ON A FOGGY midsummer morning 54 miles northwest of Santa Barbara, California, SpaceX engineers hustled through a ritual they’d been through before. They loaded a Falcon 9 rocket with tens of thousands of gallons of kerosene and supercold liquid oxygen, a propellant combo that brought the craft’s nine Merlin engines roaring to life with 1.7 million pounds of thrust. Soon after, the machine shot through the stratosphere, ready to dispatch 46 of the company’s Starlink internet satellites into low Earth orbit. But the rocket made another delivery too: a trail of sooty particles that lingered over the Pacific hours after blastoff.

The launch was the company’s 32nd of 2022, maintaining its current pace of firing off close to one rocket per week. With a record number of rides shuttling equipment, astronauts, and über-rich tourists to and from Earth, the high skies have never been busier. Between government programs like China’s Long March and private shots like SpaceX’s Crew Dragon, the world tallied some 130 successful launches in 2021 and is on pace to finish 2022 with even more. Many trips, however, spew tiny bits of matter into the stratosphere, an area that hasn’t seen much pollution firsthand yet.

Climate scientists are still working to fully understand how rocket residue affects the planet’s UV shield. But even if they find warning signs, some organization or authority figure would have to step up to establish emission standards for the industry. In the meantime, a few aerospace companies are exploring sustainable alternatives, like biofuels, to power their far-flying systems.

The increasing frequency of launches has researchers like Martin N. Ross, an atmospheric physicist and project engineer at the Aerospace Corporation, a nonprofit research center in California, worried about the future of the stratosphere—and the world. Predictions for rocket traffic in the coming decades point dramatically up, like a Falcon 9 on a pad. Should the sun heat up enough of the particles from the fuel trails, as some computer models suggest it will, space travel could become a significant driver of climate change. “This is not a theoretical concern,” Ross says.

Unless you are reading this while floating aboard the International Space Station, you are breathing air from the troposphere—the bottommost band of the Earth’s atmosphere, which extends upward for several miles. The layer just above that, the stratosphere, sits anywhere from 6 to 31 miles above sea level and is deathly dull by comparison: There are barely any clouds there, so it doesn’t rain. The air is thin and freezing and contains ozone, an oxygen-based gas that protects all life from solar radiation but is toxic to the lungs.

Most greenhouse gases, including the 900 million tons of carbon dioxide produced by the aviation industry each year, trap heat in the troposphere. But rockets rip their vapors at higher altitudes, making them the single direct source of emissions in the upper stratosphere.

Acid in the sky

The stratosphere was people-free until 1931, when Swiss physicist Auguste Piccard and his aide floated nearly 10 miles up, and back down, with a 500,000-cubic-foot hydrogen balloon. They were the first of many. By the 1960s, the US and Soviet space programs were regularly shooting rockets to the edge of the sky.

As astronaut and cosmonaut programs evolved during the Cold War, so did climate change research—especially studies of carbon dioxide pollution and atmospheric degradation. In the 1970s, NASA’s space shuttle program piqued the interest of atmospheric chemists like Ralph Cicerone and Richard Stolarski, who then attempted some of the first investigations into stratospheric rocket exhaust. The shuttle’s solid engines used a crystalline compound called ammonium perchlorate, which releases hydrochloric acid as a byproduct. Chlorine is highly destructive to ozone—the Environmental Protection Agency estimates a lone atom can break down tens of thousands of molecules of the atmospheric gas.

In a June 1973 report to NASA, Cicerone, Stolarski, and their colleagues calculated that 100 shuttle launches a year would produce “quite small” amounts of chlorine-containing compounds. But they warned that these chemicals could build up over time. Cicerone and Stolarski ultimately focused their attention on volcanic eruptions, because those belches represented larger and more dramatic releases of chlorine.

In the 1980s, British meteorologists revealed that the ozone layer in the Antarctic stratosphere was thinning. They identified the culprit as chlorine from aerosol spray cans and to O3-munching chemicals called chlorofluorocarbons from other human-made sources. That hole began to heal only after the 1987 Montreal Protocol, the first international agreement ever ratified by every member state of the United Nations. It phased out the use of CFCs, setting the atmosphere on a decades-long path to recovery.

In the wake of that treaty, “Anything that emitted chlorine was under suspicion,” Ross says. But it remained unclear whether rocket emissions too could alter the ozone layer.

For the following two decades, the US Air Force enlisted the Aerospace Corporation and atmospheric scientists like Darin Toohey, now a University of Colorado Boulder professor, to study the chemical composition of rocket exhaust. Using NASA’s WB-57 aircraft, a jet bomber able to fly 11 miles high and retrofitted for scientific observations, teams directly sampled emissions from American launch vehicles including Titan, Athena, and Delta into the early 2000s.

Freshly collected material from the plumes gave the researchers a firmer grasp on the ways solid propellant interacted with air. For instance, they examined the particles that were expelled when shuttle boosters burned aluminum powder as fuel—and how those bits reacted to ozone. The effect wasn’t as severe as they had feared, Ross says. Though the plumes depleted nearby ozone within the first hour after a launch, the layer was quickly restored after the emissions diffused.

Meanwhile, at the turn of the 21st century, blastoffs were decreasing in the US and Russia. After the space shuttle Columbia disintegrated on reentry in 2003, killing its seven-person crew, NASA suspended other flights in the program for two years. Missions using the WB-57 aircraft to observe exhaust came to an end in 2005. Six years later, NASA officially retired the shuttle system.

When SpaceX sent its first liquid-fueled rocket into orbit in 2008, it set the stage for more privately developed spaceflights. But the chemical it pumped into its marquee machines wasn’t anything new. A refined version of kerosene, Rocket Propellant-1 or RP-1, has powered generations of rockets, including the first-stage engines of the spaceships that ferried Apollo astronauts to the moon. It was well known and relatively cheap.

Sensing an aerospace trend, Ross, Toohey, and their colleague Michael Mills calculated what emissions would be produced by a fleet of similarly hydrocarbon-powered rockets anywhere between the Earth’s surface and 90 miles aloft. Their predictions, which they published in 2010 in the journal Geophysical Research Letters, turned up something unexpected: an emissions signature full of black carbon, the same contaminant belched by poorly tuned diesel engines on the ground. “It seemed to have a disproportionate impact on the upper atmosphere,” Toohey says.

Those dark particles are “very, very good at absorbing the sun’s radiation,” adds Eloise Marais, an atmospheric chemist at University College London. Think of how you heat up faster on a hot summer day while wearing a black shirt rather than a white one, and you get the idea.

Near the ground, rain or other precipitation will flush dark carbon out of the air. But in the stratosphere, above rain clouds, soot sticks around. “As soon as we start to put things in that layer of the atmosphere, their impact is much greater, because it’s considerably cleaner up there than it is down here,” Marais says. In other words, the pristineness of the stratosphere makes it more vulnerable to the sun’s searing rays.

Black carbon particles can persist for about two years in the stratosphere before gravity drags them back down to the ground. They also heat up as they wait: In a study published this June in the journal Earth’s Future, Marais and her colleagues calculated that soot from rockets is about 500 times more efficient at warming the air than that from planes or emitters on the surface.

Another recent model run by Ross and Christopher Maloney, a research scientist at the National Oceanic and Atmospheric Administration Chemical Sciences Laboratory, came to a similar conclusion about the dark stuff’s impact on climate change. Should space traffic increase tenfold within the next two decades, the stratosphere will warm by about 3 degrees Fahrenheit, they predict.

That uptick is enough that “stratospheric dynamics [will] begin to shift,” Maloney says. Currents carry naturally produced ozone from hotter tropical regions toward cooler poles. If rockets scorch a pool of air above the Northern Hemisphere, where most launches take place, that warm-to-cold path could be disturbed—disrupting the circulation that ferries fresh O3 northward. The upshot: a thinner ozone layer at the higher latitudes and a toastier stratosphere overall.

Sizing up old launches can help clear up some of the gray areas in this process. In a paper published this July in the journal Physics of Fluids, a pair of researchers at the University of Nicosia in Cyprus simulated the plume from a SpaceX Falcon 9 rocket from 2016. According to their model, in the first 2.75 minutes of flight, the craft generated 116 tons of carbon dioxide, which is equivalent to a year’s worth of emissions from about 70 cars.

Toohey sees these projections as validation of the black carbon concerns he raised more than a decade ago—but thinks they’re not as compelling as direct observations would be. There has been “basically no progress, except additional model studies, telling us the original hypothesis was correct,” he says. What’s needed, he adds, is detection in the style of the earlier WB-57 missions. For example, spectrometers planted on the sides of spaceships could measure black carbon.

Policy is another limiting factor. The International Air Transport Association, an influential trade organization, has set carbon-neutral goals for airlines for 2050, but there is no comparable target for space—in part because there is no equivalent leader in the industry or regulatory body like the Federal Aviation Administration. “We don’t have an agreed-upon way to measure what rocket engines are doing to the environment,” Ross says.

While there are newer fuels out there, there’s no good way to determine how green they are. Even the one that burns cleanest, hydrogen, requires extra energy to be refined to its pure molecular form from methane or water. “The picture is very complex, as all propellants have environmental impact,” says Stephen Heister, who studies aerospace propulsion at Purdue University.

Atmospheric scientists say solutions to preserve the stratosphere must be developed collaboratively, as with the unified front that made the Montreal Protocol a juggernaut. “The way to deal with it is to start getting people with common interests together,” Toohey says, to find a sustainable path to space before lasting damage is done.