The new Rival blasters use physics to give skilled shooters an unexpected advantage. 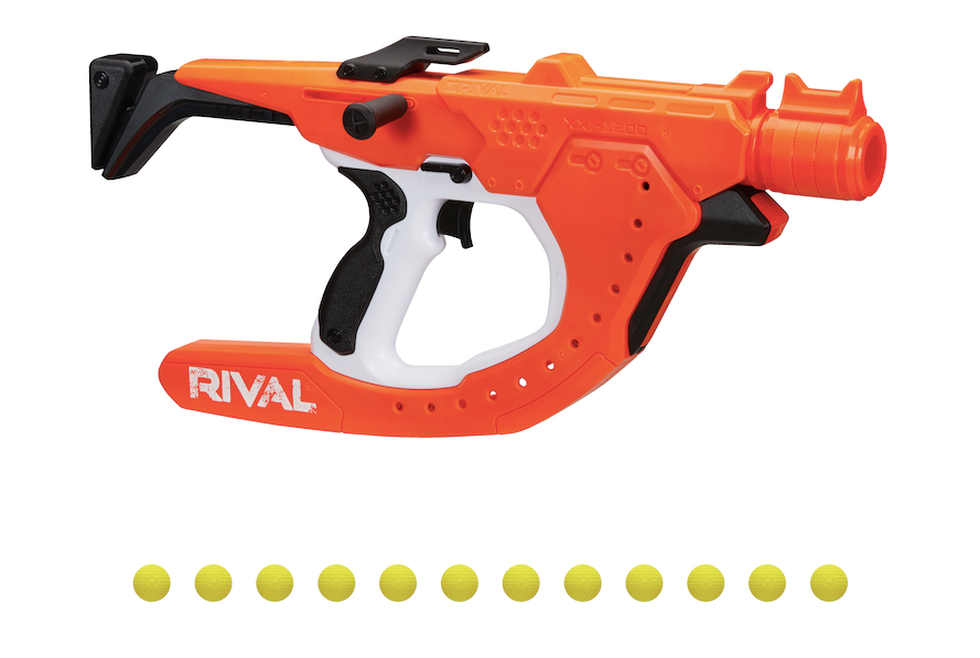 Rotating the front part of the barrel allows players to change the trajectory of the shots. Hasbro
SHARE

Curved shots with a Nerf blaster are nothing new. If you’ve ever tried to shoot a dart after your dog—or maybe a sibling—gnawed on it, you know those lumps and bumps give the foam ammo a wild and unpredictable trajectory. Now, however, Nerf is intentionally allowing players to curve their shots with its new line of Rival blasters.

Nerf unveiled the Rival lineup back in 2015 when it introduced its new form of ammo. Instead of foam darts, the Rival blasters shoot small foam balls with golf-ball style dimples on the outer surface. Air flowing over those dimples can have a pronounced effect on the trajectory of a ball as it flies through the air.

As the ball travels out of the barrel of a Rival blaster, a small ridge (called a “bucking” in Airsoft guns, where this has been common practice for a long time) on the top of the barrel causes the ammo to spin backwards. The resulting lift effect—called hop-up—will cause the round to stay in the air longer than it would without spin while traveling the same speed.

Now, Nerf has released three new Rival blasters, the $15 XXI-100, the $25 Sideswipe XXI-1200, and the $30 Helix SSI-2000, which can hold up to 20 rounds at a time. All of them allow players to rotate the barrel and adjust the position of that ridge. As a result, the shot’s trajectory will bend to the side or even down towards the floor if you want to rain little foam balls on your opponents from above.

Nerf enthusiasts have known about this phenomenon since the beginning, and some companies even sell custom pieces with more pronounced buckings to augment the backspin effect and send the spheres flying even longer distances.

If you’re expecting the Rival rounds to take sharp turns or let you fire around 90-degree corners, you’ll likely find yourself disappointed. The curve will be relatively gentle, at least over short distances. Because the foam balls are so light, they’re also extremely susceptible to wind interference, so trajectories get even more unpredictable once you’re outside.

The concept of hop-up has played a central role in Airsoft, a paintball-style game played with solid pellets. The backspin helps the light ammo stay airborne for longer without requiring extra oomph behind each shot. Even some paintball manufacturers have tried to implement this concept in their markers. Obviously, paintballs would break if they hit a ridge in the barrel, so manufacturers attempted to cut vents in the top of the barrels to let air escape. The idea was to increase air pressure behind the bottom of the ball in order to create an unbalanced force that would promote backspin. It never really caught on in a big way, though, in part because some players found that the paintballs slowed down more during the course of their flight, which prevented them from breaking on impact.

Backspin also plays a crucial role in how a golf ball flies through the air. Golf companies use spin to manipulate how a ball flies through the air with every club. Drivers, for instance, aim for relatively low rpms to prevent shots from spinning too much and going high into the air before falling gently back to the earth. This is called ballooning and it’s bad for hitting long shots.

While the Rivals ammo won’t be traveling nearly as fast as a golf ball off of a driver, those little yellow projectiles can reach speeds in excess of 60 mph with some blasters. Because each shot should have basically the same amount of force behind it, a little practice should allow committed Nerf warriors to dial in surprisingly predictable results when it comes to shooting curved shots at unexpecting siblings or roommates who foolishly let their guard down while trying to watch Netflix.