The Paleozoic-era fossil gives off a certain Cthulhu vibe. 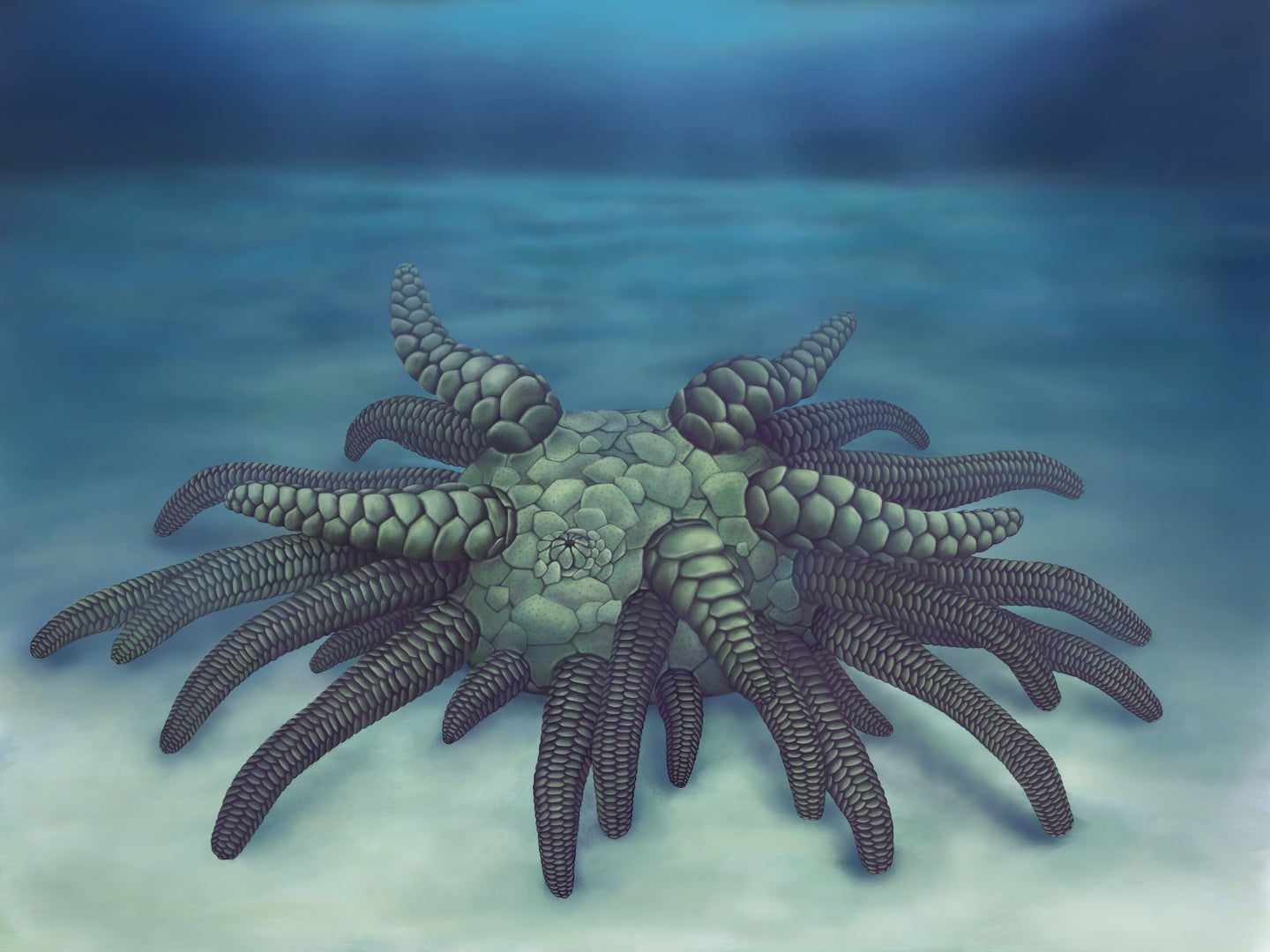 Scientists just named a new fossil after the mythical sea-dwelling monster from H.P. Lovecraft ‘s sci-fi horror story, The Call of Cthulhu. And, well—yeah, we totally see it.

Researchers at Yale, Oxford, the University of Leicester, Imperial College London, and University College London combined hundreds of images to reconstruct an image of the 430-million-year-old fossil’s soft tissue. The new species of echinoderm––the taxa which includes sea urchins, sea cucumbers, and sea stars––reveals clues about how the modern day sea cucumber evolved.

Sollasina cthulhu roamed the Paleozoic-era seafloor, using its 45 tubular tentacles to travel and collect food. Scientists discovered its fossil in the Herefordshire Lagerstätte, a rock formation on the Wales-England border known for its abundance of exquisitely-preserved sea invertebrates. The location was crucial to their success. More than 400 million years ago, the rock lay at the bottom of a moderately deep sea that was haven for echinoderms. Scientists believe volcanic ash rapidly covered the seafloor, burying animals like Sollasina cthulhu alive and uniquely preserving their soft tissue. This kind of snapshot is a rare commodity among fossilized life, and it reveals important details of how different species’ bodies morphed over time.

“It’s a fantastic opportunity,” says lead researcher Imran Rahman, deputy head of research at the Oxford University Museum of Natural History. “Soft tissues aren’t often preserved and they don’t look the same as we see in living species, so it’s difficult to work out what they are.” The nuanced traits uniquely preserved in Herefordshire Lagerstätte fossils allow scientists to create digital representations of long-gone species. To create a 3D model of this tentacled creature––which was just over an inch in diameter––the team combined computer reconstruction and an imaging technique commonly used in medical research. To start, they split the ancient, egg-shaped volcanic ash casing to reveal Sollasina cthulhu‘s impressively-preserved fossil. That was the easy part.

To reconstruct the creature’s soft tissue, researchers captured hundreds of images of its imprint. The team sanded away minute layers of the fossil, roughly one-three-hundredth of a millimeter at a time, revealing in incredible detail the size and shape of its internal features. The images captured at each phase represent slices of the specimen, and this painstaking process is the only way to study the inner features of the fossil that are imbedded in rock. The team examined the pictures for clues as to what the species looked like when it was alive. From these, they made a list of its distinct features and compared them to traits found in other fossils and living ancestors in the same genus. Rahman says the task was tedious, but without it, they wouldn’t have been able to add this important piece to the evolutionary puzzle. “That sum of evidence is how we’re able to interpret these soft parts.”

Piecing together how echinozoa like sea cucumbers came to look as they do today is difficult, as entire branches of the evolutionary tree are missing, mostly because fossilized soft tissue is so rare. Thanks to Sollasina cthulhu, scientists now know that the sea cucumber likely had an endoskeleton made of plates that it lost over hundreds of millions of years, and that its scrawny tentacles were once long. But this wasn’t what they were expecting to find. Sollasina cthulhu looks like it would be more closely related to the spiky sea urchin than its tubular cousin. The creature’s vascular system revealed the truth. The animal’s ringlike structure helped it breathe, eat, and move, just like akin framework does for modern sea cucumbers and sea urchins. By comparing the size of the rings to sea invertebrate traits from across the phylogenetic tree, scientists were able to determine the new species’ rightful place on the evolutionary timeline––a distant relative of the modern day sea cucumber.

The animal kingdom’s evolutionary timeline is riddled with holes. Mapping new species like Sollasina cthulhu helps us fill the gaps and better understand how today’s ecosystems came to be.