Tracking the Cambrian Explosion, when the oceans first filled with complex animal life. 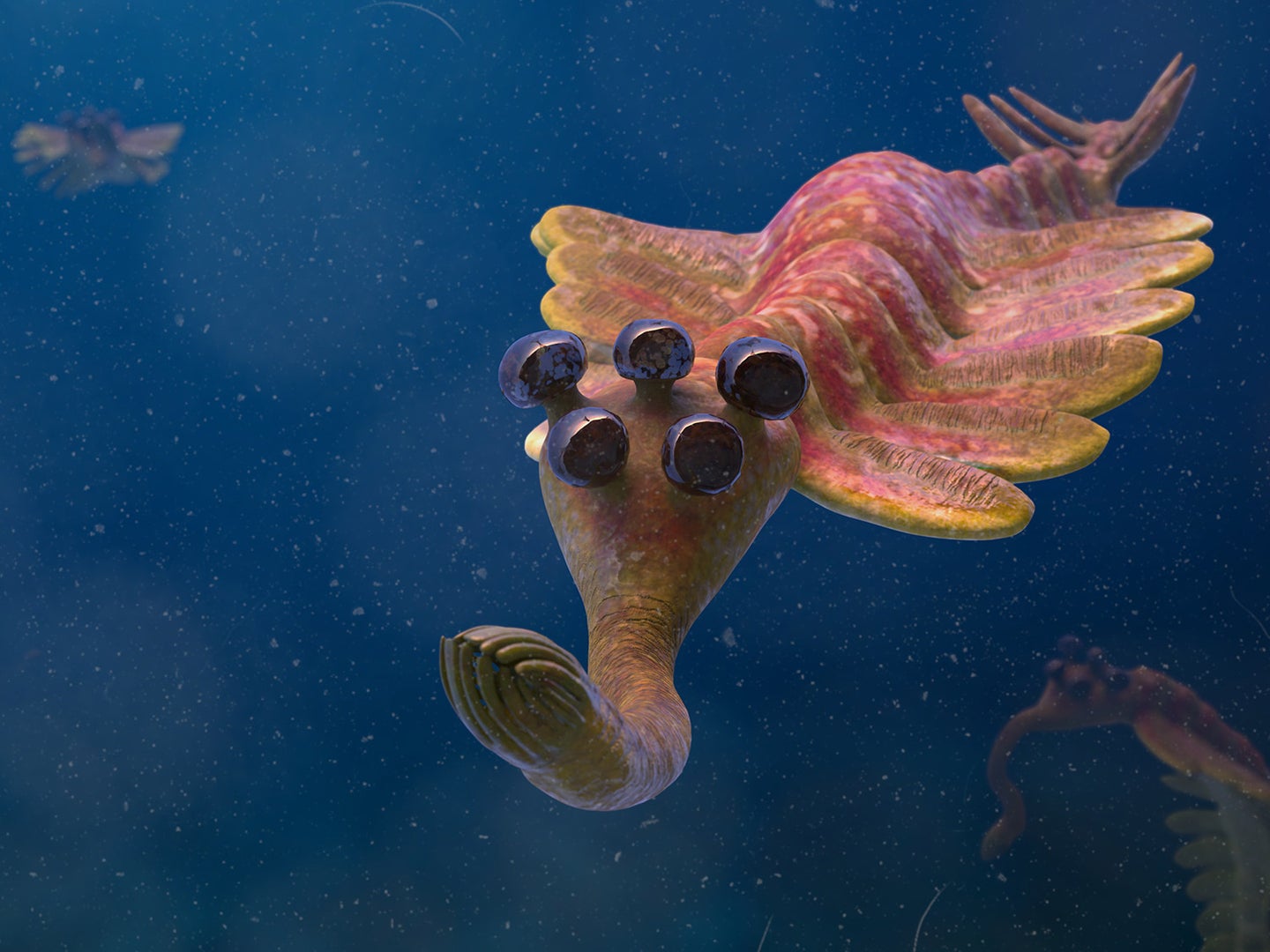 The most recent 12 percent of time on Earth is a striking anomaly when compared with the great bulk of our planet’s evolution. After 3 billion years or more of Earth as a microbial world, cells found ways to grow and assemble in their millions to build eyes, guts, muscles, nerve systems with brains, skeletons, and the rest of the complex structures that form the mobile, sentient, marvelously various animals that fill our now-familiar world.

The speed of this transition, seen by geologists in the sudden appearance of complex fossils such as trilobites in layers of rock, seemed so shockingly abrupt that it amazed and worried even Charles Darwin. As this flowering of complex multicellular life is used to mark the beginning of the Cambrian Period of Earth time, 541 million years ago, it has long been called the “Cambrian explosion.”

We now know it was not quite so abrupt. The evolution actually took place in distinct stages over more than 30 million years—the pioneering geologist Preston Cloud called it “the Cambrian eruption.”

The period has, somewhat mysteriously, left behind more than its fair share of amazing fossil localities called “Lagerstätten,” where not only hard skeletons but soft and delicate tissues are preserved, to give a much clearer window on the totality of life than the usual fragments of shell and bone. The classic in this respect was long the Burgess Shale, high up on Mount Stephen in British Columbia, Canada, and mined for its wondrous fossils for more than a century. In the past three decades it has been joined by China’s Chengjiang deposits.

Together these have given a detailed picture from near the dawn of animal life in the marine realm (the land, then, was still largely barren): a wealth of arthropods, worms, lamp shells, sponges, chordates, and even some animals that still defy biological assignment.

Now another Cambrian Lagerstätte has turned up—and the first results, just published in Science, suggest that it may rival those of the Burgess Shale and Chengjiang. It is also in China, in Qingjiang in Hubei province, and is about the same age as the Chengjiang, some 518 million years old, and so in the early part of the Cambrian Period. Indeed, it formed on the same general stretch of continental shelf sea as the Chengjiang fossils, about 621 miles away, and seemingly in somewhat deeper waters. What is surprising is that not only are the fossils just as exquisite, but they represent quite different animal communities. The Cambrian seas were clearly more diverse than thought, even in those early days.

Although the Qingjiang fossils do include many worms, arthropod, and sponges, they also are prolific in animals possessing the most delicate and translucent of tissues, such as jellyfish, here preserved with mouths and tentacles, and their distant relatives “comb jellies.” These are rare in the Burgess Shale and Chengjiang deposits, but among the Qingjiang fossils there are many astounding examples, flattened on the shale surfaces and preserving fine details of these softest of anatomies.

The comb jellies may be the earliest form of animal–a title that they currently contest with the sponges. Both these kinds of animal are preserved here, in numbers and fidelity that may help resolve the dispute.

Other strange and wonderful animals appear in the Qingjiang strata, and represent curious and perhaps profound trends in evolution. There are kinorhynchs, for example – these are the “mud dragons,” animals that are today obscure because they are part of the “meiofauna,” those tiny creatures that live between grains of sediment on the sea floor.

Here, three new fossil forms have been found, some up to 1.5 inches long, rather than the contemporary sub-millimeter size. These Cambrian giants suggest that some of today’s meiofauna started off “normally” sized, and then became miniaturized–for good.

It is a true cornucopia. How did it form? The same kind of quick-fire preservation process is mooted as for the Burgess Shale and the Chengjiang fossils: the animals were caught up in mud slurries, and carried down to deep, oxygen-starved parts of the sea floor to be rapidly buried in the stifling mud. It makes sense—but then such conditions and processes persisted long after the Cambrian, and yet were rarely associated with such bonanza fossil finds. There is much that remains mysterious about the dawn of life as we know it—but the Qingjiang fossils, as we study them more, will slowly shed light on these enigmas.