Tomatoes, tempura, and other foods whose origins will surprise you

Some ingredients have traveled far to become part of a national cuisine. 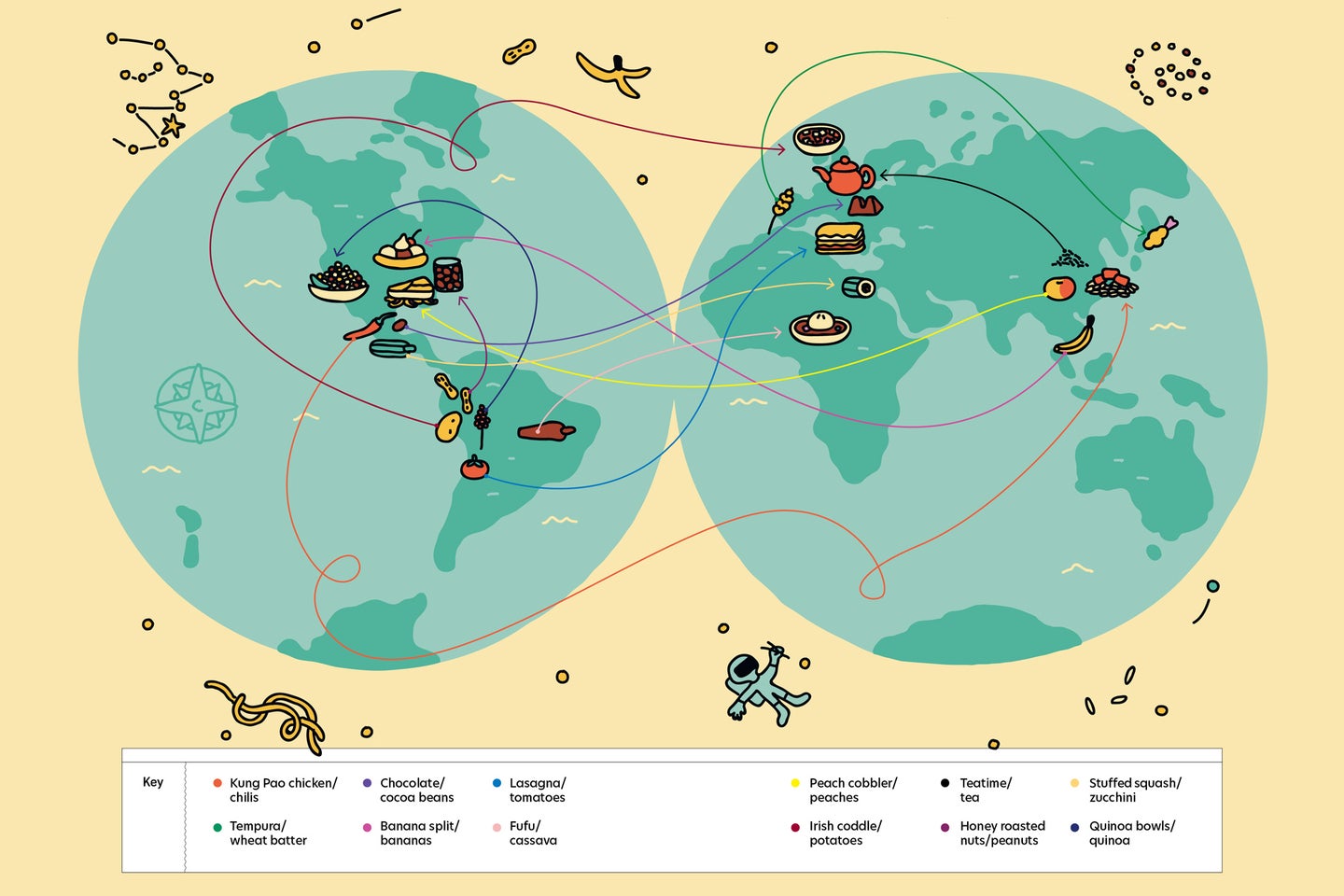 Peach cobbler and ballpark peanuts have something in common: They’re classic American dishes built on decidedly un-American crops. The state fruit of Georgia originated in China, while peanuts (just like “Irish” potatoes) hail from South America. These aren’t gastronomical exceptions either. From the heyday of the Silk Road to the Columbian Exchange, globalization has been bringing humans—and their stomachs—closer together for thousands of years. Here we trace some iconic foods back to their foreign homelands.

Tien tsin, or Chinese red pepper, is named for the port city of Tianjin. But chilis don’t originate in the People’s Republic. Though they’re a key ingredient in many classic dishes, such as the Sichuan staple known as Kung Pao chicken, the spicy plant is native to Mexico. Columbus introduced it to Europeans during the Columbian exchange, who traded it east throughout the 16th century.

Tempura is a cornerstone of Japanese cuisine; chefs batter and deep-fry everything from shrimp to shiitake mushrooms. But the practice originated with the Portuguese, who ate battered green beans called peixinhos da horta—“little fish of the garden”—on holy days when Catholics abstained from meat. Traders brought their method to Japan in the 1540s, and they left their recipes behind.

The cocoa bean emerged in Mesoamerica, where indigenous people used it in religious ceremonies, traded it as a currency, and fermented it into alcohol. Europeans didn’t like the bitter taste, so they mixed cocoa with sugar, honey, and vanilla (another New World contribution). In the early 1800s, Swiss chocolatiers made it smoother and mixed in condensed milk, creating their singularly creamy chocolate.

Latrobe, Pennsylvania, and Wilmington, Ohio, both claim to have invented the banana split by 1907. But the key ingredient comes thanks to the domestication of seedy, starchy plantains some 7,000 years ago in Southeast Asia. Americans didn’t enjoy the fruits of those labors until the Centennial Exposition in 1876, where vendors sold bananas peeled and wrapped in foil for a dime.

Italians have been making lasagna since ancient Rome—only without the tomatoes. The bulbous fruit, which originated in the Andes, first appeared in Italian records in 1548 as an ornamental plant. It wasn’t until 1692 that cookbooks featured it as an edible ingredient. By the 19th century, the tomato—cheap, growable year-round, and tasty—was central to the newly unified country’s cuisine.

Cassava root provides food for 500 million Africans. In countries like Ghana, a doughy mush of cassava (or plantains or yams) called fufu goes with most meals. But the woody shrub originated on the other side of the Atlantic. Portuguese sailors and slave traders introduced the crop to Africa in the 16th century, where its ability to survive intense rains and drought made it an indispensable food source.