It's not cute, but it does tell us a lot about primate cognition. 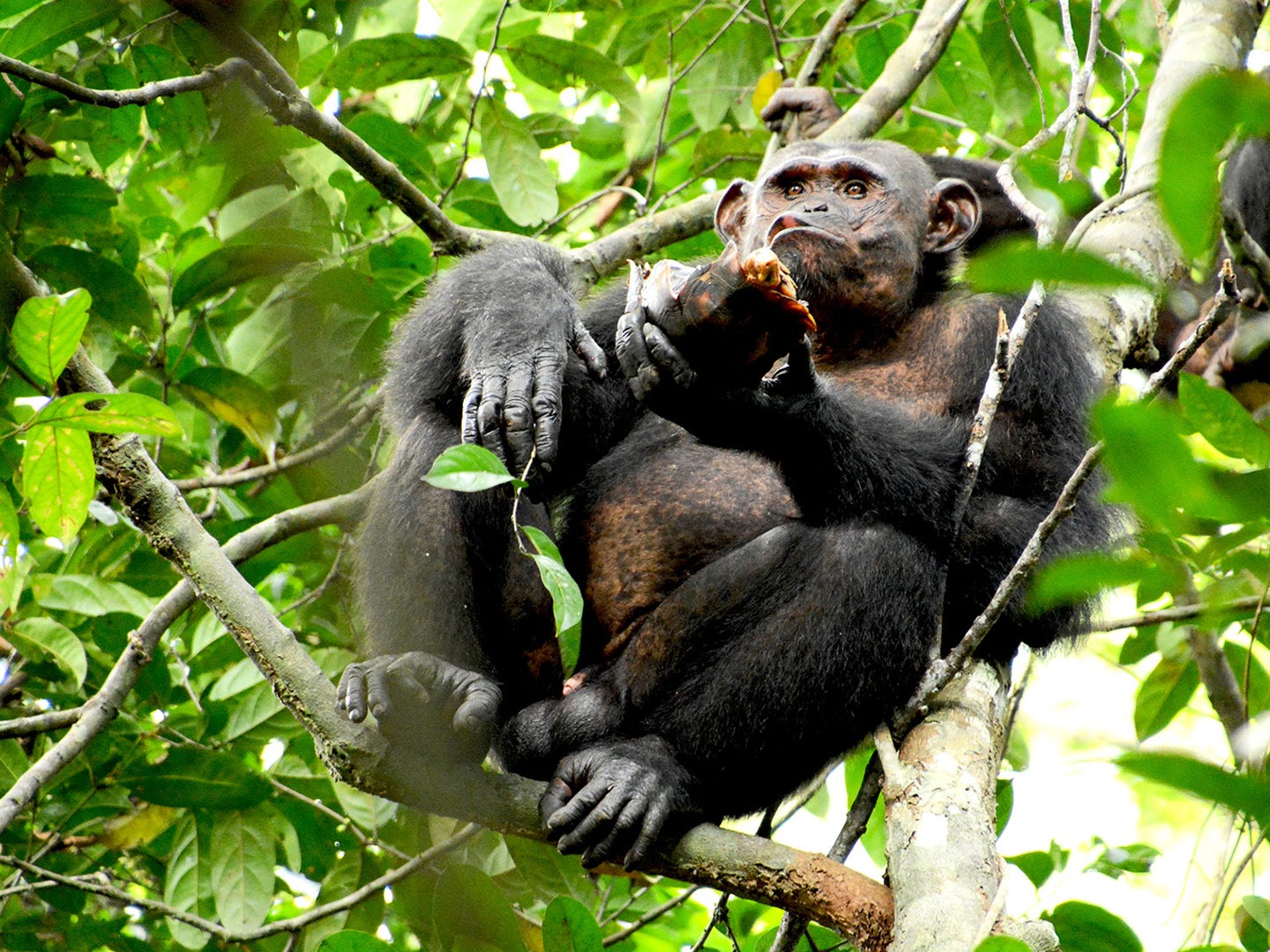 All chimpanzees eat animals at least sometimes, including anything from ants and termites to bushpigs and even baboons. Monkeys, in fact, are typically the most frequent item on the menu, and in some cases chimpanzees can eat so many monkeys they threaten to wipe out entire populations. One group in Senegal even hunts tiny, mouse-like primates known as bushbabies by using spear-like tools to first probe the holes the bushbabies hide in during the day, before reaching in to grab their prey.

So chimpanzees are rightly known as resourceful eaters. But until now scientists had never observed them eating reptiles.

That has all changed, thanks to a group of wild chimpanzees in Loango National Park along the Atlantic coast of Gabon in Central Africa. These chimps have recently become used to the presence of humans, which means scientists can now see them act exactly as they would in nature. And, writing in the journal Scientific Reports, a group of researchers say they have already observed behavior not previously seen in chimpanzees.

These chimpanzees regularly catch, kill, and consume tortoises that have been grabbed from the forest floor. For people like us, who also research chimpanzee behavior, the discovery is particularly exciting because the animals obtain the tortoise meat by pounding the shell repeatedly onto a tree trunk until it cracks.

This sort of “percussive foraging”—the pounding of certain food items until a breaking point—has been seen in chimpanzees elsewhere, but never to obtain meat. For instance chimps in Senegal have been observed pounding baobab shells to extract the softer fruit-covered seeds inside. From Sierra Leone to the Ivory Coast, Western chimpanzees use stone and wooden hammers to crack open encased nuts from protective outer shells.

Broadly, this sort of pounding has been suggested as the first step towards more complex tool use that allowed early human ancestors to flourish. The question of why other chimpanzee communities do not do this too, despite the clear benefits of obtaining otherwise protected nuts, seeds, and now meat, remains unanswered.

This newly discovered percussive behavior in chimpanzees leaves a significant damage pattern on the tortoise shell and potentially damages the anvil on which it was cracked. The evidence left behind is therefore of interest to us primate archaeologists who use archaeological techniques to understand the physical remains of non-human primates. Our work in this emerging discipline relies on material artifacts—shattered tortoise shells, for instance—to reconstruct contemporary primate behavior in the same way we do for early hominins.

We have long assumed that reconstructing hominin meat-eating behavior was dependent on our finding fossilized stone tools and cut marks left on processed animal bones. To this select list we can now add tortoise shell. Previously, scientists had looked at fractured turtle remains and argued the animals may have been an important part of early human diets, but the Loango chimpanzees provide us a glimpse of the role this meat may have played for our early ancestors.

The new findings also reveal something even more remarkable. Among their observations, the researchers describe another novel behavior: the storage of one of the tortoise shells in the fork of a tree that is later retrieved and consumed by the same male chimpanzee.

Such “future-oriented cognition” has long been considered uniquely human, but experimental evidence suggests other species, including apes and some birds, may possess it as well. If chimpanzees can indeed anticipate a future state (I will be hungry) as being different than their current one (I am not hungry), then a more nuanced interpretation of their cognition is required. Indeed, a careful study of the species may uncover many more examples of this future planning.

It is now clear that with every new wild chimpanzee community that becomes used to humans, scientists observe new and unexpected behavior—some of which challenges our understanding of evolution and what it means to be human. Furthermore, the difference in behavior from group to group highlights the extraordinary cultural diversity among our closest living relatives.

The opportunity for comparisons with our own evolution has become a run against time as the human infestation of the planet threatens wild primate populations worldwide. We know that the presence of humans directly destroys not only the habitat and lives of primates but also leads to the loss of behavioral diversity. Conserving the last remaining populations of wild apes has become urgent, otherwise our fellow primates will disappear forever. With their extinction will disappear a part of their own heritage and a window back to our own evolution.