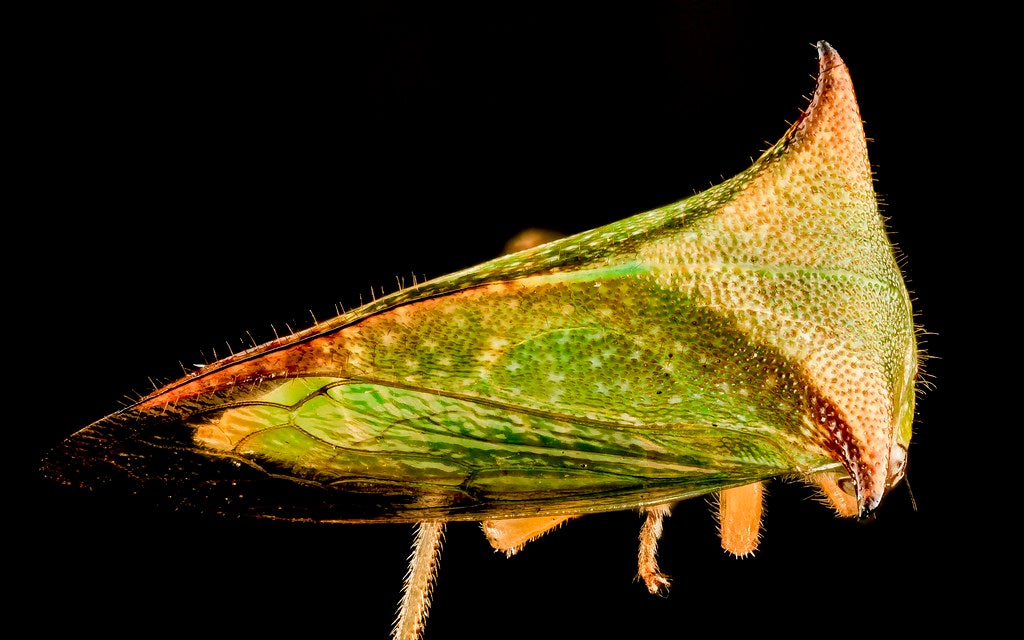 Treehoppers (Membracidae) are, in most respects, nothing special. Abundant everywhere but Antarctica, there are about 3,200 species of this cicada (Cicadoidea) and leafhopper (Cicadellidae) relative. Each individual measures between two and twenty millimeters. They live for a few months, during which they feed on sap. They have some social characteristics but no extraordinary capacities distinguishing them from other social insects.

What separates treehoppers is their headgear. Each species has its own model of enlarged and ornate helmet, known to entomologists as a pronotum. Some look like spines, others like leaves or ants. Still others have forms too bizarre for the Oxford English Dictionary to name. Even the hats at a royal wedding would fall short of these helmets’ extravagance. And, unlike all those princesses and duchesses, treehoppers have to wear their millinery 24/7, from birth until death.

The treehoppers’ helmet is hard to justify from a selectionist standpoint. Schlepping it around adds a considerable energy burden, so it ought to do something important. What might be its useful function? Courtship, the usual suspect when it comes to exaggerated features, is eliminated by the absence of sexual dimorphism. Helmets are equally distributed in both genders; one can distinguish males and females only by their genitalia. Aerodynamics, another possible function, defies common sense. While some helmets are streamlined, others are decidedly not. And, in any case, the extra weight is detrimental to flying. Camouflage is a stronger bet but also problematic. Even in cases where the helmet’s form or colors fit the environment, a helmetless insect with the same colors and an otherwise identical form would be better equipped for hiding, being half the size or smaller. In the absence of smaller mimics, it is reasonable to infer that the helmet is not an antipredator tool.

So, what is the helmet for? Benjamin Prud’homme and Nicolas Gompel offer an answer based on their careful study of the treehoppers: nothing. Based on the discovery that the helmet is a third pair of wings that lost their original function, they turn to Darwin’s thesis on vestigial organs. The helmets “illustrate how a structure or an organ, relieved from its original function, is ‘left to the free play of the various laws of growth’ . . . and provides a new substrate for morphological diversification.” But contrary to typical vestigial organs such as the human appendix, the python’s pelvis, and the whale’s leg bone, which degenerate over time, the treehoppers’ helmets continue to evolve to an ex- travagant scale. Some measure twice or thrice the size of the rest of the body to which they are attached. The treehoppers illustrate Romanes’s observation that specific traits that differentiate species from one another may be useful to scientists but are useless to the species themselves.

The miserly accountant appears to have fallen asleep on duty some 3,200 times. We cannot credit this outcome to nature’s bias toward excess. That bias applies only to traits that are important to species, not to vestigial organs; where preservation has no effect on survival, there is no need for factors of safety and therefore no increased probability of runaway growth. Vestigial organs should shrivel, not expand. Yet in the long term, and for reasons unfathomable, the bigger and freakier prevailed. The results are artistic masterpieces, but from a selectionist point of view, they are pure heresy. More than three thousand white elephants? That is a lot of exceptions.

The big question surrounding the helmets is one we have encountered before. How can such excess be viable? How is it that this useless, overweight blob meets the eighteenth-century French anatomist Marie François Xavier Bichat’s definition of life: “the set of functions which resist death”? We need not doubt the treehoppers’ will to live. As Baruch Spinoza put it, “Each thing, as far as it can by its own power, strives to persevere in its being.” Another way to think about this is to recognize that organisms resist change, death being the ultimate case. Change is met with negative feedback, which brings a system back to equilibrium, as opposed to positive feedback, which distances the system from the original equilibrium.

There are three mechanisms that, in concert, can explain how this perseverance works in living organisms: facilitated variation, homeostasis, and norm of reaction. Facilitated variation affirms 3 billion years of natural selection followed by 400 million years of risks, follies, and otherwise idiosyncratic development; homeostasis preserves the interior milieu of the organism against external and internal perturbations; and the norm of reaction means that every genotype can produce a range of phenotypes without new genetic variation. Collectively, these mechanisms form a natural safety net that allows the mediocre to survive and thrive.4 This theory takes for granted the distinction between the two evolutions. During the first, occurring over the course of those 3 billion years of life on earth, adaptation amid competition produced fundamental changes in the nature of life. During the second, the safety net is so robust that all species are good enough to survive and experiment with selectively neutral variations in size, shape, and other aspects of appearance.

I should stress that this safety-net theory is just that—a theory. I cannot prove that it explains our observations of nature, but I believe it provides a useful complement to prevailing wisdom, filling in its gaps.

As should be clear, natural selection has a critical role in this theory: it is the engineer behind the safety net. But this role lasted “just” three billion years. Since the Middle Cambrian period, positive selection has been reduced to the role of architect and designer, whereas natural elimination (natural tolerance) pre- dominates. CCCP and homeostasis were fixed and optimized through a selective process, after which species were free to play with appearance and scale. The extraordinary diversity of body forms found in the Burgess Shale—fossils dating back 508 million years—demonstrates the power of the fixed infrastructure. The safety net was so strong that the genetic lottery could produce all sorts of sustainable deviation. The treehoppers’ helmets prove that deviations must be extreme before, as our epigraph puts it, “the sentence of unfitness is pronounced and the penalty of extermination paid.” The safety net is nature’s assurance to the fittest and the mediocre alike. Excellence does not hurt, nor is it necessary.

Even the mediocre may be good enough. Nature’s safety net benefits humans, of course. But there is something special about us, for we have won the final arbitrament of life. We must have an edge over everybody else. If my argument holds, this edge was not selected. Our victory was won by an organ that imposes huge selective burdens, and in any case, no one wins where competition is endless.

Excerpt adapted from GOOD ENOUGH: THE TOLERANCE FOR MEDIOCRITY IN NATURE AND SOCIETY by Daniel S. Milo, published by Harvard University Press. Copyright © 2019 by the President and Fellows of Harvard College. Used by permission. All rights reserved.