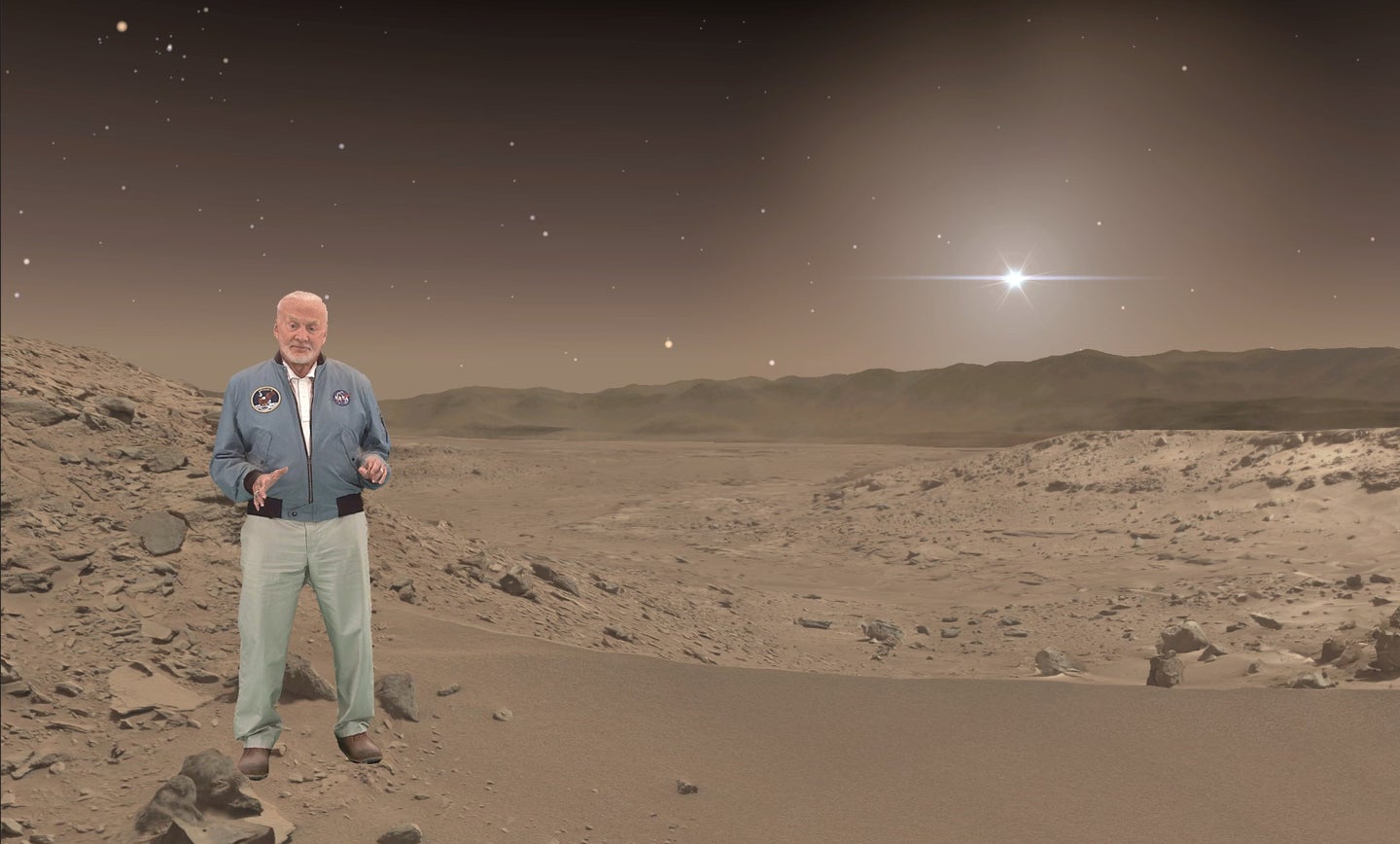 At its most optimistic, the earliest NASA can hope to put people on Mars is sometime in the 2030s. But we’re impatient, and want more Mars. NOW.

In order to bridge the decade-plus gap between the present and Mars (and probably to drum up public support for crewed Mars missions), NASA is unveiling Destination: Mars, a virtual reality-heavy exhibit opening this summer at NASA’s Kennedy Space Center Visitor Complex.

At the exhibit, a visitor will wear Microsoft’s augmented reality headset, the Hololens, to ‘visit’ Mars. Once inside the virtual world, visitors will be treated to a guided tour of the surface, with guides Erisa Hines, who drives the Mars Curiosity Rover, and astronaut Buzz Aldrin. NASA describes the exhibit as ‘mixed reality’ so there will be some physical elements stirred in to the virtual experience.

Hines and other NASA scientists have gotten to use this kind of technology already. NASA scientists like Abigail Fraeman, another Curiosity researcher, use a program called OnSight that takes images collected by the rover and creates a virtual reality version of Mars to explore.

“OnSight makes the whole process of analyzing the data feel a lot more natural to me,” Fraeman said. “It really gives me the sense that I’m in the field when I put it on. Thinking about Martian geology is a lot more intuitive when I can stand in the scene and walk around the way I would if I were in the field.”

The Microsoft Hololens is also being used for other NASA purposes, which recently sent the devices up to the International Space Station. Astronauts are using the devices to test augmented reality instruction manuals, which could be handy on an actual journey to Mars. The astronauts are also using the Hololens for other super serious pursuits, like playing Space Invaders:

Yes, your 10-year-old self knew it. Being an astronaut is clearly the best job ever.

If traveling to Florida is still just an unbearable hurdle for a virtual reality trip to the red planet, there are other options.

NASA is working on a free virtual reality program called The Mars 2030 Experience which will be available on Oculus Rift, Google Cardboard, and Samsung VR Gear sometime this fall.

Mars is closer than you’d think.