Don't expect to breathe this O2—instead, it could help launch future rockets off Mars. 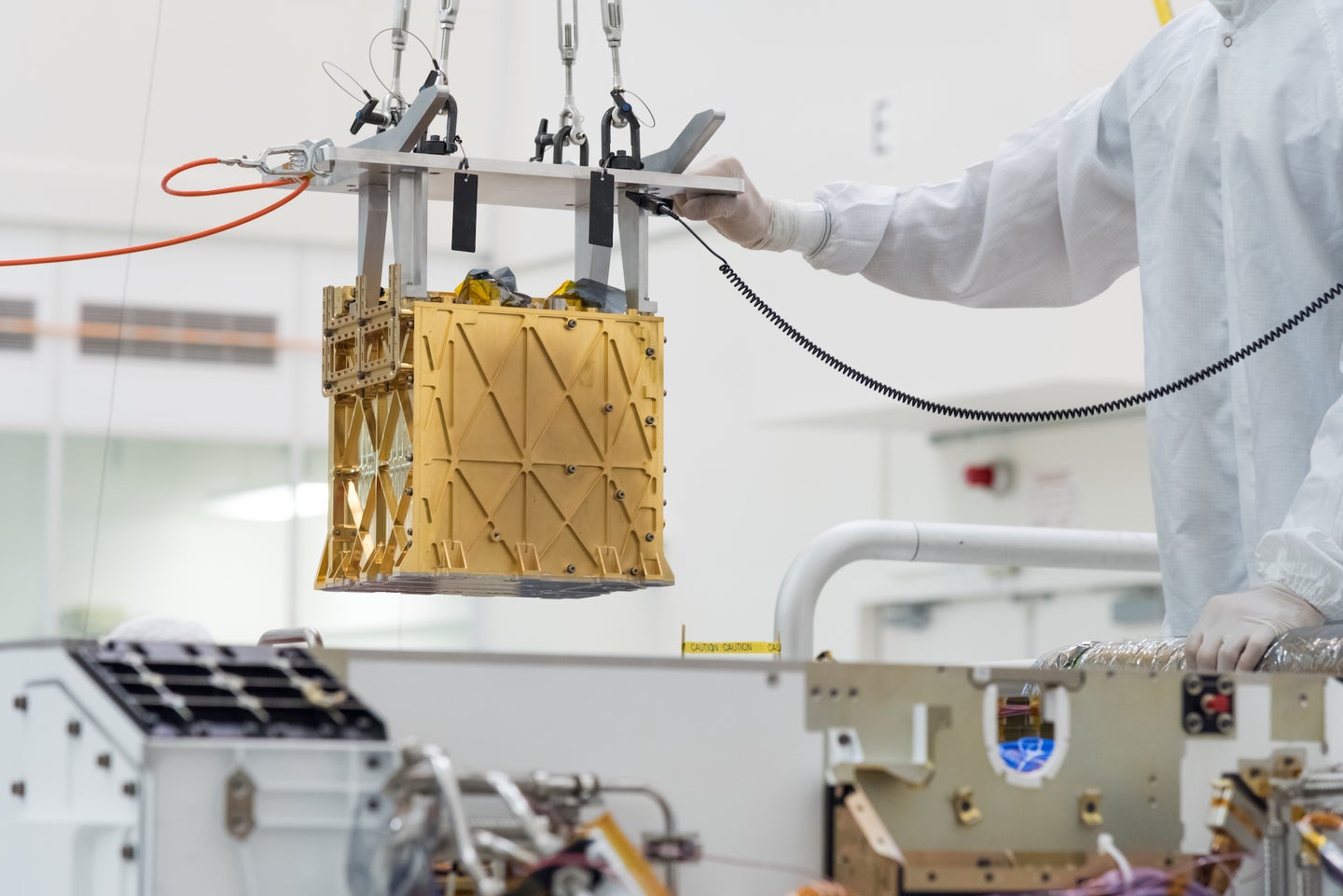 The MOXIE instrument is lowered into the Perseverance rover in 2019. NASA/JPL-Caltech
SHARE

A trip to Mars will be difficult, to say the least. Although human spaceflight has become a regular occurrence in near-Earth space in recent decades, leaving our gravitational pull takes a lot of rocket power. And then leaving a planet like Mars to return to Earth will also take a lot of oomph.

But NASA, other spaceflight agencies, and private companies have set their sights on putting humans on Mars—and returning them to Earth safely. So engineers and scientists are working to figure out how to make enough propellant to make such a trip possible.

Oxygen, an essential component of rocket propulsion, is hard to come by on the Red Planet. But results from a prototype machine on Mars suggest the element can be yanked out of the air—hinting at future productions to power rocket launches, but not yet nearly enough for humans to breathe Martian air directly.

“It’s really difficult, if not impossible, to design a human Mars mission that doesn’t use in situ resources,” says Carol Stoker, a planetary scientist at NASA Ames Research Center who was not involved in the project, using the scientific term for “on site.”

Now, a lunch-box-sized device piggybacking on the Perseverance rover has opened the door to producing propellant from resources found on Mars. The Mars Oxygen In Situ Resource Utilization Experiment (MOXIE), has successfully produced oxygen on the Red Planet.

From the time that Perseverance landed in February 2021 to the end of that year, MOXIE produced about 50 grams of oxygen over seven runs, according to a report published Wednesday in the journal Science Advances. MOXIE has continued to run experiments under various conditions into 2022, says MOXIE deputy principal investigator Jeffrey Hoffman, a professor of aeronautics and astronautics at the Massachusetts Institute of Technology.

The device can produce 6 to 10 grams per hour, depending on atmospheric conditions. It set that production maximum rate at the end of August, Hoffman says, when the Martian atmosphere was densest.

The purpose of MOXIE, Hoffman says, “is to verify that the process actually works on Mars. And that, I would say, we are well on the road to doing.”

MOXIE uses the molecules that make up Mars’s atmosphere to create oxygen. But it’s not a simple extraction. The Martian atmosphere is 95 percent carbon dioxide (Earth’s atmosphere is mostly nitrogen with a large portion of oxygen as well). MOXIE has to split the CO2 molecules into carbon monoxide and oxygen.

First, MOXIE draws in air through a HEPA filter, which keeps Martian dust out of the process. Then the Martian air goes through a compressor because, as Hoffman explains, it is not dense enough for the oxygen-producing process. The device compresses the Martian air, significantly increasing its density: from 100 times thinner than Earth’s atmosphere to about half as thin.

Then, the carbon dioxide is heated up to about 1,500° F (800°C). Once heated, it’s time for the main event: A run through the electrolysis unit, which uses electricity to drive a chemical reaction. In there, the carbon dioxide encounters catalysts, like nickel, which cause the CO2 molecule to dissociate into carbon monoxide (CO) and an oxygen ion. Then electricity is used to pull oxygen ions through a filter into another chamber, where they combine into oxygen molecules. The result is pure oxygen that can be used for breathing or for rockets.

“The nice thing about MOXIE is that, from the oxygen side of it, all you need is the atmosphere,” Hoffman says. “So it doesn’t matter where you are, you can go anywhere you want, and you’ve got atmosphere.”

[Related: This miniature rocket could be the first NASA craft launched from Mars]

MOXIE has produced oxygen throughout Mars’s nights, during the day, and in multiple seasons–even the winter. During the coldest months on Mars’s poles, the atmosphere’s density reduces because carbon dioxide deposits onto the polar surface as ice. That means there’s less CO2 available for MOXIE every six months, explains Margaret Landis, a research scientist in the Laboratory for Atmospheric and Space Physics at the University of Colorado Boulder. Still, it produced about 6 grams per hour during those times that the atmosphere thinned.

“MOXIE can run any time on Mars,” Hoffman says. “If we get some more runs, we’re going to try running it at dawn and dusk when the conditions are changing rapidly, and we can show that MOXIE can adapt to those changing conditions.”

A rate of 6 to 10 grams an hour, however, will not produce nearly enough oxygen to be useful for a human mission to Mars. The average human breathes a little less than 1 kilogram of oxygen each day, Hoffman says, and rockets are even hungrier for O2. It will take tens or even hundreds of tons of oxygen to power a rocket that can launch people off the surface of Mars. But that oxygen can be accumulated over time. A full-scale version of a MOXIE-like system would need to produce something like 2 to 3 kilograms an hour of oxygen, Hoffman says, to have any chance of amassing enough liquid oxygen to use in the rocket launch system.

Engineers already have a prototype of such a larger device, he says. Because MOXIE had to hitchhike on the Perseverance rover, it was kept small, but a future mission could send a larger MOXIE-like device to Mars on its own. Hoffman says that such a device might also have more features, like perhaps the ability to make the carbon monoxide product into something useful as well.

The ability to produce oxygen doesn’t mean that Mars-launching rockets are ready to go. Oxygen is only one part of the rocket-launch equation, says NASA’s Stoker. It provides half of a combustion reaction–the oxidizer–but a rocket still needs other ingredients for fuel. But, she adds, oxygen could supply more than three-quarters of the mass needed to propel a rocket, and that greatly reduces the amount of stuff that has to be carried to the Red Planet from Earth.

As a MOXIE-like technology is scaled up, Landis says, it’s worth considering the environmental impact that this process might have on Mars. “It’s something to think about because CO2 is a major component of Mars’s atmosphere, and plays a really major role in its seasonal cycle,” she says. “There’s still a lot to learn about the exact implications of what’s going to happen if you start changing this equilibrium between surface and atmospheric CO2” and the types of gases.

“It sometimes does feel like you’re living in a science fiction future,” Landis says. “This is a testament to how much we’ve been able to do on Mars.”