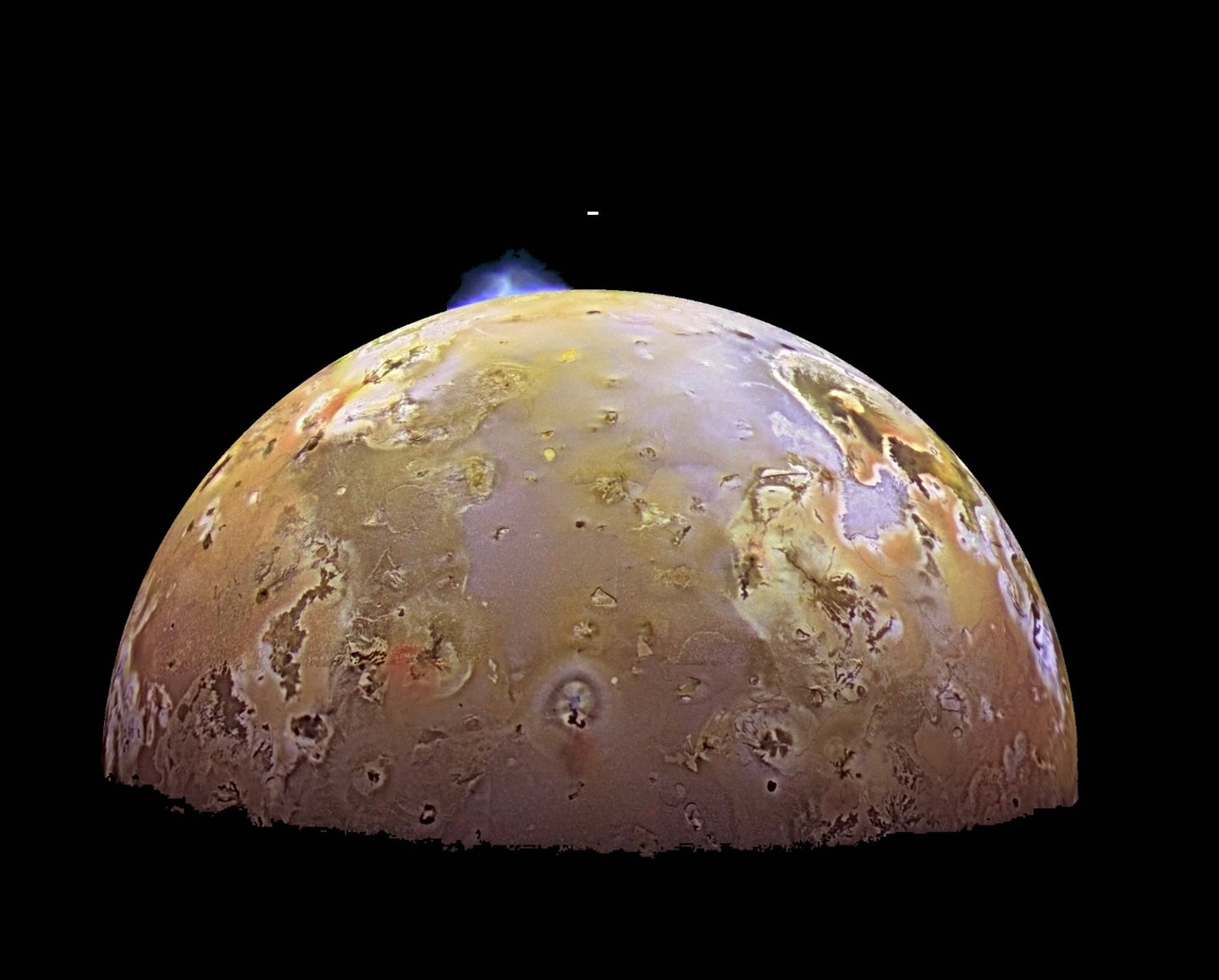 Eruptions are so frequent on Io that it has the most volcanic activity anywhere in the solar system. NASA/JPL/University of Arizona
SHARE

In our solar system, there are worlds of ice and worlds of fire. Jupiter’s moon Io is the best example of a world of fire, freckled with volcanoes and cracked by lava spills.

There are many competing theories to explain the workings of this fire-orb. New research published in The Planetary Science Journal and presented at the 2022 American Geophysical Union Fall Meeting narrows down what could be going on inside the volcanic world using computer simulations, suggesting that it hosts a scorching ocean of magma beneath its surface.

Magma oceans are thought to have been a common feature of rocky planets and moons earlier in the solar system, but are almost nonexistent now as things have cooled down over time. Io’s searing sea could be the only surviving example, giving scientists the opportunity to observe one up close.

“Whether a magma ocean exists or not essentially changes how Io operates, and it greatly affects the interpretations of various observations of Io,” says Caltech planetary scientist Yoshinori Miyazaki, lead author on the new research paper.

On Earth, volcanoes are caused by our planet’s shifting tectonic plates. Io’s volcanoes arise from a very different mechanism, called tidal heating. In tidal heating, a large object—in this case, Jupiter—squishes and stretches another object near it through gravity, heating it up with friction. It’s sort of like mushing around clay with your hands until the substance becomes flexible and warm. Thanks to this geological phenomenon, Io has enough warmth to sustain its many volcanoes.

“At Io, tidal heating has run wild, generating one of the most volcanically active worlds in our solar system, with over 100 active volcanoes at any given time,” says James Tuttle Keane, a planetary scientist at NASA’s Jet Propulsion Laboratory who is not affiliated with the research team. “Because tidal heating is so extreme at Io, it makes it the best natural laboratory to understand this process.”

There has been long-standing debate on what resides beneath Io. Before we even saw the surface of the hellish moon, scientists speculated there may be a magma ocean raging under the rocky crust due to Io’s wild tidal heating. However, once Voyager and Galileo revealed Io’s rugged terrain, astronomers began to doubt a subterranean magma ocean could support such heavy mountains.

Scientists then pivoted to suggest the interior is just rock with little melted bits inside. A recent hypothesis proposed the interior could be something in between pure magma and pure rock—a partially molten mass called a magmatic sponge. “Think of a magma sponge like a dish sponge or a coral sponge, where both the solids and the liquids are entirely interconnected,” explains Tuttle Keane. “This means fluids, be it soapy dishwater or magma, can flow through the sponge, but the sponge still has some structural integrity.”

[Related: We just got an up-close look at the largest lava lake in the solar system]

This new work, though, uses computer models to show the interior of Io is unlikely to be a magmatic sponge—and a magma ocean makes much more sense given the existing observations of the Galilean satellite.

Based on reasonable assumptions about the conditions inside Io, the computer simulations predicted that a magmatic sponge would quickly separate into different layers of magma and rock, creating the magma ocean. “Melt and rock tend to separate rapidly, just like the ice and water do in a slushie if you leave it for a while,” says University of California, Santa Cruz geologist Francis Nimmo, who wasn’t involved with this study.

Unfortunately, these models can’t definitively prove if Io does have a magma ocean. For that, we’ll need to send a probe back to the fiery little moon.

Miyazaki is looking forward to the Juno spacecraft’s upcoming flybys of Io in December 2023 and February 2024, where astronomers will measure a property of the moon called the Love number. This number is a proxy for how rigid or squishy the interior of a planetary body is. “If the Love number is large,” explains Miyazaki, “it will confirm the existence of a subsurface magma ocean on Io.”

Even if a magma ocean is confirmed, “there are still a lot of uncertainties associated with trying to understand Io’s interior structure,” Tuttle Keane says. “We need future missions to explore Io and the Jupiter system…many questions will remain unanswered until a dedicated Io mission is flown that can explore this volcanic moon in detail.”