NASA is launching a new quantum entanglement experiment in space

The researchers will test if their tech can produce and detect quantum entanglement on the International Space Station. 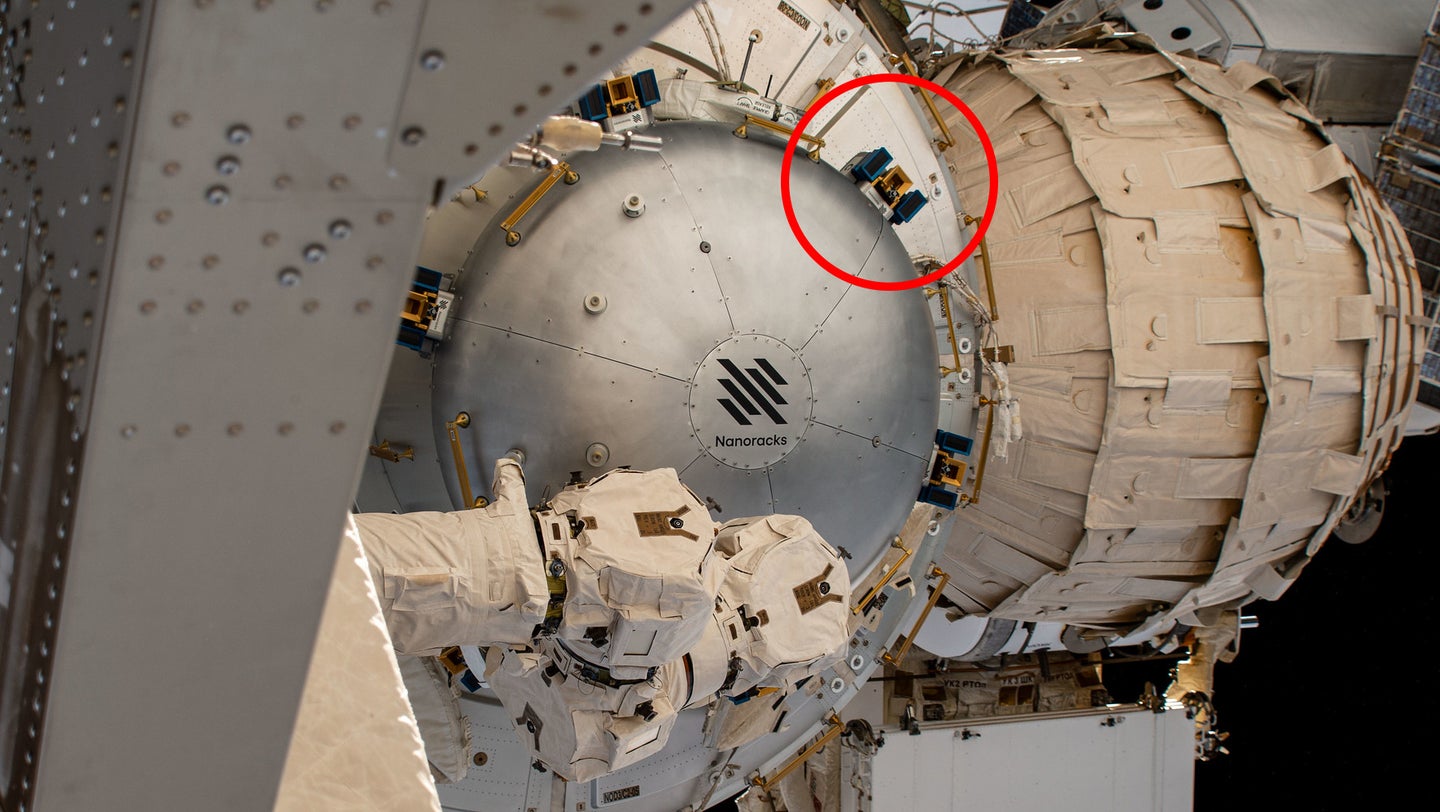 The quantum entangled system will be hosted on the outside of the ISS. NASA
SHARE

NASA announced this week that it is launching a mini experiment on quantum entanglement in space later this year. The mission, called the Space Entanglement and Annealing QUantum Experiment (or SEAQUE), is set to test if two entangled photons can remain linked with one another in space. This wacky property of quantum physics could one day connect devices like telescopes and computers together at frequencies that carry information with better resolution.

The project is a collaboration between research institutions in the US, Canada, and Singapore along with a few corporate partners. Everything needed for the system would fit inside a milk-carton-sized container on the surface of the International Space Station.

It’s a complex topic, so let’s start with the basics: A photon is a basic unit of light that can behave both like a particle and a wave. Meanwhile, entangled photons would behave like they’re connected, regardless of the physical distance between them (a phenomenon also known as “spooky action at a distance”). That means that even if each photon’s properties were measured independently, their results would still be correlated because measuring one photon out of the entangled pair would affect the properties of the other photon.

So what’s the point of this kind of research? Creating and maintaining this entanglement could allow distance-separated quantum systems on the ground, like quantum computers or quantum telescopes, to communicate high-resolution data with one another. A quantum network can be used for secure communications, for programming a quantum computer remotely, and for distributed sensing.

“Our project is a stepping stone for being able to connect up quantum computers,” says Paul Kwiat, the principal investigator on the SEAQUE project from the University of Illinois Urbana-Champaign. Linking up two quantum computers can also boost their computing capacity. Rather than having, for example, two 100-qubit computers acting independently, if these computers were entangled with each other, they would behave like one 200-qubit computer.

About those qubits: Unlike classical computers, which encode information in binary bits, quantum computers can code information in qubits, which can be 0, 1, or—bizarrely—both at the same time. This property, in theory, would allow quantum computers to solve certain problems like encryption, simulating a quantum system, or searching through an unsorted database, better than classical computers.

But quantum computers are delicate. If they are a hundred miles apart, but connected with optical fiber, it’s difficult to get the quantum signals to travel from one to the other because there’s loss as it goes through the fiber. “When you go a long enough distance, basically, your quantum signals don’t make it,” Kwiat says. And because quantum states can’t be copied, engineers can’t use amplifiers for the signals. “The advantage of trying to close the link from space is that the intensity of light basically falls off, and therefore the loss is much less going through free space than it would be trying to send a signal through fiber.”

Previously, entangled photons were created with a crystal the size of a binder clip. Then the photons had to be collected and realigned in space. SEAQUE is going to create entanglement through a process called spontaneous parametric down-conversion, in which a single photon goes through a non-linear crystal and produces two daughter photons that are lower energy. “One of the things we’re doing differently is our source is using a little integrated optic, a waveguide chip, so it’s much smaller,” Kwiat says. “We send in our light and then our photons come out of it and we just keep the temperature stable. Per parent photon you send in, you’re more likely to produce a pair of these magic entangled daughter photons than you would be in these bulk crystals.”

“We create them in some way so that they’re correlated in some of their properties. In our case, the photons are entangled in their polarization,” Kwiat adds. “Polarization is the wiggle direction, or the oscillation direction of the light.” An everyday example of a polarized system is 3D glasses for movies, where each lens sees light going in a different direction. “No matter how you look at [these daughter photons], there’s always correlations between them,” he says. “It’s impossible to get those correlations without a quantum system.”

In SEAQUE’s limited experiment, both photons will be created and detected in the same small package in space. For future quantum communication, they would need to add telescopes and some kind of pointing and tracking system, so that one, or both, of the photons can be transmitted, Kwiat notes.

With current technology, quantum memory cannot be stored long-term on something like a regular flash drive, so quantum information has to be sent over a link. A series of experiments out of China accomplished that through telescopes on the ground and a satellite in space.

“They have to be pointing and locked on to each other and send the quantum signals. The bigger the telescopes are, the more light you can collect with them, the higher the transmission efficiency you can get going from the ground to satellite or satellite to ground,” Kwiat explains. “The project we’re doing right now is not attempting to do that.”

After these two photons are created, the final step for SEAQUE is detection, which measures the properties of the photons. “The detector needs to be able to see single photons, and they’re extremely sensitive,” Kwiat says. There’s some loss of photons as a signal passes from Earth to space, but still, it would be a lot less loss than if it was going through fiber. “While detecting signals from Earth is beyond the scope of this technology demonstration, SEAQUE will use its detector array to count the photons generated by its entanglement source,” NASA said in its press release.

Because the photons are precious and limited, the researchers need to make sure that they can see the ones that they get, which means they have to cut out any noise that comes through the detectors.

“Typical detectors that people use are influenced by radiation damage. In outer space, you get a lot of radiation, and what that radiation does is it creates defects in the crystalline lattice of the detector material (a semiconductor or silicon),” says Kwiat. That causes noise, or dark counts, that makes the detector think it detected a photon even when no photon has passed through. These defects can accumulate over time, causing rising noise that could eventually drown out the quantum signal. If there’s too much noise quantum systems like quantum cryptography would become unsecured, and links between quantum computers would be severed.

On Earth, they seem to have found a fix for the problem. The defects from radiation are not stuck very rigidly in the lattice, and if you shake the lattice by heating it, those defects can fix themselves, Kwiat notes. But to make heating in space more cost efficient, instead of putting the entire detector in an oven-like structure, they’re going to use a bright laser to spot heal these defects. SEAQUE will test how effective this laser annealing method is in space, where there’s constant radiation damage. The laser healing will hopefully extend the mission lifetime so the whole system stays viable for longer.

It’s not yet certain how this long-distance communications will ultimately link up to an individual quantum computer. There are many different ideas about how entangled photons could be connected to quantum devices, mainly because there are lots of ideas about what a quantum computer should even look like.

However, some quantum technologies in development do interact with photons. For example, trapped ions, which are used in Honeywell’s experimental systems, emit a photon when they transition from one state to another.

“You can take one of the entangled photons and try to set it into the atom, or you can interfere those two photons in a way that transfers the entanglement so you can entangle these remote systems,” Kwiat suggests. Google and IBM, on the other hand, use superconducting quantum processors with qubits (a qubit looks like an artificial atom) that talk to microwave photons. “Now the question is can you convert that to one of the photons that we’re trying to send [to space].”

Microwave photons, because they have such low energy, would be almost impossible to detect in free space. “They would be swamped by all the noise,” he adds. “So you have to do some sort of transduction where you convert from microwave to visible wavelength or the telecommunication wavelengths.”

It’s a hard physics and engineering challenge that many groups across the world are working to solve at the moment. But maybe in the next decade or so, researchers might be able to take those photons, convert them into the right frequency that can talk to the quantum bit, whether that’s a trapped ion, a neutral atom, or a superconducting qubit.