This small-scale eruption happens on the surface of white dwarf stars. 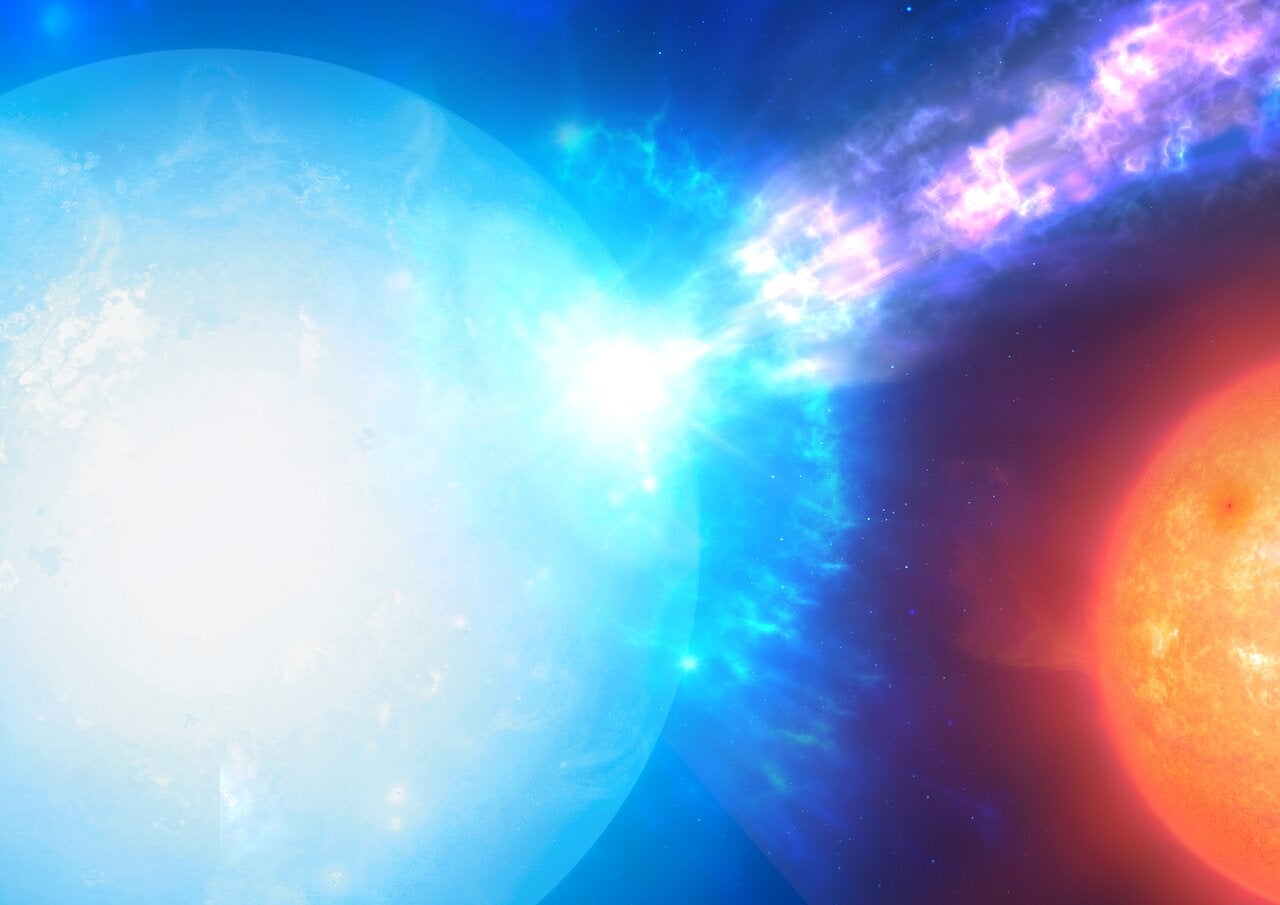 A micronova explosion at the pole of a white dwarf, which is stealing materials from its star companion, in an artist's illustration. Mark Garlick
SHARE

Astronomers have identified a new miniature type of star explosion, which occurs on isolated regions of certain star surfaces: They’ve named this nuclear eruption a “micronova.”

Only three micronovae have been observed so far—and all of them exploded on white dwarf stars, mysterious celestial bodies that don’t behave like other star types. The small, dense white dwarfs are made up of the leftover cores of dead stars. They are what’s left when stars like our sun use up their fuel and blow out most of their material. Thanks to their semi-morbid origin story, white dwarfs have earned the nickname “zombie stars.” Micronovae are the latest unusual feature of zombie stars, and the discovery was published in Nature on Wednesday.

A micronova, like a nova or supernova, is the result of nuclear fusion: when two hydrogen atoms combine to form helium while releasing a huge amount of energy in the process. But the whole process is smaller and faster—one micronova may last up to several hours, whereas a typical nova lasts for weeks at a time.

“It goes to show how dynamic the night sky is,” Simone Scaringi, an astronomer at Durham University in England and lead author of the study, told The Verge. “How things change really quickly if you’re not looking at the right spot at the right time.”

[Related: Hubble spies the most distant star ever found]

When Scaringi and his team first observed a micronova, they had no idea what they were looking at. They noticed that one white dwarf would burst into light for just 10 hours or so in sporadic moments. But the event was too dim and too short to be a usual nova. They observed similar phenomena on two other white dwarf stars.

These “micro-fusion bombs” have the strength of about one millionth of a nova explosion, hence the name “micronova,” Paul Groot, an astronomer at Radboud University in the Netherlands and a co-author of the new study, said in a statement. “For the first time, we have now seen that hydrogen fusion can also happen in a localized way,” he added.

Micronovae are likely possible due to white dwarfs’ intense magnetic fields. These small, dense stars probably pull hydrogen off of neighboring stars and funnel that material into their magnetic poles. Hydrogen builds up there until it reaches a threshold, triggering a small but hefty thermonuclear explosion.

This new discovery may change our understanding of how stellar eruptions occur, but extensive follow-up studies and large-scale surveys will be needed—there’s still so much unknown. The team hopes that follow up measurements will reveal more about the nature of these events, like their frequency, and the exact mechanism that triggers a micronova explosion.