The ancient animals have been thought to be exclusively land-lovers, until now. 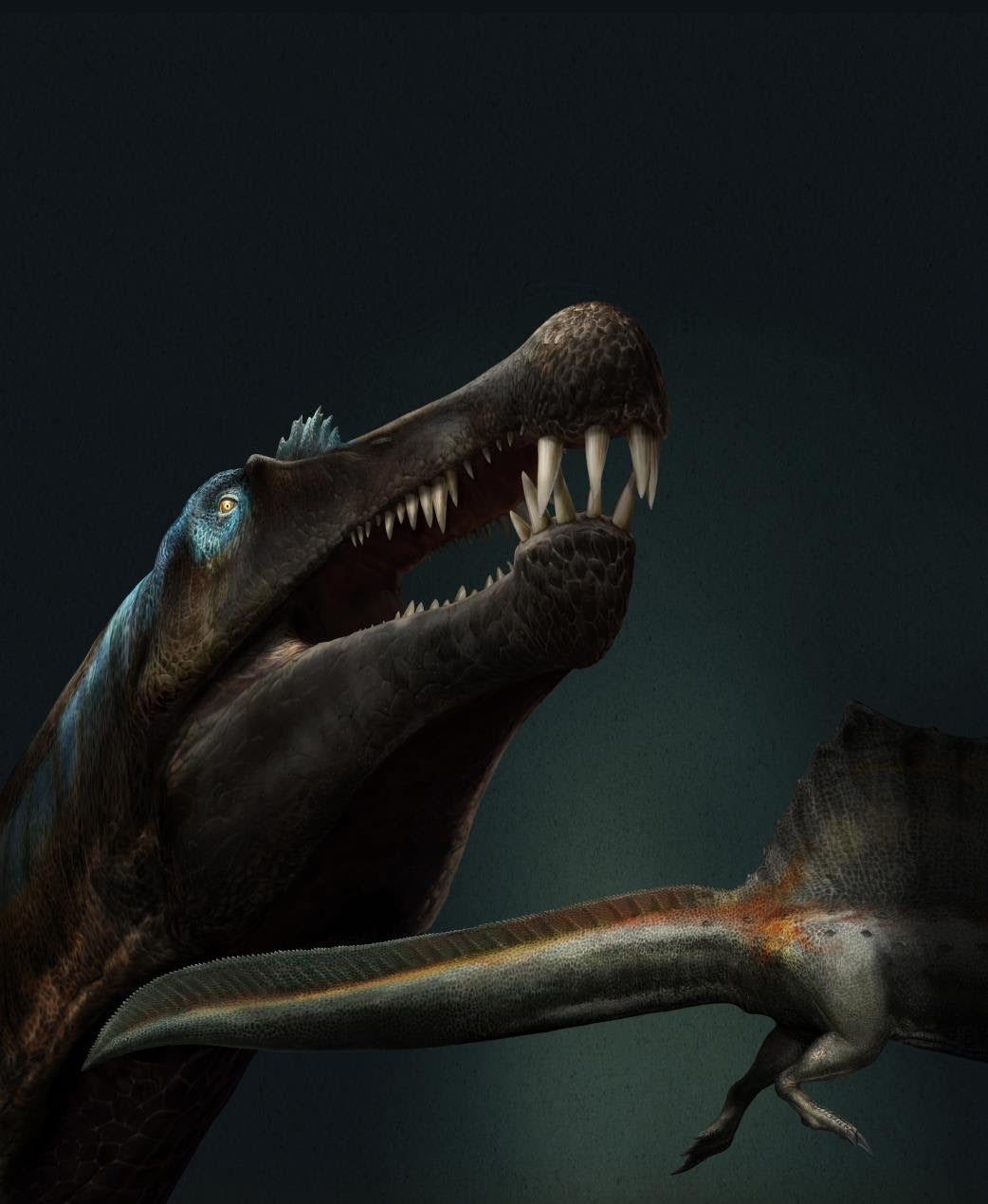 For millions of years, dinosaurs ruled the land and sky. For whatever reason, though, the ferocious beasts never took the deep dive into the open seas. Sure, some were believed to splash around or wade in prehistoric rivers, not unlike a lizard-like version of today’s grizzly bears. But a full-on marine dino? Until recently, that was the stuff of science fiction—and probably a fish’s worst nightmare.

Back in 2014, a team of scientists led by Nizar Ibrahim of the University of Detroit Mercy discovered a partial fossil of a massive spinosaurus in Morocco. This creature had short back legs, a crocodile-like snout, and pulled-back nostrils, not unlike animals we see with semi-aquatic lifestyles today. These were all hints that this particular dino might have found itself at ease wading into the water, but there wasn’t enough evidence to suggest the animal was a full-time swimmer.

What they really needed to find was the dinosaur’s “motor,” so to speak, which would show how it could navigate at ease for longer periods of time in water. Late last month, the same international crew of scientists published work in the journal Nature, describing the monstrous tail of the spinosaurus, which they believe is evidence to suggest that this guy was a Cretaceous sea monster.

“It’s like the dinosaur equivalent of Jaws,” Ibrahim says.

The scientists recreated a model of the massive tail, which makes the dinosaur itself about as big as a school bus. The enormous appendage acts as a side-to-side swinging paddle, which can propel the monstrous animal powerfully through the water, Cretaceous fish beware. With a motor like that, the spinosaurus was able to spend quite a bit of its time in the water, versus an occasional dip.

For the past several decades, scientists have primarily stuck to the idea that dinosaurs were terrestrial creatures. They could take over all sorts of environments on earth, and even take to the sky. Still, their one great weakness was their inability to “invade the watery world,” Ibrahim says.

Now that paleontologists have discovered that at least this one dinosaur likely lived a watery double life, Ibrahim believes there might be others out there that were more seafaring than we’ve previously given them credit for. Though, it doesn’t necessarily mean that a whole load of different species of dinos were secretly swimming around. Steve Brussate, a paleontologist at the University of Edinburgh, still thinks that the idea that most dinosaurs probably were more comfortable wandering around on dry land holds water.

“No doubt spinosaurus was an able swimmer in shallow waters, but its fossils are also found inland, so it probably was comfortable on land and in water,” he said. “We should be cautious about inferring too much beyond this one species, however.” The oceans were still dominated by other marine animals like sharks, rays, and aquatic reptiles like mosasaurs.

Matt Lamanna, a paleontologist at the Carnegie Museum of Natural History in Pittsburgh, says this new evidence provides a compelling case that the spinosaurus was probably far more aquatic than the rest of the dinosaurs we know about. However, it’s still a mystery how water-loving they actually were. Without a time machine or a real-life Jurassic Park, we’ll never know for sure how any dinosaur lived it’s life. But maybe, Lamanna argues, scientists have swung too hard in the direction of dinosaurs being exclusively land-lovers. If there are more aquatic species out there than we realize, “they’re probably sitting right under our noses.”

Whether or not dinosaurs ruled the seas like giant whales do today is still unknown. But this discovery does act as a reminder that there are still many secrets that can be uncovered in the dinosaur bones still buried beneath the earth, or even the ones on display in museums.

Soon, the dinosaur model will be on display in Bavaria, in the same museum where the first spinosaurus fossil was destroyed amid World War II. Until then, we can just keep hoping that Animal Crossing updates their spinosaurus fossil so we can gawk at its majestic paddle tail from home.