This Italian fishing town has one wriggly (and delicious) target

The local specialty is prepared fresh and simple. 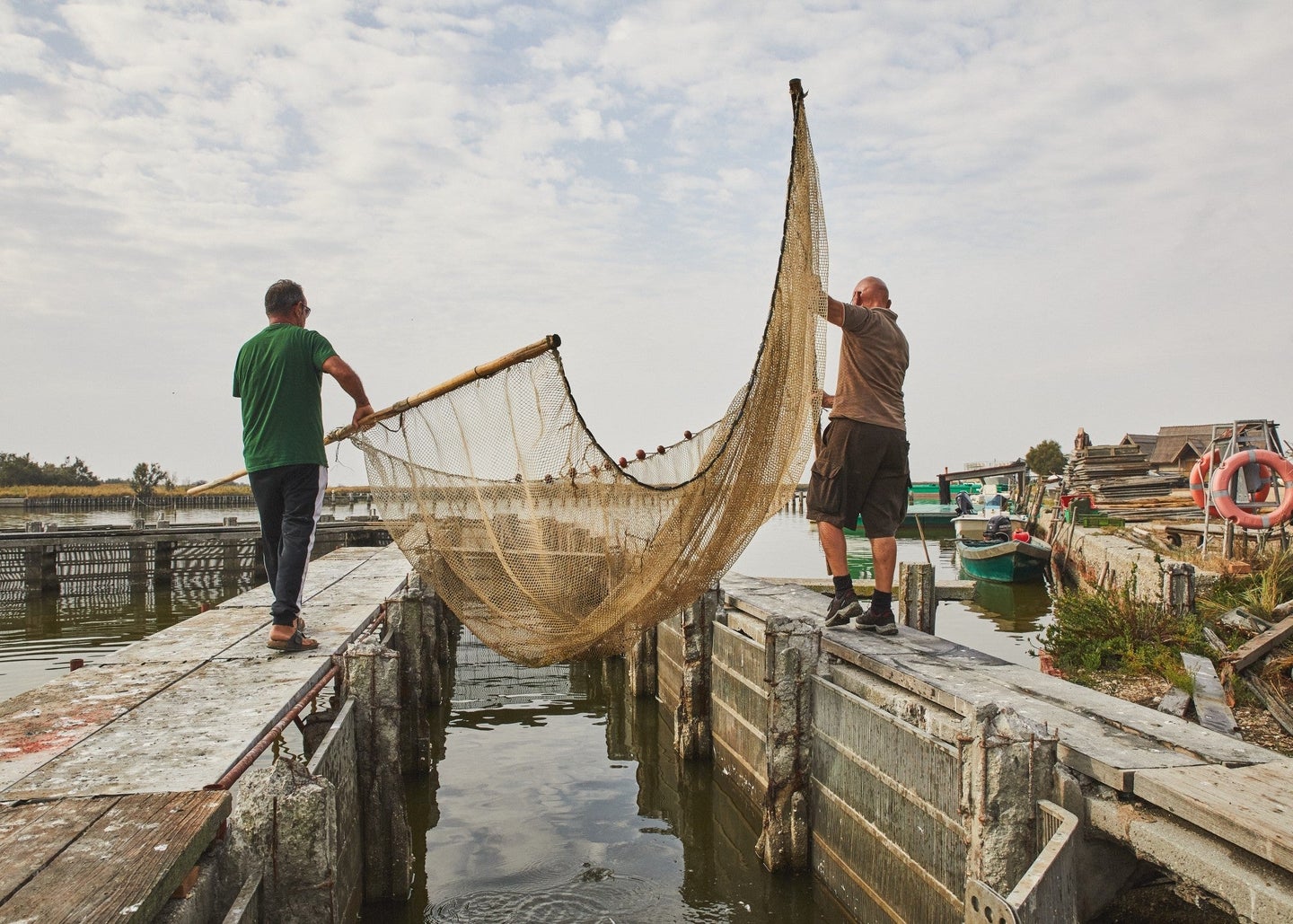 Local fishers Carletto and Giancarlo reset a net before pulling up eels from the trap. Simon Bajada/Saveur
SHARE

This story originally published on Saveur.

Up until the 1950s, there were no roads to Comacchio—the sleepy fishing outpost was only accessible by water—so it’s understandable that the Italian town and its people still have an air of superstition when it comes to outsiders. It hasn’t progressed like the more touristy destinations nearby dotting the Adriatic coast (Venice is a two-hour drive north), but travelers prepared to forego some modern luxuries will be rewarded with a trip back in time. That, and a taste of its most delicious export: eel.

Like the curious creature that put it on the map, Comacchio can be tricky to capture. Situated at a delta where several waterways meet the sea, the wetland-rich landscape is reminiscent of a scene out of True Detective—while the inner town could pass for Venice in miniature, with its picturesque network of canals and arched brick bridges.

The locale is perhaps best experienced in September and October, which marks the beginning of eel season, when the doors of the Manufactura de los Marinati (preserving factory) are flung open and visitors can feast on Comacchio’s local “gold.” Sophia Loren famously danced around the space in the 1954 film La Donna del Fiume (“The River Girl”) as hundreds of eels roasted on spits in the background—and the cinematic setting just adds to the impressive meal on offer.

First, an antipasti of fried then pickled anchovy, sardines, and smelt rolls out, followed by penne in a rich mantis shrimp and tomato sauce. Next, fried school prawns and whitebait act as show openers to the star dish: grilled eel on humble polenta. None of this fritto misto gets a drop of lemon juice (my request for the citrus was denied); the flavor is so superior, locals consider it somewhat of an insult to attempt to embellish it further.

In Comacchio, eels once translated into big business, and excessive stock prompted the development of preservation methods (still used today) to maximize profits. Roasted then cooled, the pieces are placed in a simple brine of vinegar, water, and bay, before being sealed in cans with the original 1950s packaging worthy of design awards. Nowadays eels rule the town for tourism rather than large-scale manufacturing. During the Sagra dell’Anguilla (the annual Eel Festival that kicks off in late September), stalls pop up along the canals selling local delicacies and every restaurant has a special set menu.

At Il Bettolino Di Foce, a destination eatery that stands at the end of a dusty car park under a vast open sky, I meet chefs Mirella and Fillipo. The flat surroundings, a stretch of ramshackle fishing huts and old stone factories where fishermen once lived for weeks at a time, add to the ambience and reflect the locals’ straight-forward approach to preparing their treasured ingredient. “The rich meat needs nothing,” says Fillipo. Oily eel skin develops a beautiful crust when grilled, while the flesh underneath remains moist. Served with polenta, a counterpoint to the fatty protein, and it’s immediately obvious why the combination has never changed.

Another perfect pairing? Wine vinegar. Used to preserve the eel, it’s also featured in the Bec d’Asan—a stew of tomato, onions, garlic, and eel that translates to “donkey’s beak,” an Italian expression for a simple, fast process with great results. Mirella, who has cooked up and down the Adriatic Riviera since the 1980s, holds back on the vinegar when making the dish, but Fillipo, going off the techniques and recipes passed down from his grandmother (herself a locally renowned home cook), insists the stew gets generous splashes of the stuff. And when we start eating it’s clearly warranted; the vinegar permeates the oily flesh and balances out the flavor.

Like most things in Comacchio, residents don’t feel the need to add flourishes or tweak traditional recipes. The original is a classic for a reason. “Cooking here is habitual, nothing inventive, we don’t change anything,” Mirella confirms. That’s reason enough for a visit—just remember to ask for lemon at your own risk!

Head over to Saveur for the best Italian-style eel recipes.