Only 10 percent of the world’s grasslands are intact

We don't give much love to prairies, but in some places they're disappearing faster than the Amazon. 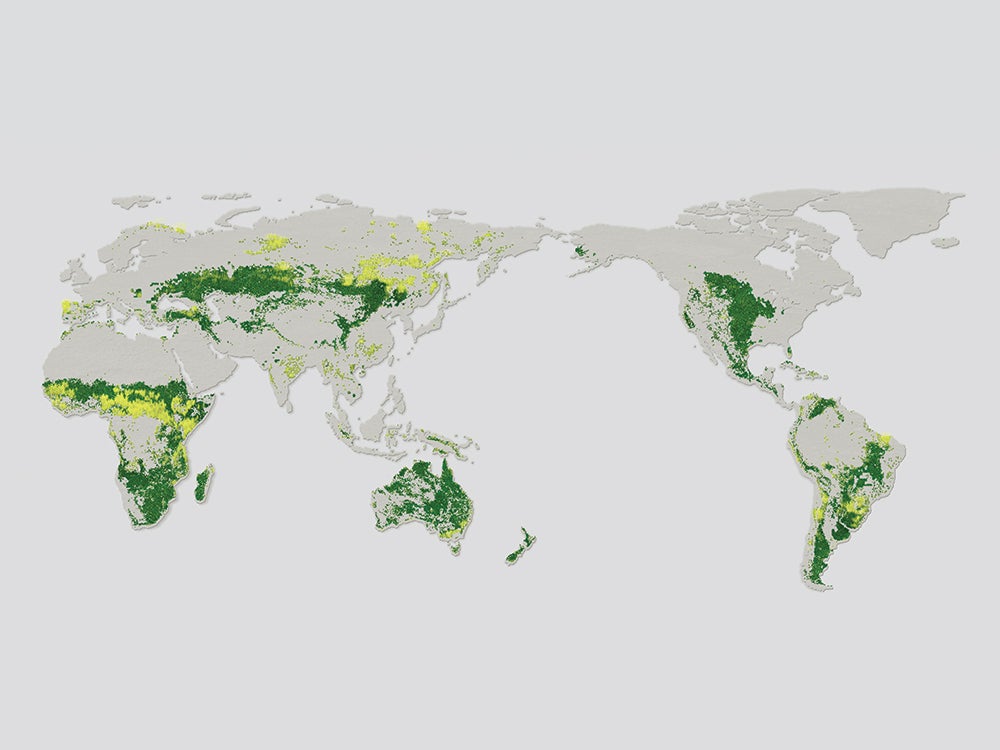 Global cleanups pull plastic from oceans and pledge drives guard rainforests, but grasslands get very little love. Only 5 percent of Earth’s remaining meadows are preserved, making them the least-protected biome.

Humans have already destroyed more than 90 percent of the planet’s grass, most of it to produce our food: Grazing alone takes up one-quarter of all land. What’s left is fragile because grasslands’ seasonality makes them vulnerable to climatic changes in precipitation and temperature. This is what remains.

Tanzania
This savanna is one of the oldest ecosystems on Earth. Ecologists believe the area’s weather, flora, and fauna have barely changed over the past million years. Though the plain is well-​­protected by Serengeti National Park and Ngorongoro Conservation Area, the human population is nipping at the fringes. Grazing cattle wander into the protected areas, and intruding poachers illegally kill large mammals whose droppings help feed the plants.

India
The vast Gujarati plains remained mostly pristine until the 1960s, when two major changes began to chip away at the ecosystem. First, the government planted Prosopis juliflora to buffer against the marshy salt flats in the north, but the invasive shrub wound up choking out native plants. That same decade, humans dammed rivers to redirect hydration toward crops. Without those flows to dilute seawater, about half of the soil in the Banni is now salty and infertile.

China, Mongolia, Russia
More than 342,000 square miles of temperate grassland extend from northeastern China to ­Siberia. Drought and mining are already shrinking the steppe, and a push toward privatization has exacerbated things. Farmers have replaced traditional nomadic livestock, which go easy on flora, with larger herds on smaller plots. Rising demand for cashmere has also driven an increase in domesticated goats, which eat roots, making it harder for plants to regenerate.

North America
Just half of the Midwestern plain’s 720 million original acres is still wild. The prairie’s demise began when ­19th-​­century settlers killed 30 to 50 mil­lion American bison—a mammal that grazes on and fertilizes native flora. At the same time, farmers rapidly converted the sea of grass into fields of wheat and corn. Unlike hardy blades, these crops can’t withstand drought (cue: the Dust Bowl), but we ­haven’t learned. We’re still losing more than 1.5 million acres to agriculture every year.

Argentina
Thanks to fertile soil in eastern Argentina, wheat, corn, and soy farming escalated in the late ’80s and early ’90s. Today, driven by spiking global demand, soy has ­become the ruling crop—much to the detriment of the land. The fields suck nitrogen, phosphorus, and potassium from soil quicker than farmers can replace them. People are taking up space too: More than half of Argentines reside in big cities like Buenos Aires that used to be wild meadow.