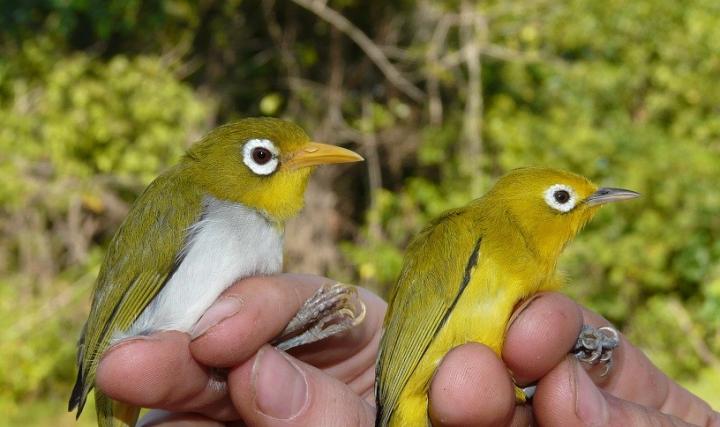 Say hello to the bird world’s newest additions: the Wakatobi white-eye and the Wangi-wangi white-eye. Discovered in the Wakatobi Archipelago southeast of Sulawesi, Indonesia, these birds could reveal more about how other species of white-eye have evolved.

Zoologists from Trinity College Dublin led by Nicola Marples, along with researchers from Halu Oleo University in Sulawesi and with support from research expedition organization Operation Wallacea, had been studying birds in and around Sulawesi for 20 years. The pinwheel-like island is the fourth largest in Indonesia, spanning over 69,000 square miles.

Geologists believe Sulawesi formed when fragments of the Asian and Australian tectonic plates collided, creating a biogeographic crossroads in the form of an island. When British naturalist Alfred Russel Wallace visited Indonesia in the 19th Century, he identified two distinct areas of biodiversity: The western half of the archipelago contained species related to those identified in Asia, while the eastern half’s species had Australian origins. He drew a line along the Makassar Strait, between Borneo and Sulawesi, to separate these regions.

But Wallace called Sulawesi “the anomalous island” because it contained species from both sides of that line. It’s the only place in the world, for example, where you can find both Australian marsupials and Asian old world monkeys. This has made classifying new species difficult—it’s really helpful during classification to have an idea of an organism’s long-term geographic lineage. Birds often muddy things up in this way, since they can migrate between isolated islands and form new populations.

Marples’s team identified differences in the birds’ body sizes, genes, and songs to see which bird populations had branched off into new species. When groups of birds separate and develop different songs, they won’t mate with each other—after generations, the animals might change so much that scientists classify them as different species. In the case of white-eyes, which researchers say are especially keen to colonize islands and genetically isolate themselves, Sulawesi’s Wakatobi Islands provided the perfect evolutionary playground.

A family of tropical and subtropical birds, white-eyes spread rapidly throughout the Eastern Hemisphere—they’re native to sub-Saharan Africa, South and East Asia, most Indian Ocean islands, and the western Pacific. Scientists were aware of the Wakatobi white-eye’s existence—named for its native range throughout the Wakatobi Archipelago—for years, but only now have they officially decided to classify it as its own species, as they note in their study published Tuesday in the journal Zoological Journal of the Linnean Society. The Wangi-wangi white-eye, on the other hand, has only just been found on one island in the group—Wangi-Wangi, of course—and its closest relatives are thousands of miles away.

“To find two new species from the same genus of birds in the same island is remarkable,” Marples says in a press release.

Researchers believe the discoveries will be important for conservation groups, who are trying to get the Wakatobi Islands recognized as an Endemic Bird Area—that’d give their wildlife more support and protection. For now, at least the two white-eyes can revel in their novel species-hood.