The insect has wreaked havoc for residents and farmers in Pennsylvania and neighboring states. 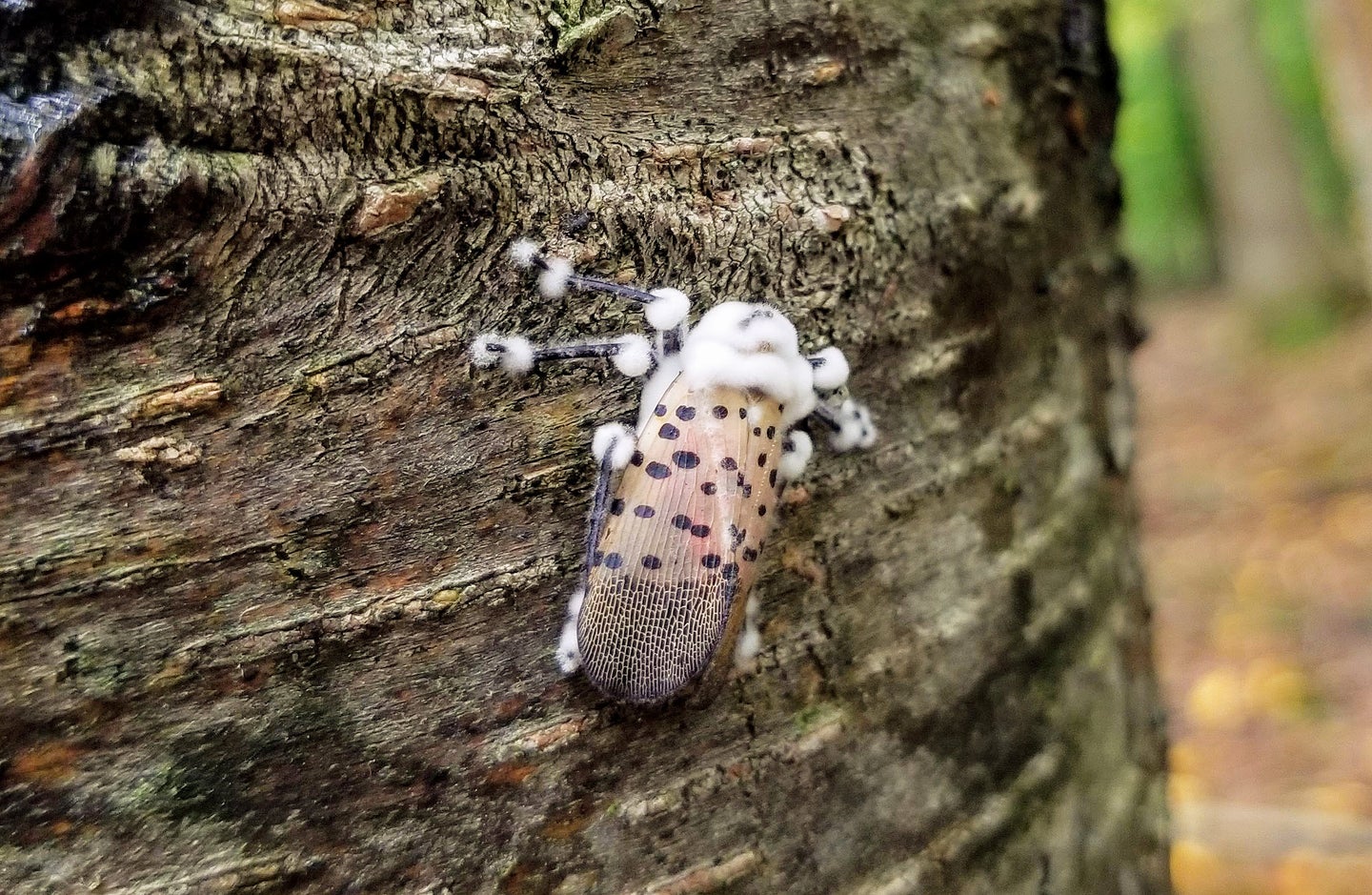 If Youtube footage is to be believed, people have taken up arms against infestations of invasive spotted lanternflies by blasting the bugs with everything from pressure washers to rock salt, dish soap and even propane torches.

“There’s a lot of people at their wits’ end,” says Heather Leach, a spotted lanternfly specialist with Penn State University.

And for good reason. In a five-year span, the plant-hopping pest has spread from its native Asian range to Pennsylvania, Virginia, New Jersey, Delaware, and Maryland—causing serious damage to crops, homes, and other property along the way. Now researchers think a pair of native fungi could join the arsenal of controls on the polka-dotted insects, according to a study out last month in PNAS.

According to the paper, a research group led by Cornell University scientists have identified two North American fungi, Batkoa major and Beauveria bassiana, that seem to be natural enemies of the spotted lanternfly. The Batkoa fungus makes a particularly spectacular show of killing off the insect pest by acting as a sort of mind-controlling parasite. The researchers believe once Batkoa infects a spotted lanternfly, the fungus compels its victim to ascend up a tree or vine; then, fungal fibers sew it to its final resting place and spores burst out of the insect’s body to shower down onto any remaining lanternflies below. The researchers think this helps them spread and infect even more insects. The other fungi, Beauveria, is already an ingredient in some EPA-approved biopesticides.

Pennsylvania agricultural officials first noticed the fungi in 2017 when they found dead lanternflies covered with white fuzz in forested areas in Berks County, Pennsylvania, and sent over the samples to the Cornell lab. Researchers there cultured the spores, extracted DNA, and used molecular testing to identify the fungal species.

“We were shocked to see this level of mortality. These naturally occurring infections could move through them like a tidal wave,” says Eric Clifton, a post-doc at Cornell and co-author of last month’s study. “It was very clear there was some kind of disease, but for a month or two, we had no idea what it was.”

Clifton and his colleagues plan to keep exploring the possibility of harnessing the fungi to control rampant spotted lanternfly populations. They’re actively gathering nymphs from the field to monitor for fungal infection, and plan to test the effectiveness of biopesticides containing Beauveria. And while there have been reports of fungus-covered spotted lanternflies in Virginia, Clifton says, researchers need to collect more samples and map the fungal pathogens’ geographic range.

“We’re learning as we go because there’s so many unanswered questions,” he says.

For those tasked with dealing with the spotted lanternfly, “We don’t know” is a common refrain when it comes to questions of how the pest lives, dies, eats, and reproduces. Experiments (at least 22 separate scientific endeavors, according to state officials) have explored the insect’s flight behavior, its genetic makeup, and whether scientists might be able to use pheromones to disrupt its mating or insecticides to protect crops from damage.

“We have very little understanding of its basic biology and behavior,” Leach says. “We still need time to develop the research.” Meanwhile, officials are trying to keep the bug penned to a 14-county quarantine zone in Pennsylvania—where the spotted lanternfly made its U.S. debut in 2014—but containment has proven to be a challenge since the spotted lanternfly will lay its eggs on just about any surface and hitchhikes in the wheel wells of road-tripping cars and the shipping crates of delivery trucks.

To that end, Pennsylvania officials maintain a hotline to respond to public sightings of the insect. The state requires permits for products leaving the quarantined area and bans some items such as firewood, outdoor furniture, and construction debris from leaving the zone at all.

Neighboring states like New York, where spotted lanternflies have been sighted in about a dozen counties, are preparing for infestation.

“It’s not ‘if’ it’s going to happen; it’s ‘when’,” says Tim Weigle, a Cornell University extension specialist who’s leading the school’s outreach programming for the spotted lanternfly. “It’s such an excellent hitchhiker, they’ve had a hard time keeping it contained.” Unlike the apple maggot or peach-favoring oriental fruit moth, the spotted lanternfly does not have discerning dietary preferences; it feeds on at least 70 plant species, from pine trees to grape vines, peach trees, shrubs, and the tree-of-heaven, a preferred host that’s widespread in the Northeast. And it’s hungry. The pest is thought to have caused 90 percent losses in recent seasons for Pennsylvania’s nearly $18-billion apple, pear, hardwood, and nursery crops.

“It feeds on practically everything,” Leach says. “It has this large buffet to feed on.”

What’s worse, as the lanternfly eats, it rains down a syrupy liquid called honeydew that coats patios, decks, and plants with a sticky goo which encourages the growth of a produce-ruining mold in crops. The feeding also weakens plants, leaving them more vulnerable to diseases, other insects, and the harsh cold of winter. Last fall, Pennsylvania growers applied costly insecticide every three to five days to stay ahead of the pest, Weigle says.

For farmers awaiting its arrival, it’s a different kind of nightmare. Doug Glorie tends to 6,000 grapevines, 1,500 apple trees, 1,000 peach trees, and 500 pear trees on his 20-acre farm in Marlboro, New York. None of that, he worries, is safe from the spotted lanternfly.

“We’re sensitized to the fact that it’s on its way. It’s not going to stop at a border or a quarantine,” says Glorie, who co-owns the farm with his wife MaryEllen. “To me it really doesn’t matter which acre it picks first. Any fruit it goes after will be a serious problem.” And it’s not just fruit growers and vintners who are concerned. Breweries will likely face impacts from the pest, which has a taste for hops.

A common advantage of invasive pests is that they often go unchecked in their new homes since they don’t have any natural enemies there, Clifton says. But last month’s study could provide an example of the opposite: While North American insects have had thousands, if not millions, of years to adapt to living alongside the fungi, the spotted lanternfly appear particularly vulnerable to them—as if the fungi are a new strain of the flu, and the pest is unvaccinated, Clifton explains.

“I don’t think these fungi will knock out every single lanternfly,” he says, “but I think we could see their populations dip, in part because of [the fungi]…we’re hoping to see more examples of these this year.”