U.S. Has Depleted Two Lake Eries’ Worth Of Groundwater Since 1900

Aquifer water levels are rapidly falling across most of the U.S., according to a new study. 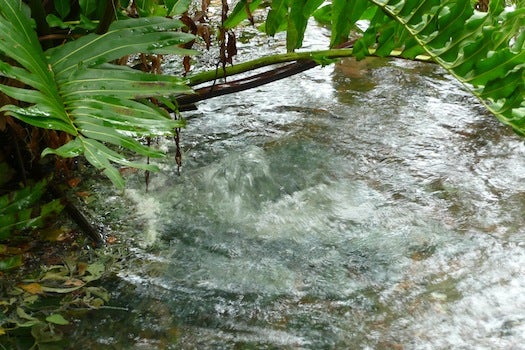 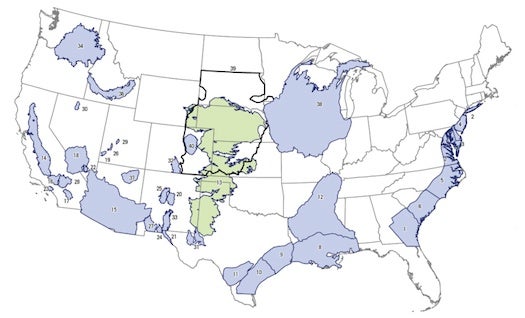 Aquifers in the Continental US

This map of major aquifers in the U.S. highlights the High Plains Aquifer (green) and the Dakota Aquifer (white, outlined in black).

Over the last century, the U.S. has depleted enough of its underground freshwater supply to fill Lake Erie twice, according to a new study from the U.S. Geological Survey. Here’s another way to understand how much water we’ve used. Just between 2000 and 2008, the latest period in the study and the period of fastest depletion, Americans brought enough water aboveground to contribute to 2 percent of worldwide ocean level rise in that time.

Lowering aquifers mean less local water for the communities that depend upon them. They can also suck dry springs, wetlands and other surface water features, Konikow wrote in a report the survey published yesterday. Scientists don’t always have a tally for how much water an aquifer holds, however, so it’s more difficult to say what percentage of the U.S.’ overall groundwater is gone. (In some systems, it’s difficult to determine where the bottom of the aquifer is, Konikow explains.)

The problem also varies in severity in different parts of the country. In the most depleted aquifers, including those underneath the southern High Plains and Texas, “more than 50 percent of the thickness of the aquifers has been dried up,” Konikow says. In Alabama and Mississippi, rice farmers have taken out large volumes of water, but there also seems to be a lot of water left. Meanwhile, two aquifers in Washington, Oregon and Idaho actually held more water in 2008 than they did in 1900. Those were the only U.S. aquifers to gain water over the study period.

Water collects in underground aquifers in many ways, sometimes over thousands of years. When people pump it to the surface to irrigate their crops, for example, some of it does seep back into the Earth and into the aquifer. Rainfall and rivers all carry water back into the ground and in some areas, the local government even pumps water underground in an effort to maintain their aquifers. Nevertheless, those two Lake Eries’ worth of water refers to how much net groundwater the U.S. has lost, as people are taking it out much faster than it’s going in. 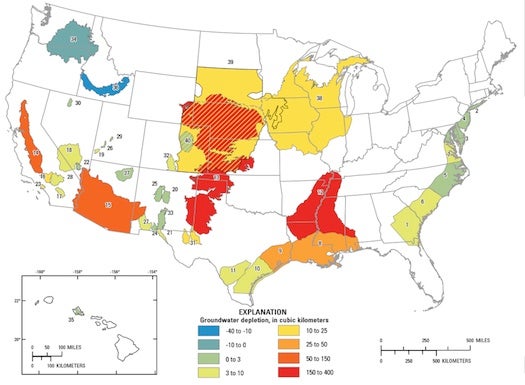 Groundwater Depletion in the US

Alaska isn’t included in this map because it hasn’t had any significant groundwater depletion.

Konikow’s report doesn’t say much about what will happen to the people and industries that sit on top of depleting aquifers, but a recent New York Times article offers a glimpse. On Sunday, the paper reported on falling water levels in the High Plains Aquifer, which lies north-south from Wyoming and South Dakota to the Texas Panhandle. In Kansas, the aquifer fell by an average of 4.25 feet in 2011 and 2012. Some wells fell by as much as 30 feet. The changes mean harder times for farmers and a shift away from thirsty crops, such as corn, toward less water-intensive activities, such as growing sorghum or ranching, the Times reported.