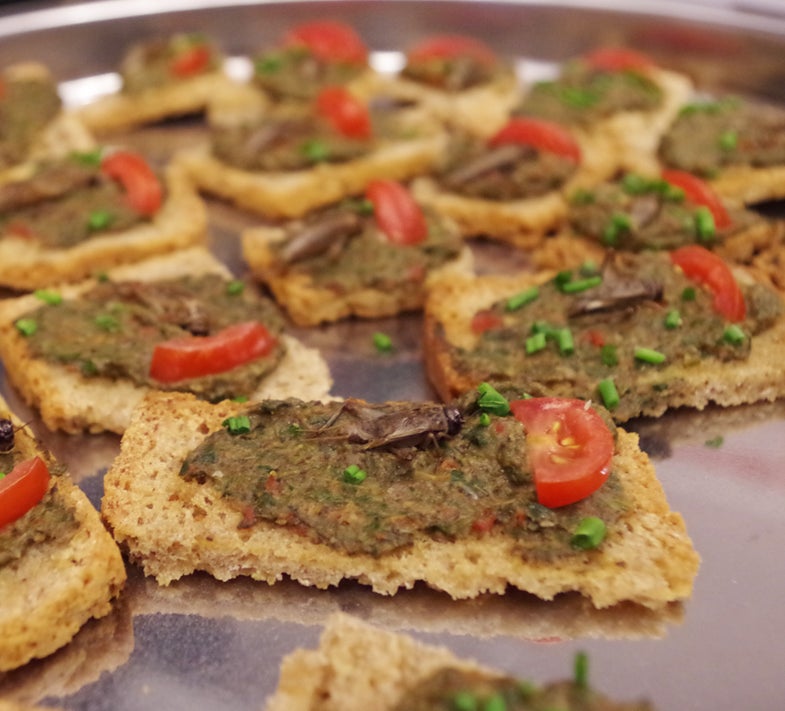 The Future Food Salon describes itself as “a celebration of food in an arts-soaked setting that explores with enthusiasm what we will be eating in the future.” This is not untrue! But it would be perhaps more descriptive to say the Future Food Salon is like a book reading at which you eat bugs. Lots of bugs.

I headed out to the far west side of Manhattan yesterday evening, to one of the many airy, modern, vaguely industrial event spaces that seem to be all there is between 18th and 34th Streets, west of 10th Avenue. Given that I don’t think anyone can actually live out there, I think I’ve spent about as much time as anyone in that part of town; in addition to art galleries, it’s where tech companies introduce and demo new gadgets, and, I guess, it’s where you’d go to see Andrew W.K. get zapped with a million volts of electricity. But yesterday I was going to eat bugs, not play with new cellphones.

The event was cheerful and moderately drunk; the bartender was pouring, like, completely full-to-the-brim glasses of wine, possibly to counter any trepidation the guests had about eating toffee that was intentionally covered with bugs. The hosts were a mixture of Future Food Salon people (enthusiastic Torontonians) and do-gooders interested in promoting sustainable bug-eating (mostly from Austin, Texas), and the guests were a nice mix of journalists, photographers, NYU students who had come out to see the panels that preceded the tasting, and a few excessively stylish people who looked like they’d wandered in off the street and might be heading to eight or nine gallery openings after this. I was there for the bugs.

The eating of insects as food is called, sort of clinically and unappetizingly, “entomophagy.” It’s not unusual outside of North American and Western Europe; in Mexico, for instance, chapulines, or grasshoppers, are a favorite bar snack and taco filling. But here, eating bugs is pretty much limited to reality TV shows.

That could change, as we’re looking at a near-inevitable food crisis brought on by factory farming. Factory farm animals, like cows, pigs, and chickens, consume massive amounts of grain, water and land, and require the deforestation of huge swathes of the planet. A 2009 study estimated that factory livestock is responsible for 50 percent of the world’s man-made greenhouse gases. It’s no surprise, then, that scientists and others have been looking to alternatives, from lab-grown meat to, well, bugs. 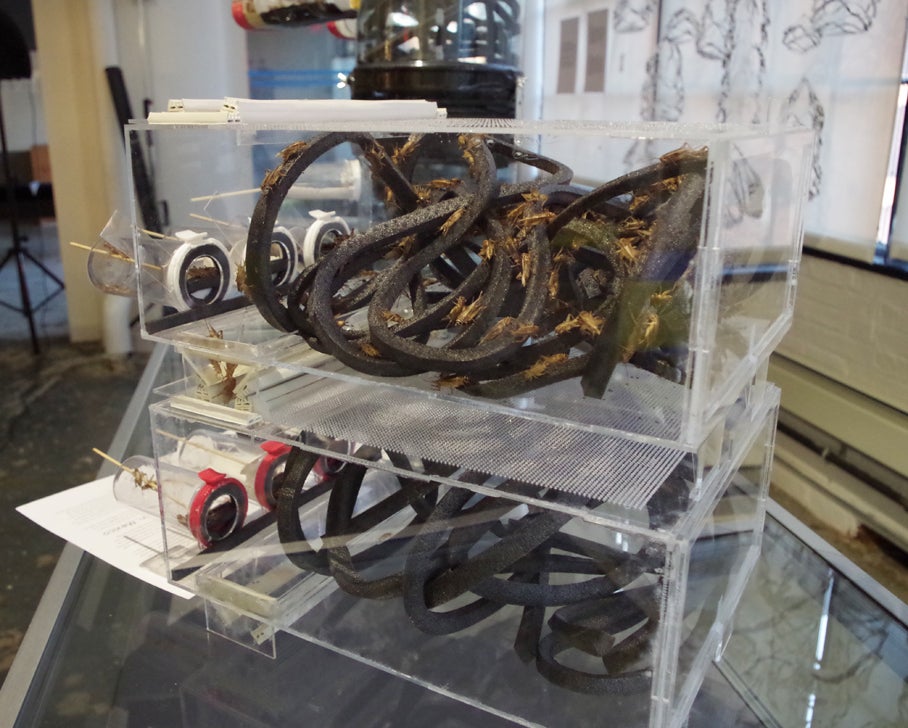 A Cricket Coop For Your Home

Entomophagy has a lot going for it. Bugs are high in protein, so they’re a good replacement for mammal or bird meat. They eat less food, reduce our need for pesticides (because, um, that would kind of defeat the point), and contribute minimal greenhouse gases. Many types of insects (like mealworms) don’t even require water, since they get enough from their food. Insects are also easy to raise at home, and don’t take up much space. At the Future Food Salon, I was shown a mockup of an in-house cricket enclosure, designed to be placed on your counter next to your microwave and toaster oven (pictured above). It worked pretty much like a tiny chicken coop–a cricket coop, you might say. Click through to the gallery for a seven-item hors d’oeuvres spin through the wonders of bug-eating. 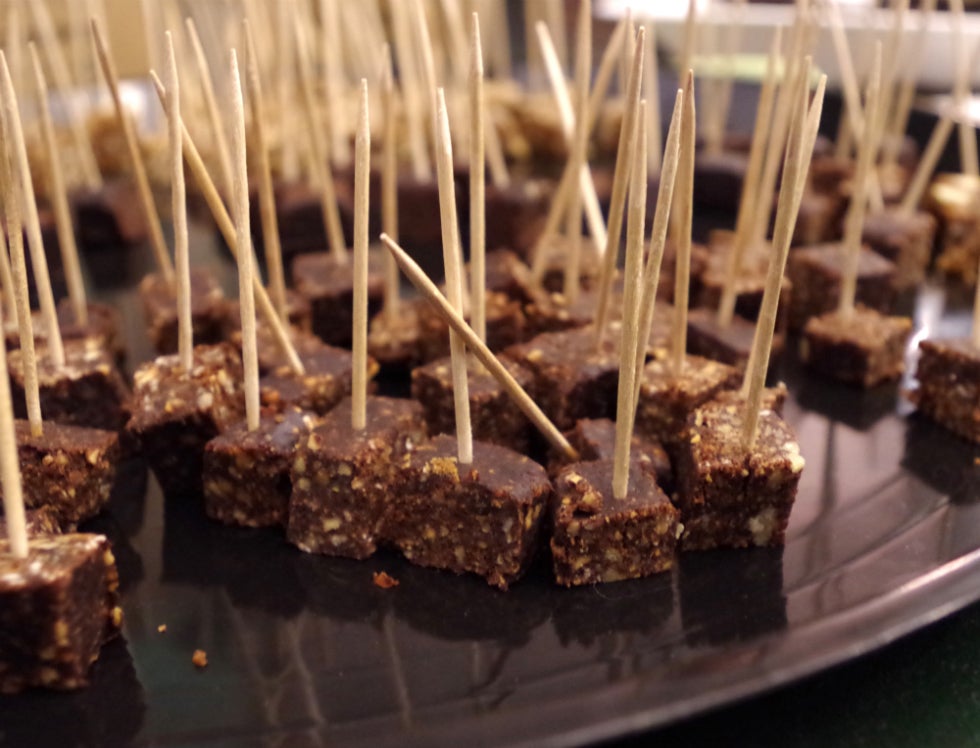 Chapul, a company that started out on Kickstarter, makes a few kinds of dense bars that use cricket flour. Cricket flour was used in several of the baked goods I ate at the event; it’s made by roasting and then grinding crickets into a fine flour. I ate two kinds of Chapul bars: the Chaco, which is peanut butter and chocolate, and the Aztec, which includes dark chocolate, coffee, and cayenne pepper. They had the consistency of an energy bar or, well, a health bar: dense, sort of fudgy but much more dry. The Chaco I didn’t much like; that typical energy-bar texture isn’t one of my favorites and the Chaco is very mild in flavor, with the peanut butter barely noticeable. The Aztec, on the other hand, had lots of flavor! Big flavor! The cayenne comes on late, but it was definitely there, and the coffee and dark chocolate added a nice smokiness that I didn’t expect. I didn’t taste anything particularly cricket-y about the Chapul bars, but energy bars are always looking to add protein, and flavor isn’t necessarily the first priority, so cricket flour makes a lot of sense: not much flavor, but a big wallop of protein. 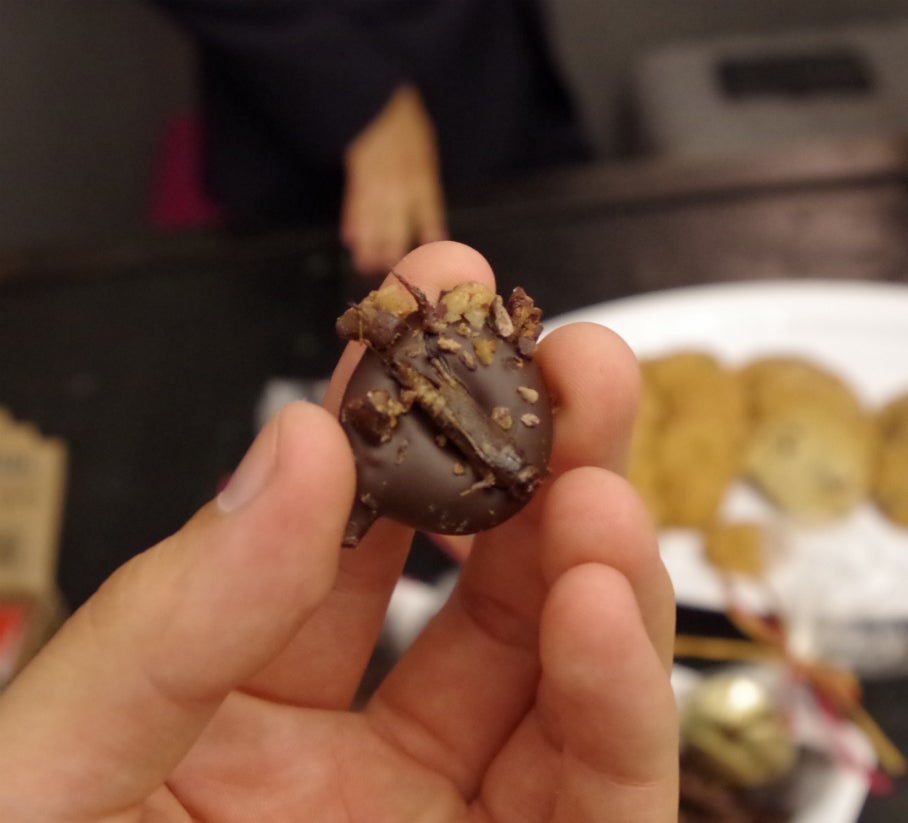 Fat Turkey, an Austin, Texas-based chocolatier, brought some lovely chocolate coins to the event…with big, fat crickets on them. They’re dark chocolate, with a few chopped walnuts (correction: these were caramelized cocoa nibs) and one big cricket laid right on top. These I liked a lot, although the crickets seemed mostly unnecessary. The chocolate had just the right balance of sweet and bitter, with a very nice mouthfeel–not too melty, not too firm. The cricket wasn’t noticeable at all; I poked it with my finger and found that it was soft and pliable, so the pleasant crunch of the coin was due only to the walnuts. Still, I suppose it adds a bit of protein–and shock value, if you’re into that kind of thing. 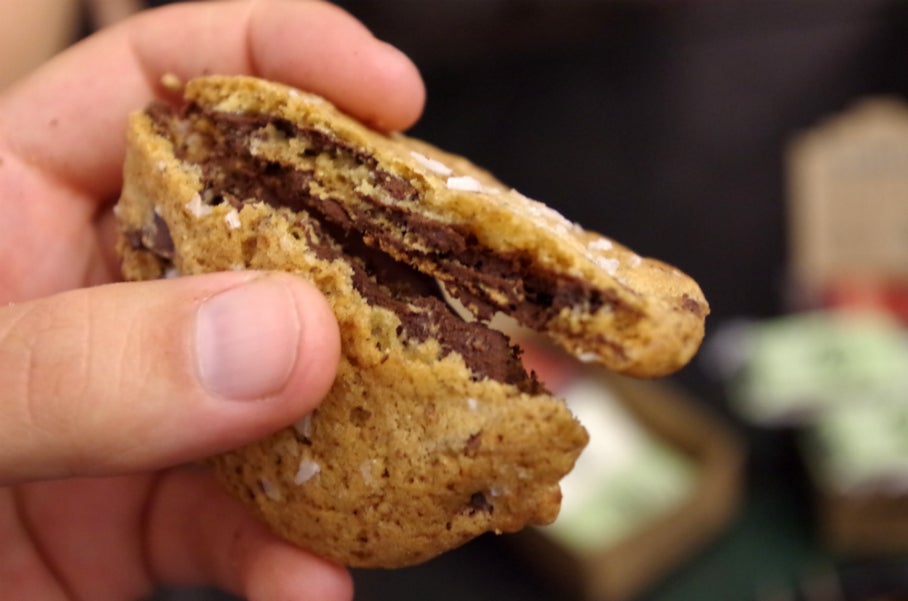 Oh man. These are my favorite of all the treats, by far. They are SCRUMPTIOUS. Made by an Austin baker named Emily Breedlove and brought to the Future Food Salon by an Austin-based non-profit called Little Herds, the cookies–made with cricket flour–are crispy, rather than gooey, dense but moist, and, best of all, heavily salted. They’re damn good cookies, cricket flour or not; I convinced a dubious NYU student next to me to try them and his gross-out and delight levels seemed to even out a little bit. Robert Nathan Allen from Little Herds tells me that the bakers have told him the cricket flour is easy to work with, but “slightly oily, like safflower seed flour.” So the bakers can actually take out some of the fat and sugar they’d normally put in the cookies! I didn’t notice, either; these cookies are good, though Allen tells me the cookies aren’t commercially available. 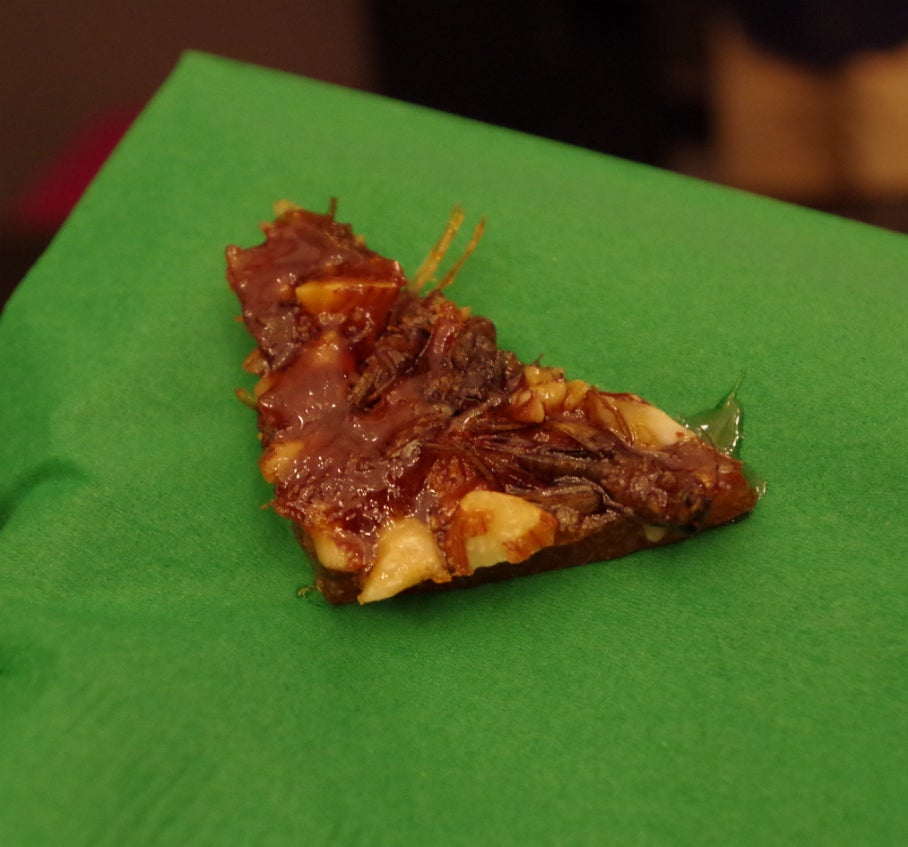 The cricket brittle, like a few of the upcoming treats, was made by Cookie Martinez, a Toronto-based cook. When I make brittle, I use nearly equal parts butter and sugar, but Cookie’s “crittle” was made of exclusively sugarcane. That lent it a very pleasant toasted flavor, almost like mildly burnt marshmallows, but the texture ended up a bit stickier and gooier than I like my brittle. It wasn’t, well, brittle enough in texture. But it was topped with crickets and chopped almonds and tasted pretty great, and I find it hard to get too upset about roasted sugar. 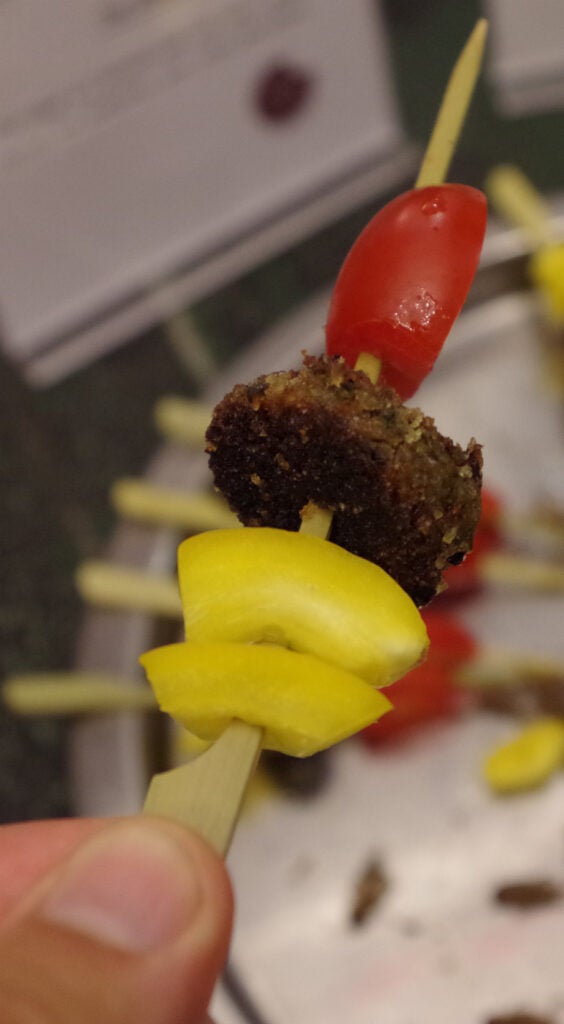 Cookie Martinez also brought the cricket kabobs, which beg the question: for alliteration’s sake, should they be “kricket kabobs” or “cricket cabobs”? The small skewer included a cherry tomato, a few pieces of yellow bell pepper, and a sort of cricket fritter, which was essentially a falafel using ground crickets instead of chick peas. It was served with a guava-based dipping sauce–a little sweet, a little sour, a little spicy. I actually loved the idea of the cricket falafel, but they were made a little too far in advance so were kind of limp when they should have been (and I’m sure were, when they were first made!) crisp. The texture of the falafel was finer than a chick pea falafel, but none the worse for it. The taste was fairly mild, a little nutty, but I think it would have taken to some heavy spicing pretty well. I’d have liked it even more with some tahini and sriracha. 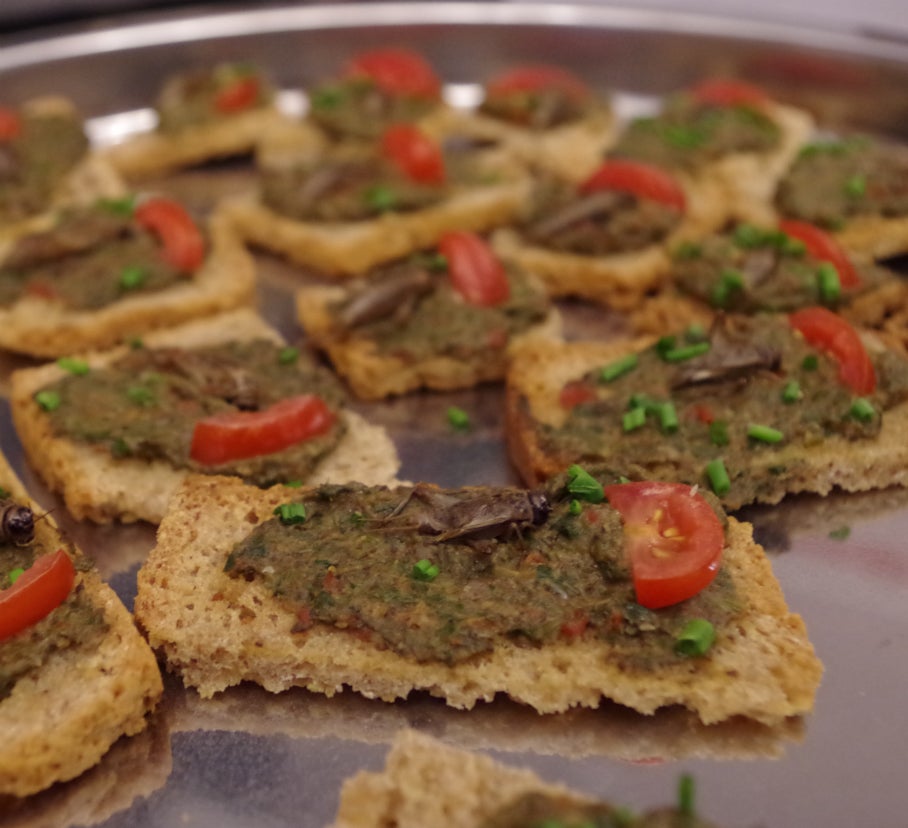 The cricket crostini is another Cookie Martinez creation: a crisp piece of cracker-like bread topped with a mushroom and herb pâté and finished with a few bits of chives, a segment of cherry tomato, and a whole cricket. The pâté was almost like a duxelles, a strongly spiced mushroom paste that I liked a lot. Duxelles is an easy preparation to mess up; it’s often bland. But this one was really well-spiced, nice and bright and flavorful–although it didn’t, I found out, have any cricket in it at all. The cricket on top was bold aesthetically, but had very little flavor or texture; usually the cricket adds a little bit of texture or nutty flavor to the dish but I didn’t taste much of anything this time. Still, pretty good! 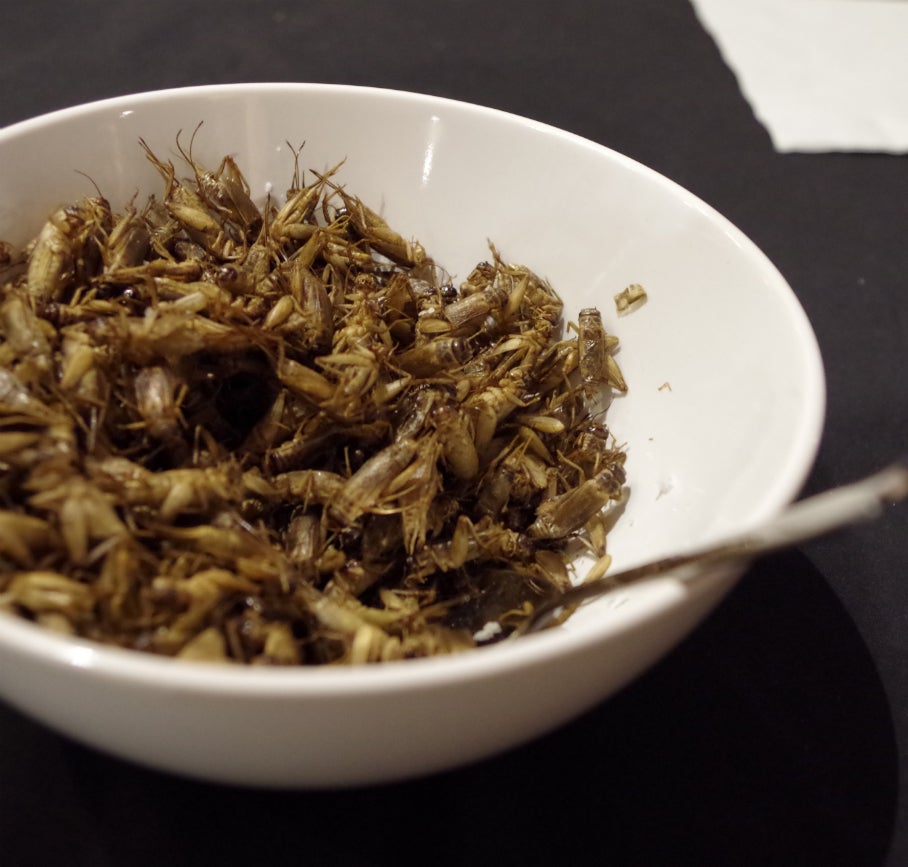 Next to the bar were two bowls of crickets. They were prepared like Mexican chapulines, or grasshoppers: deep-fried, heavily salted, meant to be eaten while drinking booze. They’re a low-fat, high-protein substitute for nuts or popcorn or pretzels. It’s sort of intimidating to just grab a whole cricket and chomp down on it, but the girl at the bar poured me a glass of wine right up to the brim, so I was feeling cheerful and adventurous, and the cricket actually wasn’t bad at all! I expected it to be crispier, but the flavor is really quite delicate and nice: a touch of umami, a touch of nuttiness, and salt. I think it might be better with heavier spicing, since the cricket doesn’t taste like much by itself; I’d have loved a chili-spiced cricket with some lime to squeeze over it. But I think the Future Food Salon wanted us to really taste the cricket, which makes sense. Oh, and the legs stick in your throat a little bit going down.
Animals
Insects
Nutrition
food