How Did Mars Die? NASA’s Newest Spacecraft Aims to Find Out

MAVEN will try to decipher the history of Mars' atmosphere and how it was lost. 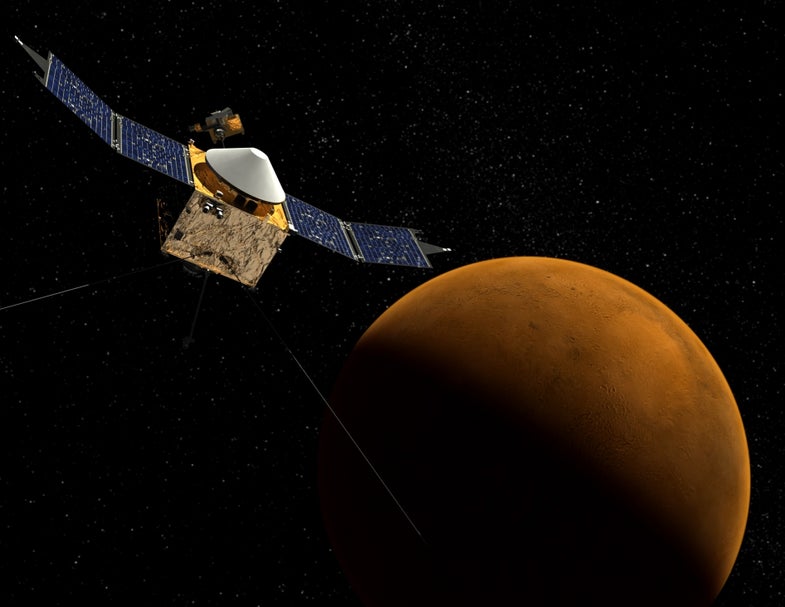 CAPE CANAVERAL, Fla. — In their infancy, maybe even into their adolescence, Earth and Mars were more alike than they were different. Each rocky world was pockmarked by volcanoes, and waterways carved both surfaces. Atmospheres blanketed both planets, and each harbors rocks that could only have formed in lakes or oceans. Four billion years ago, alien visitors standing on each planet’s surface might have looked up and beheld an identical blue sky.

But like any siblings, the two planets changed as they grew older. Earth’s liquid iron core creates a magnetic field, which protects the planet from blistering solar rays. Somehow, Mars’ geomagnetic dynamo died. Earth, the bigger planet, held onto its atmosphere; little Mars, with only 38 percent of Earth’s gravity, saw its air stripped away. Earth kept its oceans and its water cycle, and Mars became the dusty, dry and dead world we know today.

How this happened — and why it happened to Mars, and not us — is the biggest unexplored question on the Red Planet. Answering it will shed light on Mars’ history — and how long it may have been a hospitable home for life. The Mars Atmosphere and Volatile Evolution Explorer (MAVEN) will launch as soon as Monday to find out.

Buttoned Up and Go for Launch

Before it can answer any questions, MAVEN has to get to Mars — a huge challenge even if you don’t count the 10-month journey between the two planets. About five years in the making, MAVEN was designed and built in Colorado, and a C-17 cargo plane finally brought it to Kennedy Space Center Aug. 2. Scientists and engineers spent the next three months filling it with rocket fuel, installing explosive charges so it can free itself from its launch casing, and making sure everything works like it should.

MAVEN was already buttoned up in its rocket fairing when I visited it earlier this month, while it was still in a cleanroom at Kennedy’s Payload Hazardous Servicing Facility. Workers wearing white bunny suits stepped around a bulky white hose, which snaked into the cone-topped cylinder to deliver filtered, refrigerated air. Inside, MAVEN’s solar panels were folded tight against its 8-foot cube body. 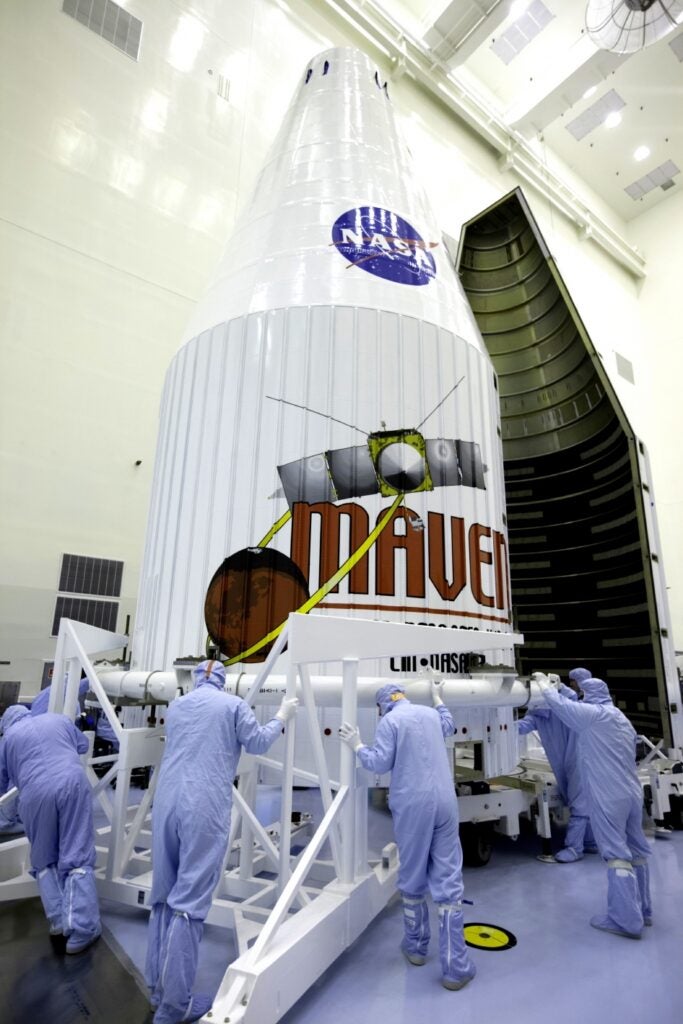 While most of us think of space as frigid, the warmth of launch and the sun can actually be a bigger problem, explained Jim Morrissey, MAVEN’s instrument systems manager. Keeping MAVEN air-conditioned gives it more time to warm up after it blows away its protective fairing.

After it passed several crucial instrument tests, MAVEN was attached to its Atlas V rocket and made its way to the launch pad at Cape Canaveral Air Force Station, down the road from KSC. It’s a different facility than the one that launched the space shuttles for 30 years. Last week, while most of the eastern seaboard slept, a crew drove the rocket 5 mph the roughly 15 miles to the launch pad, arriving just before 3 a.m.

As of Nov. 14, everything looks good and launch is a 60 percent “go” — at this point, the only hiccup will probably be the weather, which might be cloudy and rainy. The team only has 20 days it can try to launch, and two-hour daily windows open for the first time at 1:28 p.m. eastern time Nov. 18. Timing is so crucial that MAVEN’s team got a special exception to keep working during the 17-day government shutdown last month.

Each launch window lasts about two hours, and is based on Mars’ location and Earth’s position relative to the sun. Spacecraft bound for Mars and other distant destinations typically take off from KSC because they can safely launch eastward to take advantage of Earth’s rotation.

“You want to get the most pushoff from Earth that you can,” explained Bruce Jakosky, MAVEN’s principal investigator and a scientist at the University of Colorado at Boulder. “You want it to be flinging you at Mars.” 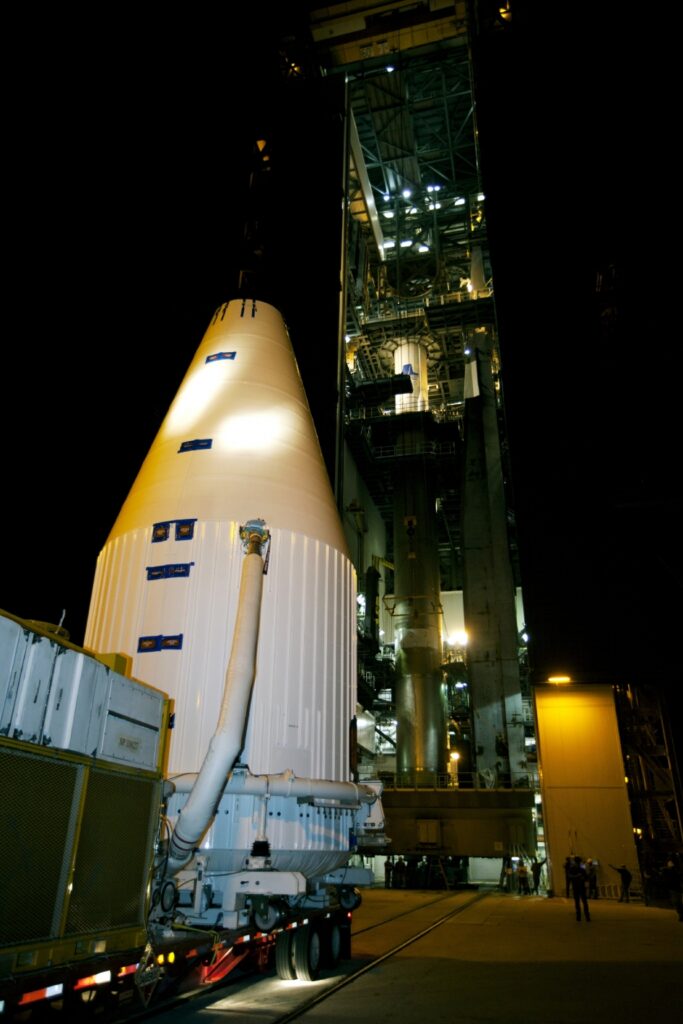 A transporter moves NASA’s MAVEN spacecraft, inside a payload fairing, to the Vertical Integration Facility at Launch Complex 41. Last week, it was hoisted atop a United Launch Alliance Atlas V rocket, which will boost it into space and on to Mars.

Once it escapes Earth, MAVEN will orbit the sun for 10 months, arriving at Mars on Sept. 22, 2014, right when the planet is in position waiting for it. Once it’s captured by the planet’s gravity, MAVEN will orbit Mars in a dramatic elliptical orbit that takes it between 93 miles and 3,800 miles from the planet’s surface. That will allow it to dip into the uppermost atmosphere, and fling itself halfway to the moon Phobos.

Five times during its one-year mission, MAVEN will dip to just 77 miles above Mars — just a handful of miles past the generally accepted limit of space at Earth. Its eight science instruments will sip the tenuous high atmosphere, figuring out the composition of gases up there, and measure solar radiation, high-energy particles and the planet’s limited magnetic field. This will paint a detailed picture of Mars’ upper atmosphere and ionosphere, and how the sun and solar wind interact with it, for the first time.

As Curiosity and Opportunity scrutinize the surface, MAVEN is the first spacecraft designed to study what happens above. Ultimately, MAVEN will help us understand how Mars lost its water and its atmosphere — and maybe, what that means for life.