With no meal for 86 million years, and barely enough oxygen to sustain metabolism, can a single-celled organism really be... 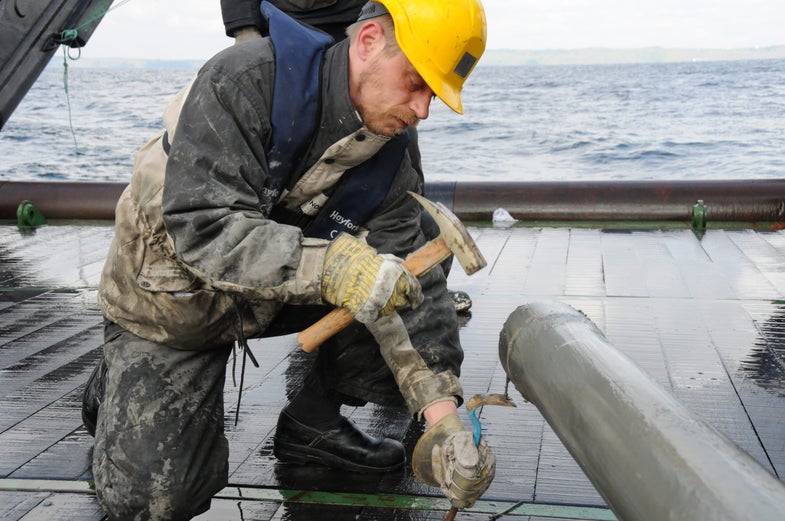 Hans Røy opens a sediment core. The mud in the opening of this core is from the last ice age 10,000 years ago. The mud sampled from the Knorr was from the time when dinosaurs walked the earth. Bo Barker Jørgensen/© Science/AAAS
SHARE

With no meal for 86 million years, and barely enough oxygen to sustain metabolism, can a single-celled organism really be considered alive? Yes, but only just, according to a new study. A microbial community buried under the ocean floor since the mid-Jurassic era is still hanging on. Their tenacity could pose some interesting questions for the hunt for alien life.

Plenty of microbes live beneath ocean sediments — about 90 percent of the planet’s unicellular organisms are found there, and they’ve long been subjects of study among biologists interested in extreme environments. Hans Røy and colleagues wanted to dig even deeper to examine the most barren places, where food supplies are scarce or nonexistent and where oxygen barely reaches.

Røy and colleagues from Denmark and Germany surveyed red clays buried deep in the Pacific Ocean, along the equator and into the North Pacific Gyre current system. From the research R/V Knorr, they drilled core samples 92 feet into the ocean floor, dating to the time of the dinosaurs, and tested the cores with oxygen sensors. They found that organisms live in the deepest parts of these sediments and that they’re using oxygen for respiration — only incredibly slowly. The deeper the sediments, the less food and oxygen is present, and the less oxygen is used up, too. These organisms have not had access to a fresh food supply since their burial, 70 to 86 million years ago.

It takes the microbes about 1,000 years to double their biomass, which could also mean it takes them 1,000 years to divide, Røy and his colleagues found. E. coli, by contrast, takes 17 to 30 minutes. Put another way, to be sure these things were actually living — meaning undergoing metabolic processes and growing biomass — you would have to wait 1,000 years.

Røy and colleagues believe these microbial communities are living at the absolute limit — they have the bare minimum energy required to keep their DNA intact and their proteins functioning. This is interesting for a couple reasons. First, these life forms are definitely odd, and they suggest that scientists’ knowledge of prokaryotes is incomplete at best. The way unicellular organisms live in the lab is nothing like the way they live beneath the ocean. Second, they once again prove that live persists where it would seem physically impossible — and that is an interesting finding if you’re interested in astrobiology. Even in the harshest environments on this planet, where access to any form of energy is limited at best, microbes can live. Could they live somewhere off this planet, too?

The study appears in the journal Science. Calm Seas at the Equator