This Is the Food We’ll Eat on Mars 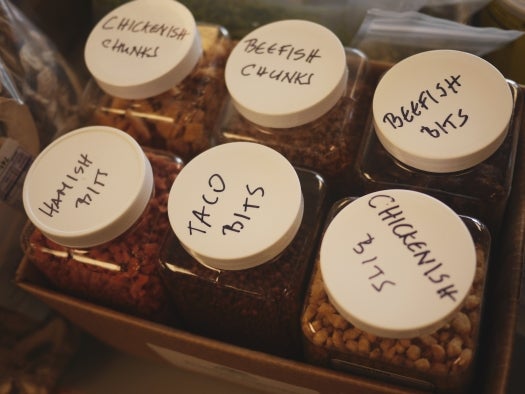 “Turn it just like this,” the uniformed instructor tells the alert crew of trainee astronauts gathered around the workspace. “And then this next piece twists in the other direction.” The first trainee approaches the table.

The instructor, Rupert Spies, is reassuring. “Or, if you don’t want épi de blé, you could just leave the dough as a regular baguette.”

We are at Cornell University, in a culinary classroom, where nine elite trainees are preparing for a simulated space mission. They are spending a week here learning how to cook on Mars. Today’s lesson is on baking bread and pizza from scratch.

The project, called HI-SEAS, is intended to help build a strategy for feeding a human Mars colony, analyzing energy and resource requirements and nutritional parameters, and exploring the hypothesis that giving astronauts a choice of tasty foods and allowing them to prepare their own space cuisine will significantly improve morale.

The study will culminate next year in a rigorous mission during which the astronauts — six final participants chosen from the nine here today — will spend 120 days isolated in a Martian habitat high on Mauna Loa, a volcanic mountain in Hawaii, with no vegetation in site, cooking and eating exclusively dehydrated and shelf-stable foods using skills and recipes they’re developing together this week. The kitchen here at Cornell is crammed with space-ready ingredients of all kinds: freeze-dried beef and chicken chunks, freeze-dried shredded cheeses of various kinds, dehydrated fruits and vegetables, powdered spices, seaweeds and agar, and a concentrated butter with all the moisture centrifuged out of it. From these building blocks, the crew will have to creatively feed themselves for four months.

One of the primary concerns about a human mission to Mars is: We simply don’t know how the human mind responds to spending months or years in an alien environment millions of miles from the other members of your species. “In space, you’re in a form of sensory deprivation,” says Kim Binsted, one of the HI-SEAS project leaders. “You don’t see the colors you’re used to. There’s no real-time communication.” So how can long-duration astronauts maintain a sanity-shielding link with humanity? Delicious, familiar food is crucial. 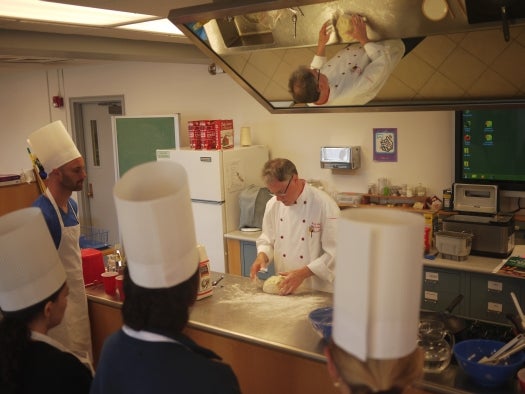 But it’s not easy. In order to survive a trip to Mars, Earth food has to be shelf-stable for at least a year — dehydrated if possible, canned if not. Making matters worse, the human sense of taste and smell diminishes dramatically in space. Crewmembers on the ISS and other missions get in the habit of drenching every meal in hot sauce to compensate.

“Deep frying is not compatible with life in a remote habitat on Mars.”To that end, Binsted and her collaborators, including Spies, a senior lecturer at Cornell’s hotel school, and Jean Hunter, a professor of biological engineering who helped develop the process for manufacturing Pop Rocks, are working with the carefully selected crew to explore ways of making dehydrated space food compelling. Teaching the crew to cook is essential, providing variety and choice in the diet, as well as a focused, pseudo-domestic communal activity for the team. The kitchen in the simulated habitat will include equipment chosen for energy efficiency and minimal space requirements: a convection oven, an induction cooktop, a pressure cooker, an immersion blender. They can cook whatever they want and are encouraged to experiment — within certain engineering limits.

“Deep frying is not compatible with life in a remote habitat on Mars,” says Hunter: with atmospheric pressure on Mars being about half of what it is on Earth, reduced air resistance to spattering oil would result in droplets throughout the confined crew quarters. In the Hawaiian simulation, the crew will be permitted 8 minutes of showering per week, and the habitat, while not completely sealed, will have very limited air exchange, so the atmosphere is expected to be far from fresh.

That, Binsted explains, is a possible explanation for astronauts’ reduced sense of smell, which is not fully understood. It could be simple saturation, that the nose’s sensitivity shuts down when it’s cooped up with strong odors. Binsted was a simulated astronaut herself in an FMARS mission in 2007, when, she recalls, “when the final bell rang, we all went outside and breathed the fresh air for an hour or so; and then, as soon as we got back into the habitat, we realized it stank!”

The leading explanation, though, is the physiological effects of microgravity. At the same time as the Hawaiian simulated mission, another group will undergo simulated microgravity in Texas, spending four months straight on mattresses inclined at 6 degrees so their heads are lower than their feet. Their muscles atrophy, their faces puff up, and — most important — their nasal tissues swell, reducing airflow and the ability to smell. Both groups will be regularly tested with acoustic scans and airflow meters to see how the shape and function of their nasal cavities change over time.

Many of the crew members here have little to no cooking experience, but they’re eager to learn. Simon Engler, a roboticist who developed a remote explosive-hunting robot called Prairie Dog when he was deployed in Afghanistan, has never made bread before. “I always felt, the only time you think about food during a mission is if the food’s not good.” But he’s excited and proud of his edible creations today.

“I think this is the best pizza I’ve ever tasted,” says Yvonne Cagle, an Air Force colonel, MD, and qualified NASA astronaut. “But maybe that’s just because of the feeling that we made it together.”

Personally I think it’s the latter. The hot, yeasty crust is excellent, but the toppings of reconstituted potato slices, reconstituted freeze-dried cheese, reconstituted garlic and such may take a little getting used to. And that’s what the mission is all about — practicing, developing, polishing a new kind of cuisine for outer space.

“I will never go to Mars,” says Jean Hunter, “but I hope they’ll be eating my recipes.” 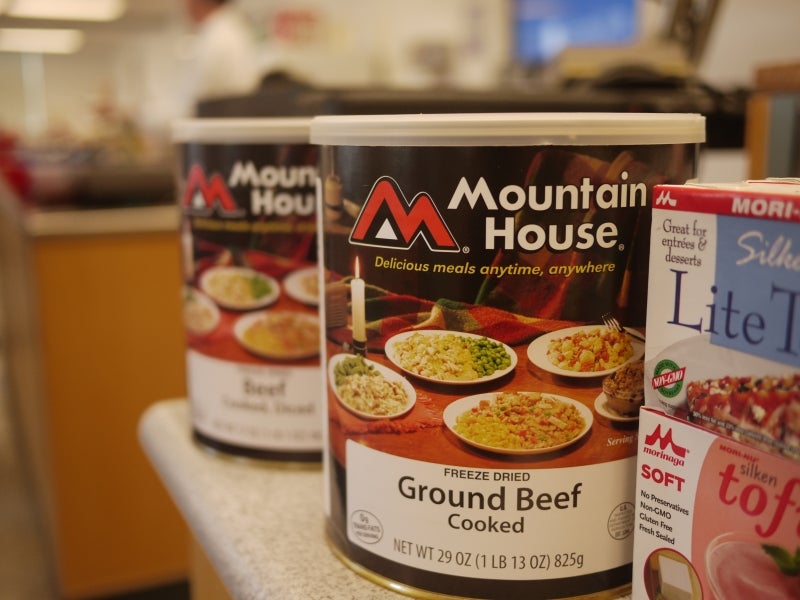 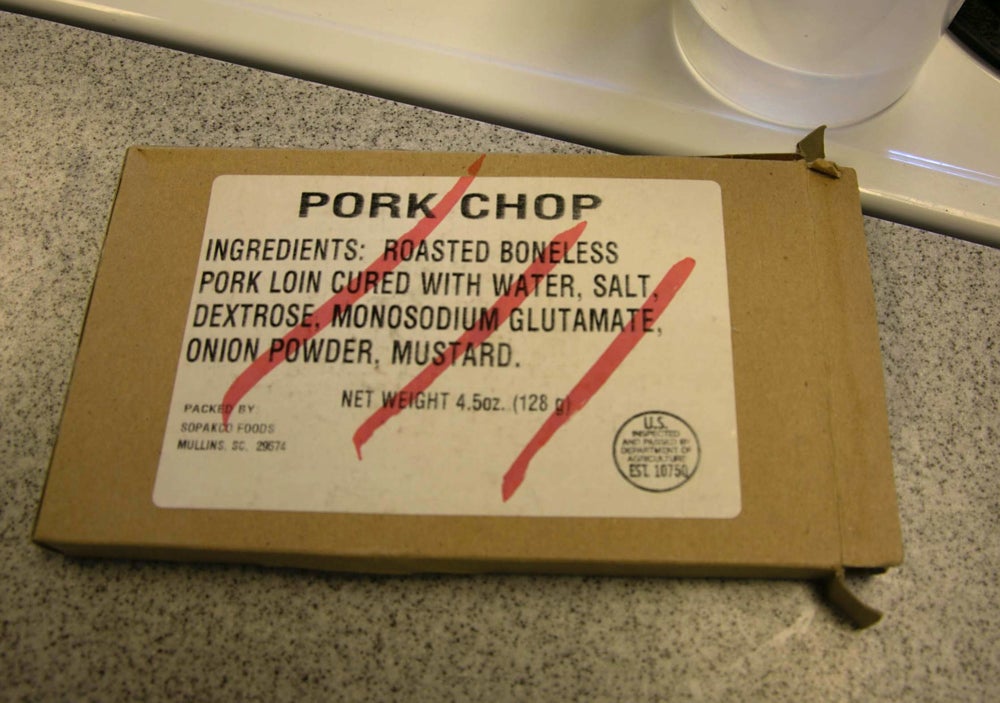 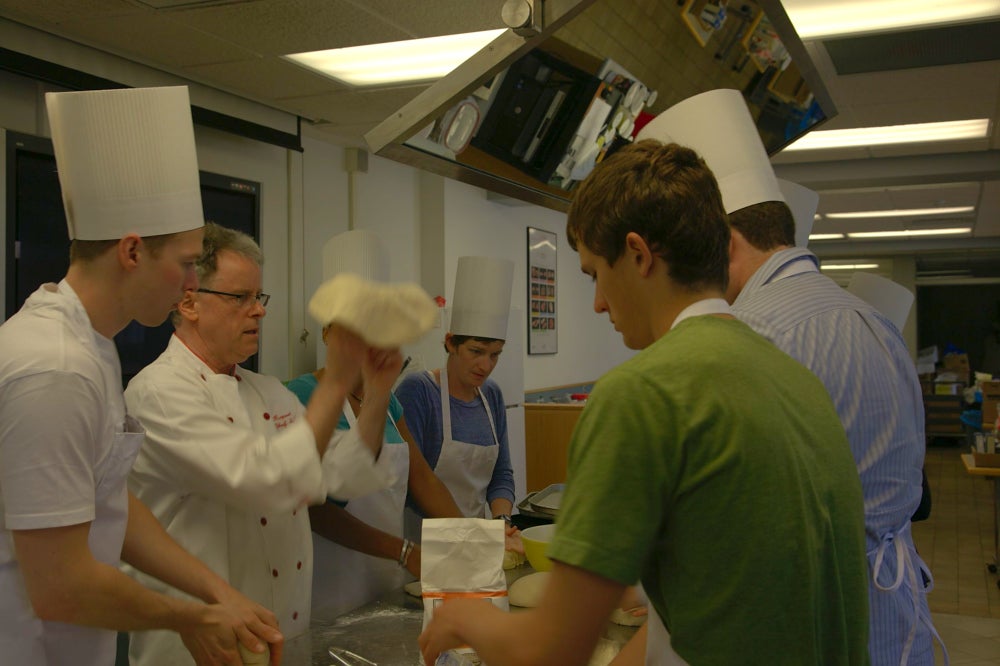 Rupert Spies Demonstrates How to Make a Pizza 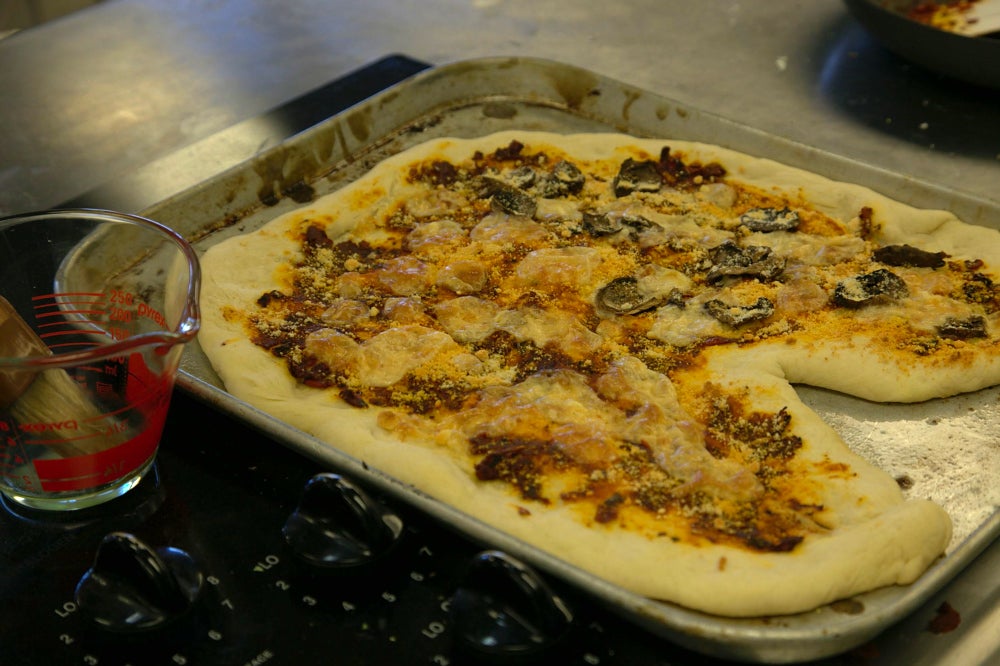 Space Pizza Emerges From the Oven 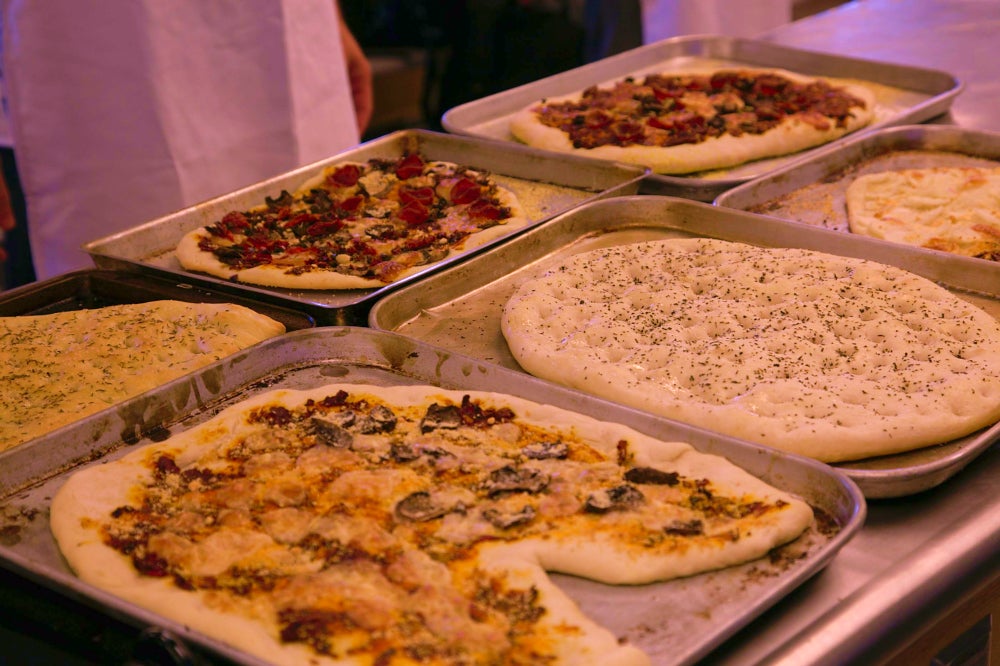 An Array of Space Pizzas 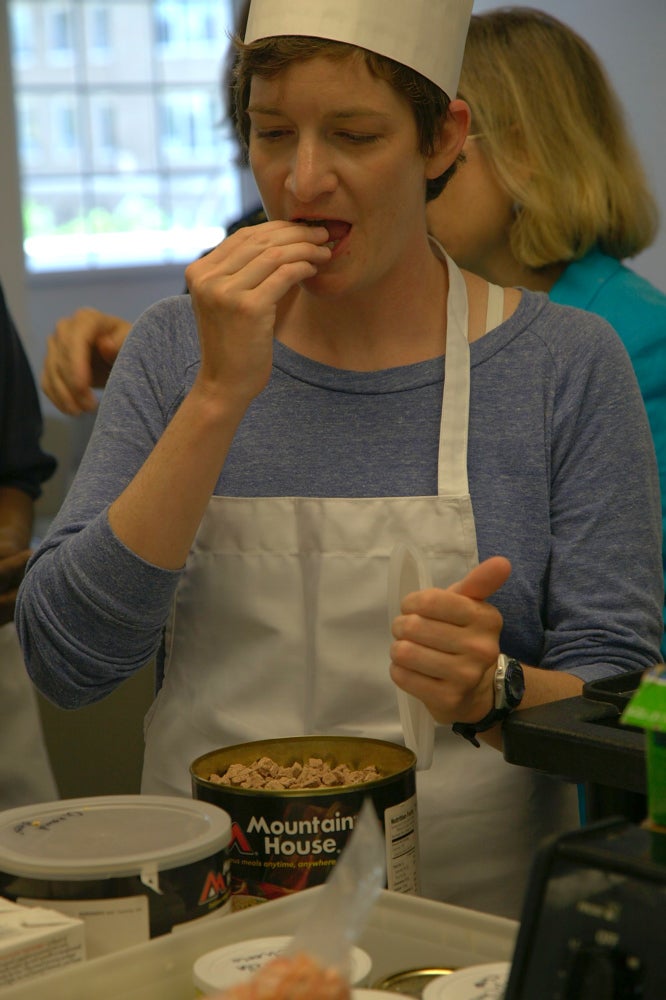 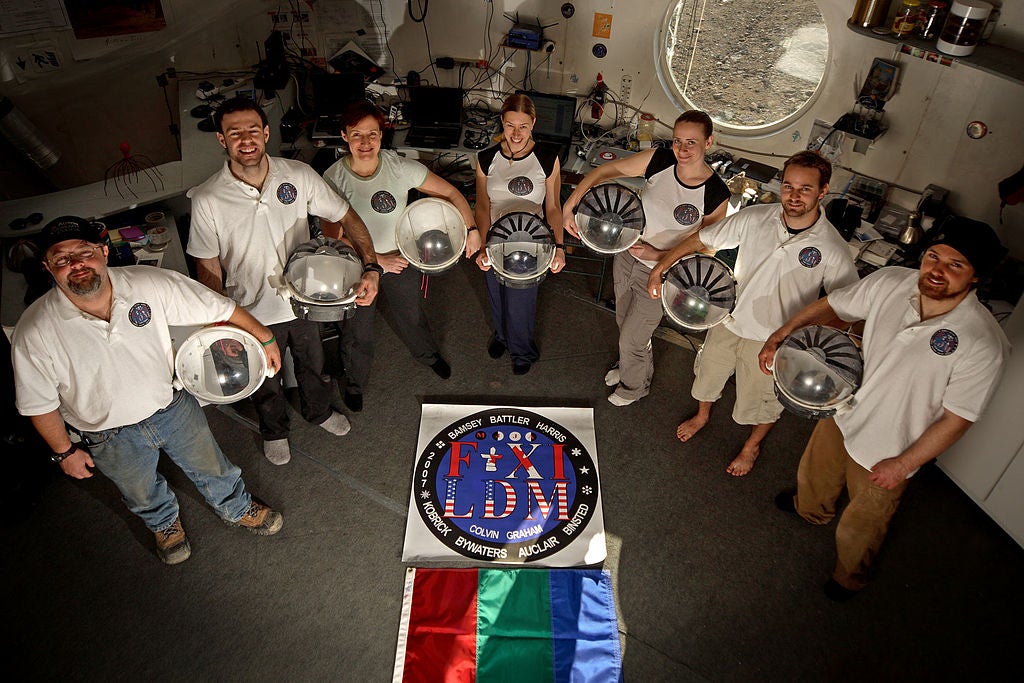 The FMARS 2007 Crew In Their Habitat