An Aerial Drone That Could Recon the Skies Over Titan

Drones: they’re not just for controversial cross-border airstrikes anymore. Physicist Jason Barnes has designed a robotic aircraft that could cruise... 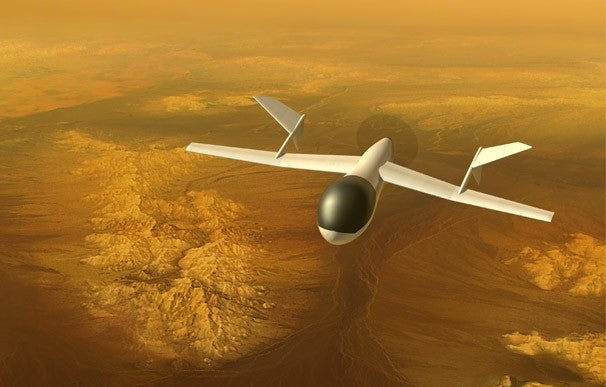 Drones: they’re not just for controversial cross-border airstrikes anymore. Physicist Jason Barnes has designed a robotic aircraft that could cruise the methane skies of Saturn’s moon Titan almost indefinitely, beaming data and images back to Earth and terminating with extreme prejudice any terrorist threats it encounters there (we made that last part up).

AVIATR is Barnes’s concept for an aerial drone powered by two small nuclear generators (known as Advanced Stirling Radioisotope Generators, or ASRGs) that could stay airborne over Titan pretty much indefinitely. The ASRGs together would only provide about 250 watts, or enough to power two light bulbs. But Titan makes flying easy and non-energy-intensive–it exerts seven times less gravity than Earth and hosts an atmosphere that’s three times denser.

In fact, the most energy-intensive task AVIATR would face is beaming information back to Earth. To do so, the drone would climb to nearly 9 miles up, then divert all of its power to its datalink while gliding back down to 2 miles. Scientific data would include imagery captured from both high and low altitudes and information on the methane rains that shower Titan’s surface, as well as other atmospheric data.

On such a mission, the drone would enter Titan’s airspace in an aeroshell with a parachute that would slow the entire package way down. AVIATR would then eject from the aeroshell, fire up its ASRGs and propeller, and deploy on what would likely be a one-year mission–though, as noted above, AVIATR could really stay aloft for years upon years barring mechanical failure of some kind.

Plus, it could provide strategic air support for the boats deployed on Titan’s methane lakes. That is, if either boat or plane ever makes it off the ground here on Earth. Titan is one of the more interesting bodies in the solar system (says me), but it didn’t get a nod from the Planetary Science Decadal Survey, which helps NASA prioritize its missions. That means if AVIATR does launch, it likely won’t be before the late 2020s.