What Happened to Apollos 2 and 3?

Things were looking good for NASA at the beginning of 1966. The Gemini program was halfway done and well on... 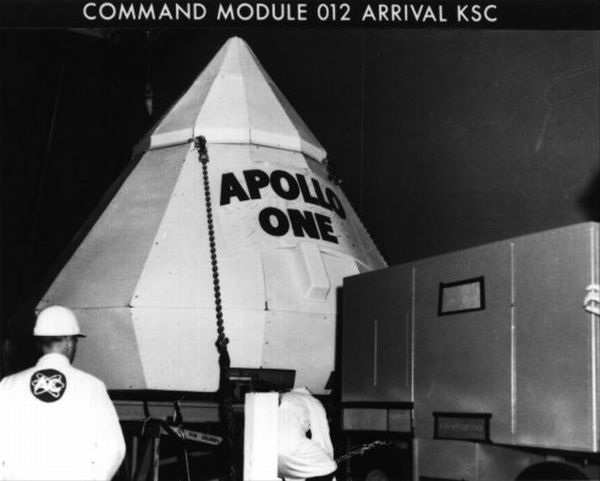 Things were looking good for NASA at the beginning of 1966. The Gemini program was halfway done and well on track to accomplish all the major program goals by the end of the year, and Apollo was in the pipeline on track to begin manned missions early in 1967. And flights in support of Apollo’s lunar goal were well underway by this point.

Tests of the Saturn I rocket and flights of boilerplate Apollo Command Modules (CSM) had begun in 1961. And from the start NASA had been using a straightforward and self-evident naming scheme: a letter denoting the rocket and payload and number standing for the rocket type and launch number. There were ten Saturn I launches designated by “S” or “AS” followed by a number from 100 to 110. The 100-series numbers were reserved for the Saturn I rocket, so AS-101 would be the first Saturn I launch. Five Little Joe launched tests of the CSM were noted by “A” followed by a number from 1 to 4; the first was an unnumbered qualification flight. Getting closer to manned missions were the more advanced Saturn IB launches. These missions were designated “AS” for Apollo-Saturn followed by a number beginning with 201, the 200-series numbers were reserved for the Saturn IB rocket. 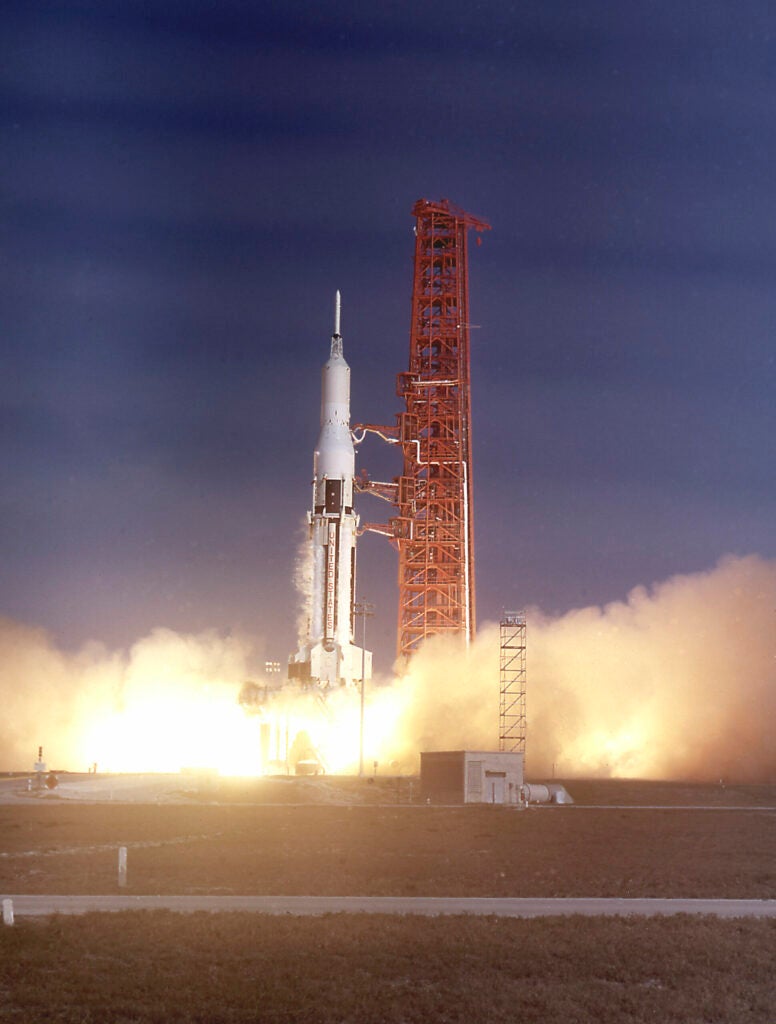 When NASA received the spacecraft for AS-204, spacecraft 012, at the Kennedy Space Center on August 26, 1966, it was protected by a cover emblazoned with “Apollo One” in capital letters. The mission was colloquially known as Apollo 1; the crew even had agency approval for a mission patch paying homage to the flight’s foremost position among manned missions.

Following this first manned flight would be Apollo 2 was, a duplicate of the Apollo 1 mission to give NASA a chance to test or revisit anything the first crew might have missed. Apollo 3 would debut the advanced Block II CSM, the lunar mission-capable version of the spacecraft designed to dock with the Lunar Module and create a tunnel through which astronauts could transfer between vehicles.

But it wasn’t long before this plan fell out of favour. With spacecraft 014, the spacecraft for Apollo 2, falling badly behind, many started questioning the value of flying a second Block I mission. There wasn’t too much the agency could learn from a Block I flight that it could then apply to the Moon-bound Block II missions. Besides, NASA had long abandoned the practice of duplicating missions; not since Gus Grissom followed in Al Shepard’s suborbital contrails in 1961 had NASA duplicated a mission. Not long after Gemini 12 splashed down on November 15, 1966, George Mueller of the Office of Manned Spaceflight cancelled Apollo 2. The missions were reorganized so Apollo 2 would debut the Lunar Module while Apollo 3, a high Earth orbit mission with both the CSM and LM, would be the first manned Saturn V launch.

This was the standing order for Apollo missions, all with assigned crews in training, in January of 1967. Then NASA was struck with its first major setback. During a pre-launch test, a fire ripped through spacecraft 012 and killed the Apollo 1 crew.

The ensuing accident investigation had widespread effects. It revealed shoddy workmanship found flaws in management practices, and underscored discrepancies in the spacecraft’s overall design. The review board recommended dozens of changes be made to make the spacecraft safer going forward, meaning NASA and the CSM contractor North American Aviation were facing a substantial redesign. A congressional inquiry ended with Apollo Spacecraft Program Office manager Joe Shea leaving the agency. NASA managers became increasingly cautious right at the time they needed to take big risks to meet the end of decade lunar landing goal.

The fire also forced Apollo management to reconsider whether it was worth rescheduling the Apollo 1 Block I shakedown flight at all. With so many changes pending, it hardly seemed worth flying the version of the spacecraft that wouldn’t be going to the Moon. While the Apollo 1 investigation wore on, the structure of the whole lunar program was called into question.

By the end of April, the charred spacecraft 012 had been disassembled to find the root of the accident and the pieces of Apollo were slowly coming back together. The decision was made to cancel all manned Block I flights. And with the Lunar Module still behind schedule, Apollo would start with an Earth orbital Block II CSM only flight followed, possibly, by a lunar orbital CSM flight. 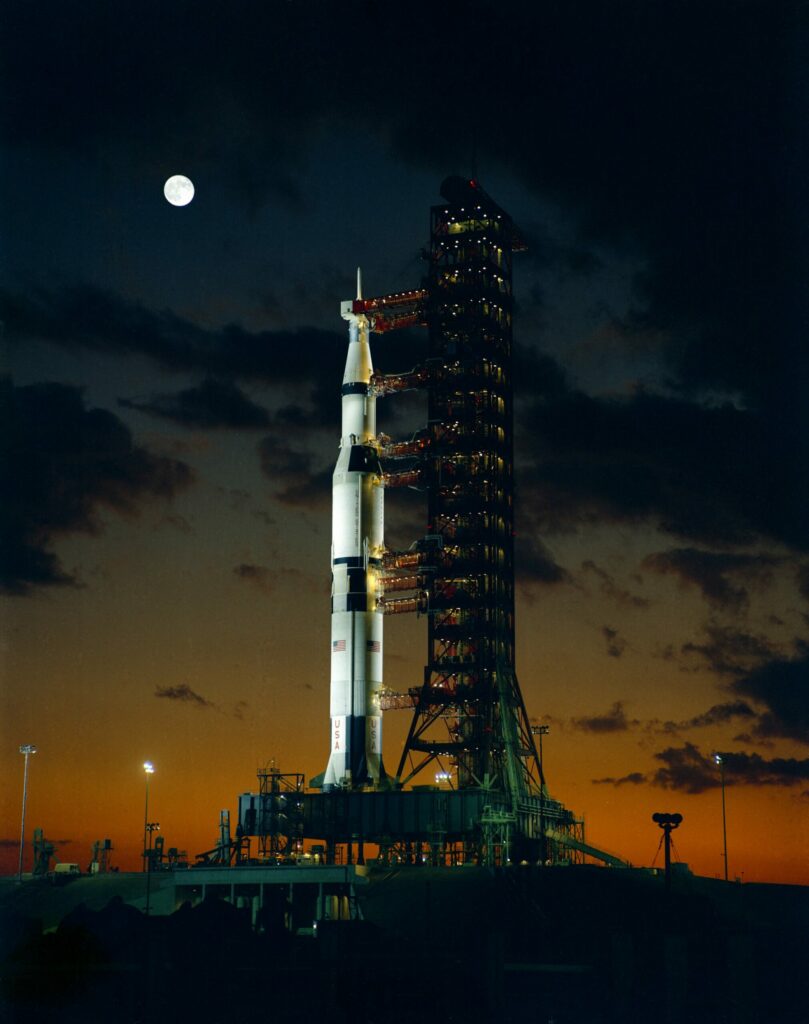 Apollo 4 on the launch pad.

It was at this time that the agency also made a decision about how to name its Apollo missions. The widows of the Apollo 1 crew asked that NASA retire the mission designation in honour of their husbands so they might keep the flight they never got to fly. NASA, of course, agreed. Continuing this naming scheme, there were two options, both of which Mueller outlined in a letter to Deputy Director of the Manned Spaceflight Centre George Low. The agency could proceed in sequence and name the first mission after the fire Apollo 2, or it could count the unmanned Saturn IB test flights as part of the Apollo series and retroactively rename them to have Apollo designations. AS-201 would become Apollo 1-A, AS-202 would become Apollo 2, and Apollo 203 would become Apollo 3. This meant subsequent flights following the fire would begin with Apollo 4.

On April 24, 1967, NASA’s Office of Manned Spaceflight announced that AS-204 would officially be recorded as Apollo 1. AS-201, AS-202, and AS-203 wouldn’t be renumbered in the Apollo series, but subsequent missions would be named beginning with Apollo 4.

The final three unmanned Apollo flights aren’t well known. Apollo 4 launch on November 9, 1967. It’s alternative designation of AS-501 reveals it as the first flight of the 500-series Saturn V rockets and the first flight of a modified Block II CSM. Apollo 5 used the same Saturn IB booster intended for the Apollo 1 mission, so was known internally by the same desgination: AS-204. An alternative notation of SA-204/LM-1 speaks to the flight’s role as the debut mission of the Lunar Module. Apollo 5’s main goal was to test the LM’s ascent and descent engines, a specific enough goal that the spacecraft flew without its legs. Apollo 6, internally AS-502, was another Saturn V test flight with a modified Block II CSM and a Lunar Module Test Article.

Apollo 7, AS-205, was the first manned Apollo mission. The first fully functioning Block II CSM was launched on a Saturn IB into Earth orbit. This mission did in October of 1968 what Apollo 1 set out to do in February of 1967. It was the flight that got Apollo back on track, and the familiar, steady sequence of missions from this point on recalls the program’s success.