BigPic: A Rare And Spectacular View Of Saturn

NASA's Cassini spacecraft captures a dark planet, wreathed in the sunlit glow of its rings. 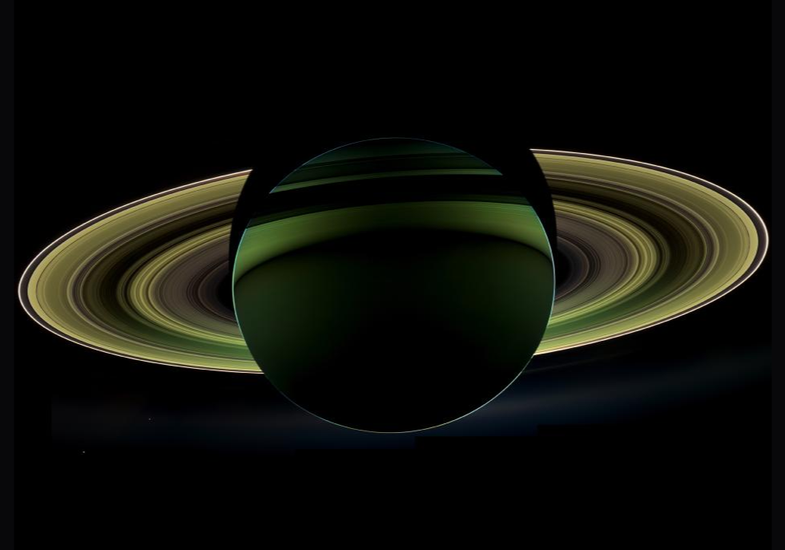 Cassini, the NASA spacecraft that has been orbiting Saturn since 2004, captured this spectacular portrait on October 17. In the image, the sun is positioned behind Saturn, backlighting the fragments of ice that make up its rings, while the planet itself–the side we can see, anyway–remains in darkness.

As it drifted through Saturn’s shadow on October 17, Cassini’s wide-angle camera took photos of portions of the planet using violet, visible, and infrared filters. Next, members of the Cassini imaging team overlaid the filtered images, adjusted their color, and stitched the separate pieces together into the mosaic you see here.

The sun, Saturn, and spacecraft all have to be positioned perfectly to allow for an image like this, and it’s only happened once before during Cassini’s mission. Such “high-phase viewing geometry,” as its called, not only makes for a pretty picture, but also allows scientists to study elements of the rings and atmosphere that they can’t see from other angles.

If you look closely, you can see two of Saturn’s moons, Enceladus and Tethys, to the left of the planet below the rings. Both appear as white dots against the darkness; Enceladus is the one closest to Saturn’s rings.