Stunning Video: A Series of Cassini Images Stitched into a Swirling Saturn-Scape

Fly by in high def 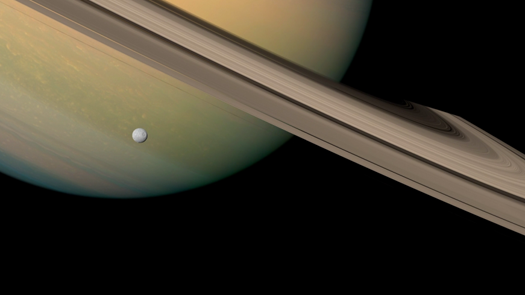 NASA’s Astronomy Picture of the Day usually serves up a stunning daily image of the cosmos, but today’s image is particularly spectacular because it’s not a single image at all, but rather a stream of Cassini images stitched into a sweeping video of a journey through Saturn’s neighborhood. The resulting video creates a Cassini’s-eye-view sensation, mimicking what it might feel like to fly a spacecraft around Saturn and its satellites.

The video is part of a larger IMAX project titled Outside In, and gathers imagery from Cassini’s orbits from 2007 through 2010 (the spacecraft made its initial approach in 2004). The images themselves have been digitally tweaked and manipulated to create the vid, but as the title screen proudly declares, there’s no CGI and no 3-D modeling. The images, in other words, are Cassini’s own. Enjoy.