How Realistic Is The Sci-Fi Space Thriller ‘Europa Report’?

We chat with Kevin Hand, an astrobiologist who consulted on the film, about realism in space thrillers, why actors are better than robots, and more. 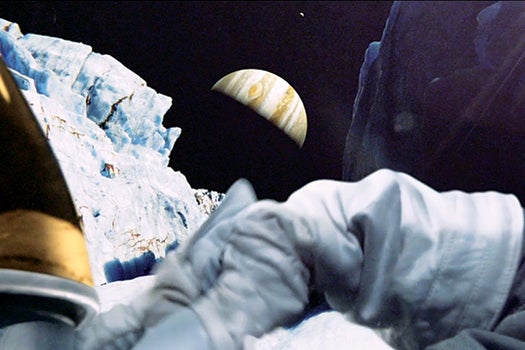 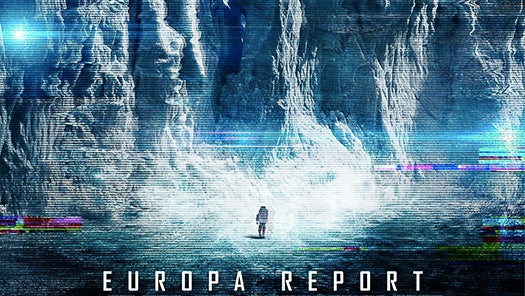 It’s rare that a great space movie breaks the Hollywood traditions of big budgets, blatant abuse of physics, over-the-top special effects, factitious characters, and hokey one-liners. Successfully straddling the line between fact and reality, as these space oddities strive to do, is extraordinarily difficult.

Stanley Kubrick and Arthur C. Clarke’s 2001: A Space Odyssey easily sets the highest standard in this department. However, we recently screened the new movie Europa Report, and were taken aback by its respect for audience intelligence while still offering a thrilling, edge-of-your-seat story [watch the trailer below]. It’s clear director Sebastián Cordero and writer Philip Gelatt did their science homework. Their characters behave like real people on a believable mission to search for life on Europa — an icy moon of Jupiter that astrobiologists yearn to explore.

Here, we pick the brain of Kevin Hand, an astrobiologist and expert on Europa at NASA’s Jet Propulsion laboratory in Pasadena, Calif., and one of the film’s volunteer science consultants, on how to create a truly realistic space film that won’t bore viewers to tears.

Spoiler alert: Key scenes and plot elements are mentioned here, so bookmark this article if you want to watch the movie first.

How and why did you get involved with Europa Report?

Through the Science & Entertainment Exchange. They connect moviemakers with scientists, catalyze those relationships, and, if one works, we go off on our own to consult.

The leadership and writing team for Europa Report was very keen on learning as much as they could about the moon. They wanted a compelling story that adhered to science to make it believable. They constantly emailed and called us to talk through ideas and see if they had gotten it right. To me it seemed refreshingly out of the ordinary.

Anyway, both myself and my colleague, Steve Vance, had a pretty heavy hand in making sure they got some of the big-picture brushstrokes correct. 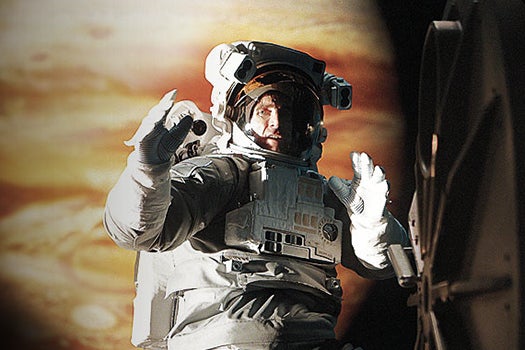 Astronaut Outside Europa One

What concerned you the most?

Something we talked about early on was the feasibility of getting humans to Europa. It’s an icy moon of Jupiter, and not a desirable place to be. The surface is incredibly cold and bathed in dangerous radiation — and it would take a very long time to get there. But it could still happen.

Filmmakers are always about putting the story first. We here at JPL think robots make great characters, but it often takes human actors to make a film work. So that was something I had to get over.

Once we got past getting to Europa, we played around with what it would be like on the surface. They listened to us, and I was quite impressed with the final product’s attention to detail, including, for example, how harsh the radiation environment is and how it’d manifest itself. They committed some errors here and there — a wrong turn of phrase or incorrect geological term — but overall, I was impressed.

Where does the nasty radiation come from?

The magnetic field of Jupiter has all of these electrons, protons, and ions stuck within it. So as Jupiter rotates, Europa is kind of like a slow jogger in a windy rainstorm. The wind — the magnetic field in this analogy — comes sweeping from behind and throws raindrops (the particles) on the back side of the jogger (Europa).

Jupiter has a 10-hour rotation and 3.5 Earth days for Europa, which makes the same face always showing to Jupiter. So the backside is always exposed to this intense electromagnetic radiation. The leading hemisphere, meanwhile, we think gets less radiation. Even on the front side, there’s a fair amount of radiation — broadly equivalent to Earth’s upper atmosphere during a solar storm, which is a pretty dangerous amount. They did get that right.

Each second on the surface, without any shielding, would be about the dose of a chest CT scan. Even with shielding, you would get severe radiation poisoning in about an hour that might be fatal. 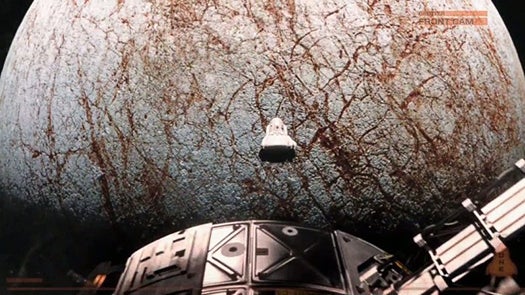 Landing on Europa is key to this movie. How good was their descent vehicle?

Well, the engineering sequence that they present is as well-fleshed out as any manned mission to Europa has ever been — and of course there haven’t been any. They had lot of creative license, considering a human mission to Europa is nowhere on the books.

The renderings of Europa’s surface certainly looked incredible, but I’m curious what you thought about them.

We worked in considerable depth with the artist both on the landing region and the small canyon in which they land. What they came up with was wonderful. I think they really gave the viewer a sense of what it’d be like to stand on surface of Europa.

My motivation here was to open up a window into this beautiful, fascinating world. That, to me, is the first step in getting an audience fascinated with a place like this, and reeling them into the possibility and excitement of exploring it — even though I think robots are a better way. It seems like such a small thing, but can have a big influence.

What science fiction influenced your career as an astrobiologist?

Definitely Close Encounters of the Third Kind. It had the dual effect of captivating and scaring the heck out of me as a young kid. And then of course the kinder, gentler ET came along and was a heavy influence on my boyhood fascination with extraterrestrial beings. The fascination with microbial life came later, once I gained a scientific appreciation for the variability of life.

The movie gets really interesting when they get close to a weak point in Europa’s icy crust. Do those actually exist?

We can’t be certain if Europa is still geologically active today, or has just been in the recent past. It could be that the fissures we see on the surface are relics from a million or 10 million years ago. We have no smoking gun like we do with Enceladus [a moon of Saturn]; it’s spraying water and other material into space, and the Cassini spacecraft flew through that and analyzed it. We don’t have anything like that for Europa.

One thing we do have is remote observations of surface chemistry. We think Europa is recombining salts from the ocean below with ions spewed out by its neighboring moon, Io. We also know that Europa’s surface has been active within the recent past — hundreds of thousands or millions of years ago. That is a short timeframe, geologically speaking. We think the surface of Europa is the same age as its seafloor, and few impact craters tell that story.

Still, we’ve only really had two spacecraft visit Europa, and barely: The Voyagers in the late 1970s and early 1980s, and Galileo, which launched in 1989 and orbited Jupiter and performed flybys. Here we are, in 2013, and we have yet to go back to Europa — even though it’s an incredibly compelling world in which to search for life beyond Earth. 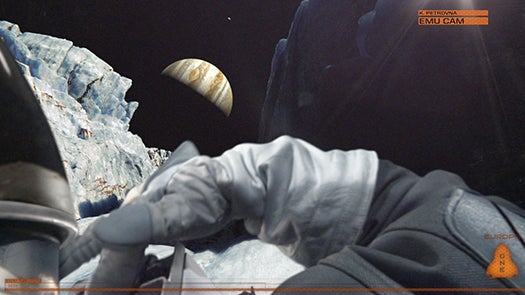 The Surface of Europa

There’s some of that search in the movie — a female scientist scoops up colored ice. What did you think of that sequence?

The sample she got was on the surface, and she determined it was living right away. We don’t expect to find anything alive on surface of Europa. The harsh cold and radiation make that a losing proposition. That’s not the way it’d happen. We could, however, find complex organic molecules or maybe dead, frozen life on the surface.

And what about the thing under the ice?

To have something that interesting right below the surface is not realistic. The filmmakers took some license with how thick the ice is. Our knowledge of the ice’s thickness is more of a global average, but it’s still a few kilometers to tens of kilometers thick.

That said, I liked how they ended it with just enough to intrigue you about what they found, but not go over the top with it all. I found the ending refreshing. That kind of discovery is my dream of dreams.

How would you rate the overall scientific accuracy of the movie?

There are a few mistakes here and there, but I have to say it’s well above average in terms of scientific accuracy. I love that this sort of documentary-from-the-future way of framing the movie. The Europa Report is singularly believable film, from the conflicts within and among characters, to the premise of the mission and what it might look like.

There’s a balance the writers and directors tried to achieve: They wanted enough realism to make it believable, but needed to advance the stories and characters to make the movie enjoyable. I thought they did a good job of developing characters you could get emotionally invested in. They were multidimensional, and I could identify with them. That’s hard to do.

At the end of the day, though, I’m just thrilled anyone is making a movie about Europa. It’s such a fascinating yet little-known world out there in our Solar System. I hope this movie brings a little bit of spotlight onto the moon.

The film premieres today in New York, and Popular Science will be on hand to moderate a panel with the filmmakers. Stay tuned on PopularScience.com for a video recap.