The survival of southern resident killer whales is inextricably tied to the health of Chinook salmon. 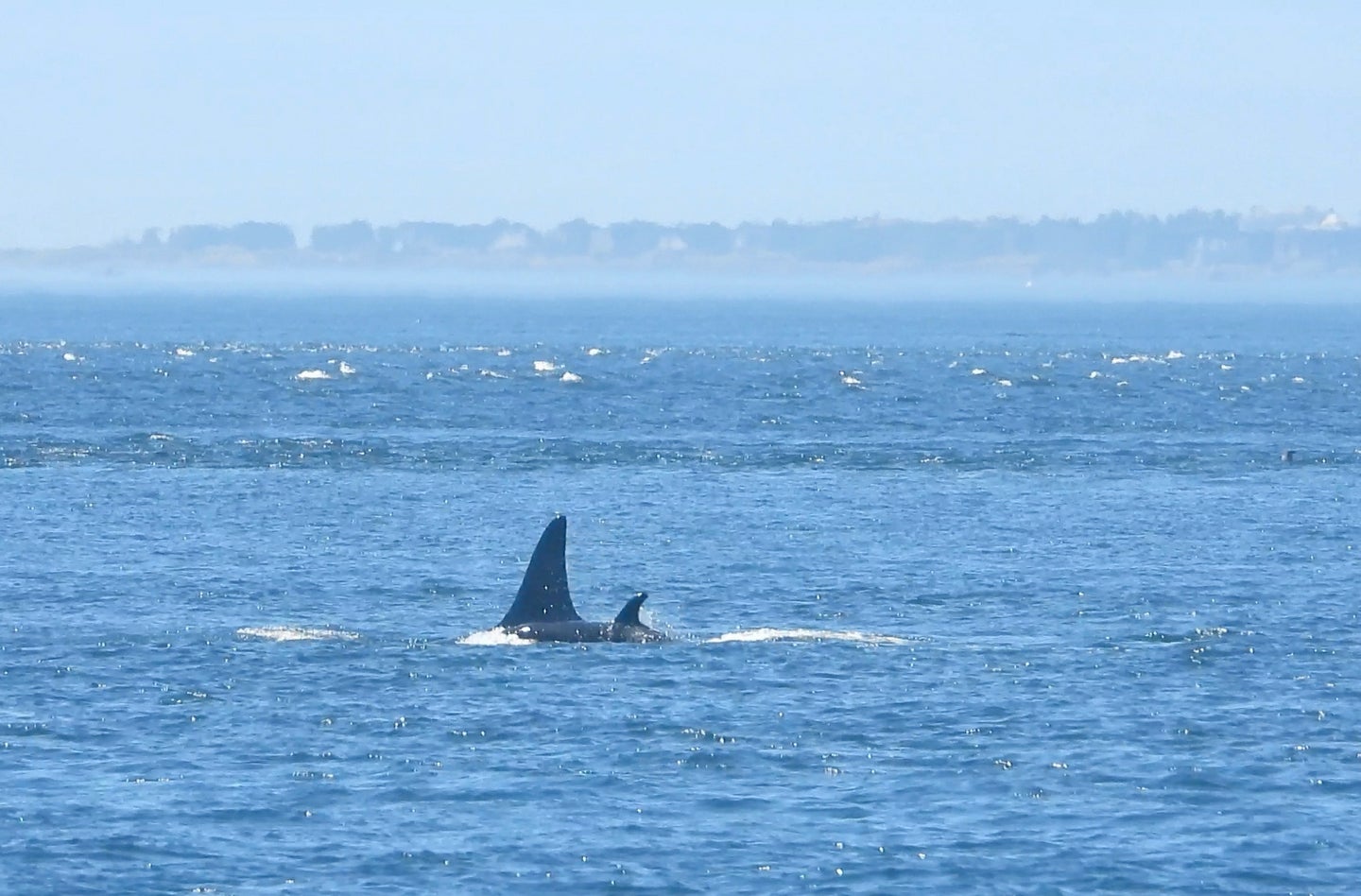 K-45, the new baby orca summering in the waters off Washington, with mother orca K-20. Both are part of the K-pod in the southern resident killer whale population, which has faced a number of hardships in recent years. Tamara Kelley/Orca Conservancy
SHARE

This summer, a baby killer whale is swimming with a local pod in the Salish Sea (the inland marine waters along Washington state and British Columbia) for the first time since 2011. The newest little whale’s birth into the K-pod, one of three family groups that make up the southern resident killer whales, is cause for celebration in a population that’s been struggling for decades.

But the calf isn’t enough on her own to ease the worries of researchers and conservation groups about the southern resident killer whales, as the genetically distinct sub-group of the species in those waterways is called. For one thing, the initial year will be the most difficult for the calf to survive. And health markers like stress hormone levels and body weight across the orca population suggest successful births are increasingly a rarity.

“[The new calf] is so miraculous,” Deborah Giles, the Science and Research Director for the Washington-based  group Wild Orca, says. “But we know from past decades these females were able to give birth every three years, and that’s just not the case now.”

In 2017, Giles’ team found that 69 percent of southern resident female whales’ pregnancies haven’t been brought to term in recent years. Chronically stressed and undernourished, this killer whale population has shrunk from 89 individuals when they were federally listed as endangered in 2005 to only 74 today.

The killer whales face the same range of threats they did 17 years ago: noise and potential collision with boats, chemical pollutants, and a lack of prey. Of all those, most worrying to researchers today is the shortage of the orca’s main food source, Chinook salmon.

These killer whales co-evolved with the Chinook, which are also an endangered species. They can and do eat other types of fish, but the Salish Sea’s largest, fattiest fish has always made up the majority of their diet.

As the number and size of salmon returning to spawn in Washington and British Columbia’s rivers have dwindled over the years thanks to overfishing, rising water temperatures, dam obstructions, and habitat destruction, among other things, the killer whales have struggled to find enough prey to survive.

“They’re starving all the time because there’s just not enough fish out there,” says Giles.

Another recent study of the southern resident killer whales by researchers at the University of British Columbia identified the same issue. Comparing salmon availability over the decades to what they know of the whale’s movements and health, they determined that for six of the last 40 years, the marine mammals weren’t getting enough to eat.

That means that any effort to protect the endangered southern resident killer whales will have to involve protecting the endangered Chinook salmon. “The single most promising effort toward promoting a positive trajectory for southern resident killer whale recovery are salmon and river restoration initiatives throughout the whales’ entire range,” says Shari Tarantino, executive director of the Washington-based nonprofit Orca Conservancy.

[Related: The secret to saving salmon is lodged in their ears]

The state put new regulations in place for this summer requiring whale watching boats keep a nautical half mile away from the orcas, following news that a number of them were pregnant, but potentially unhealthy. While these additional restrictions should benefit the whales, Giles from Wild Orca says they won’t do enough on their own to help them recover long-term. “We have spent a lot of time looking at vessel effects to limit the impact of vessels on these animals. Now, we need to be looking at policies focusing on fisheries management,” she says.

Tarantino, from the Orca Conservancy, agrees. “While we support mitigation efforts, the emergency regulations in Washington State continue to fall short on what the southern resident killer whale population needs,” she adds.

And it’s about more than just the orcas. Killer whales are at the top of the food chain, and, as Tarantino points out, “When an apex predator is failing, it means the entire ecosystem beneath it is also failing, which ultimately will affect the human population.”