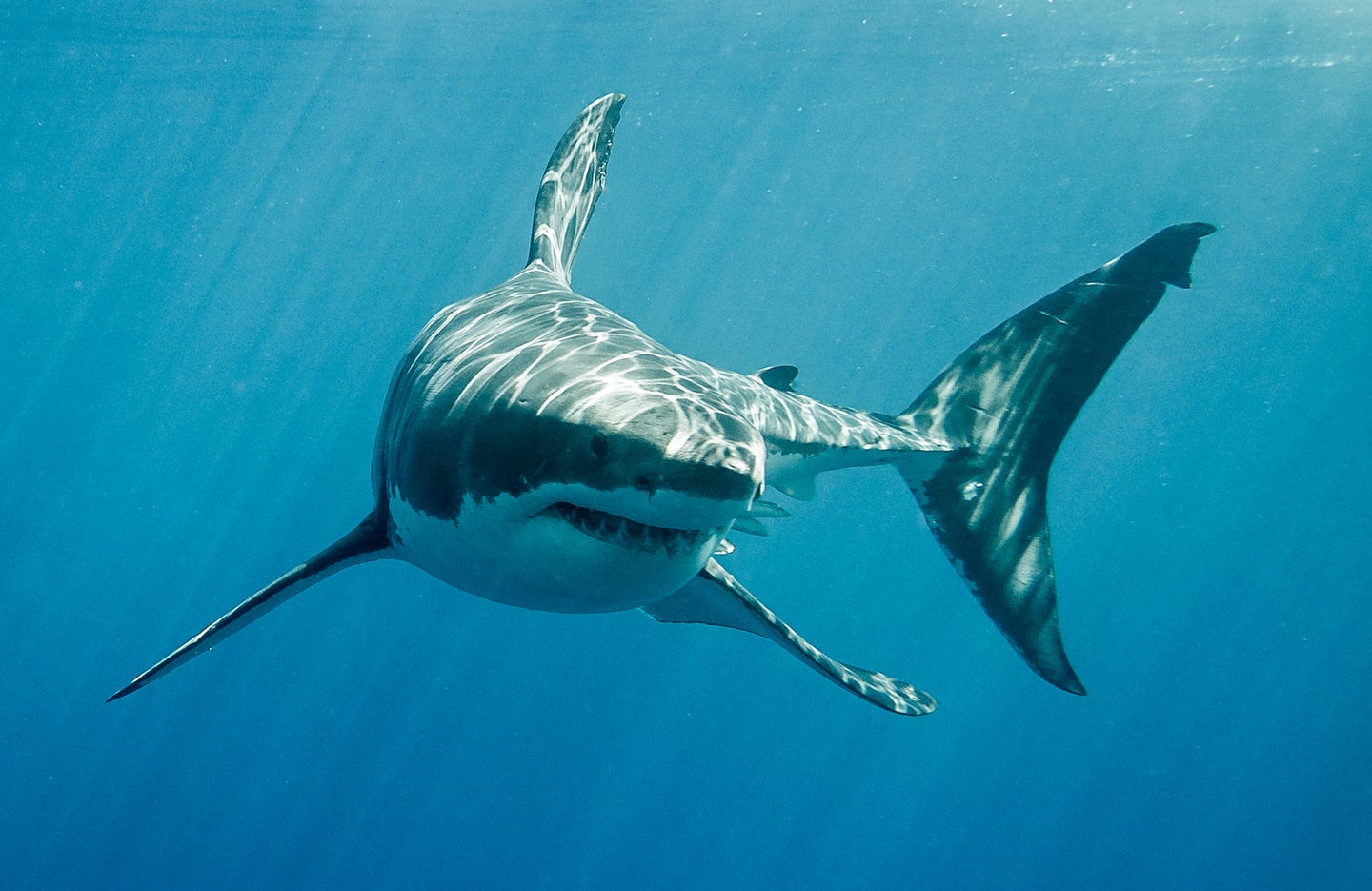 Great white sharks are the epitome of an apex predator. In the ocean, these toothy creatures easily hold one of the top spots on the food chain (though the odds of one killing a human are 1 in 3,700,000). But recent drone and helicopter footage of an aquatic attack reveals that another marine mammal seems to have an upper hand.

For the first time, biologists filmed direct evidence of killer whales attacking and killing white sharks in South Africa. The first video was captured by drone in May 2022 in the Mossel Bay region, revealing three orcas cornering and fatally biting a three meter-length white shark. The shark’s body was not seen or recovered after the bloody battle. This video, along with extended helicopter footage of this attack and shark tag data, were published this week in the journal Ecology.

The first video recorded by a drone pilot was initially released in June, but the team later received cell phone footage recorded from a helicopter pilot that had been filmed on the same day. They were able to identify that the killer whales in the helicopter video were the same ones in the drone pilot video—spotting a particularly well-known shark hunter, named Starboard. The evidence suggests that the pod had gone on an hour-long hunting spree, killing potentially four white sharks in total. The researchers decided to adjust and resubmit the paper with the new information. This provides new insight into the rarely-seen evasive behavior of great whites—a species that had once dominated South African waters but is now experiencing a rapid decline.

“I still remember viewing the footage for the first time and feeling a whole mixed bag of emotions,” Alison Towner, lead study author and senior shark scientist at Marine Dynamic Academy in Gansbaai, South Africa, told PopSci in an email. “We had been analyzing evidence on these interactions since 2017 and had often been challenged on whether this really was occurring in South Africa. I guess the footage put those questions to bed as it is irrefutable evidence that orcas are hunting white sharks here.”

Orcas are like “wolves of the ocean,” says Towner—they commonly capture prey in organized pods. In two of the recorded attacks, the team was able to witness the killer whales slowly and closely approach sharks. Instead of fleeing, the great white will swim in tight circles around the orca while keeping it within sight—sharks being highly visual creatures. This is a common strategy that seals and turtles also use to successfully evade sharks, explains Towner. But since killer whales hunt in groups, the tactic might not be as effective.

“I was in awe of how the orcas strategize and hunt but one cannot help but feel for the sharks, too,” Towner says. “It’s quite haunting seeing white sharks being circled and killed by larger predators.”

Particularly, the orcas seem to have a taste for liver. The video shows them chomping on the sharks’ abdomen and tearing out their liver, which could be seen floating to the surface where the killer whale gobbles it up. White sharks’ livers are oily and nutrient-rich, making an ideal meal, Towner explains. The footage gives an explanation for previous shark carcasses washed ashore that were missing livers, the team wrote in the study.

This might actually be a relatively common phenomenon. Killer whales are the only known marine predator of great white sharks. In South Africa, Starboard, and partner-in-crime Port, have been reported preying on other shark species and have been linked to white shark deaths since around 2017, but this is the first time the showdown was seen in action. Before killer whales started hunting in Mossel Bay, white sharks were frequently seen—sometimes recorded every day by research surveys. The study authors collected drone and dive boat data before and after the predation events, and found that white sharks fled the area immediately after the attacks. Only a single white shark was seen in 45 days after the predations were reported.

“Killer whales are highly intelligent and social animals,” marine mammal specialist and study co-author Simon Elwen said in a press release. They are known to learn and pick up behaviors or skills from each other in their unique cultural system.

If the hunting practice spreads among killer whales over time, it might be tough to be a shark in South African waters. Orcas are already pushing great whites out of Gansbaai, a fishing town east of Cape Town that’s popular for shark tourism. Human-caused climate change and fishery activity have already been linked to the decline of shark populations, Towner explains. Orcas pose an additional pressure into the mix, motivating Towner and researchers to closely monitor shark and orca dynamics, and the potential influences it might have on South Africa’s ocean ecosystem.

“While these interactions may be fascinating it is important to understand that white sharks face a whole host of threats in South Africa and now orcas are an additional threat to their already fragile populations,” Towner says. “This information will need to be considered in future studies and in management moving forward here in South Africa.”