Minimizing offshore wind’s impact on nature is tricky, but not impossible

Renewable energy is a must. So is protecting marine life. 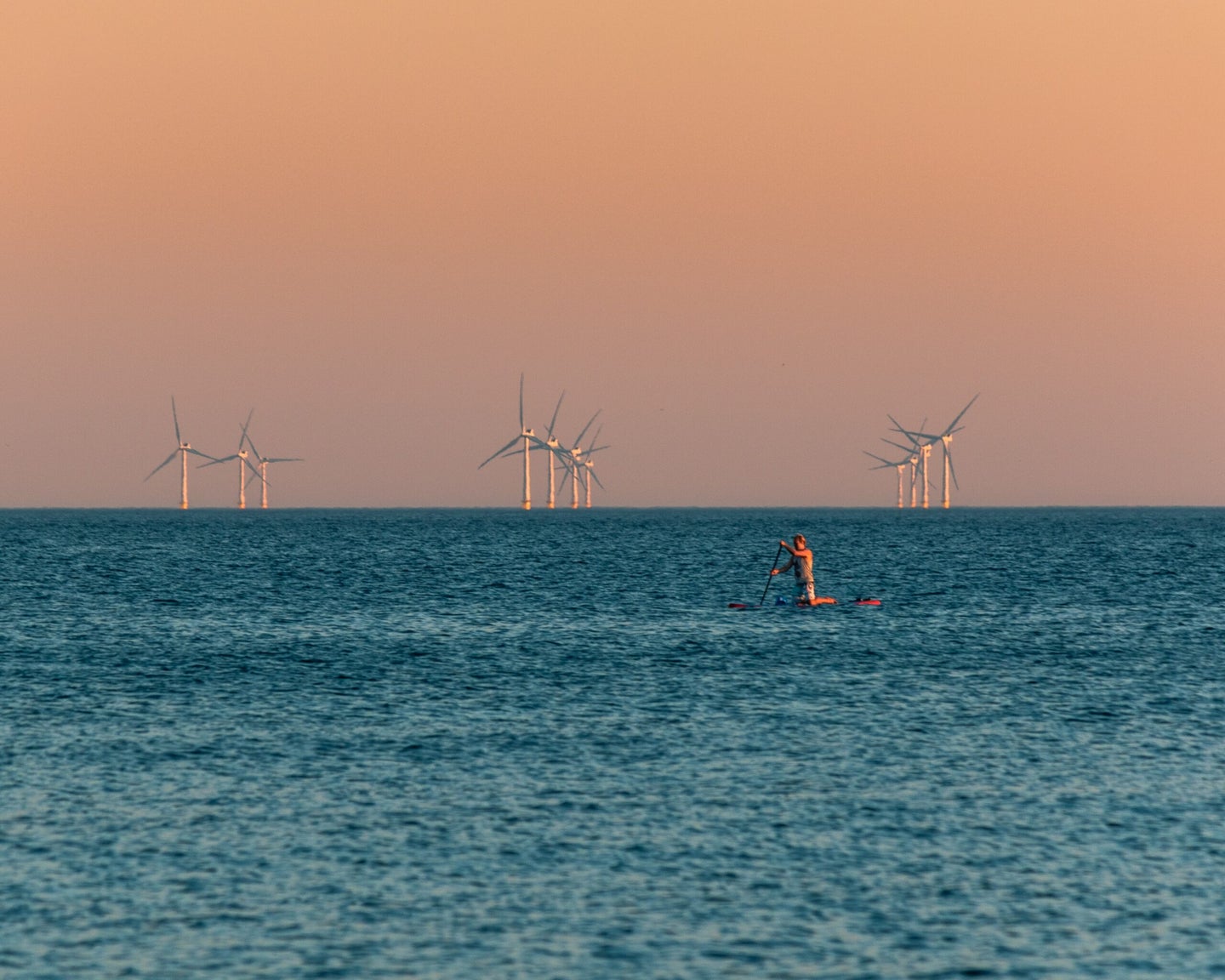 Building wind farms on the Atlantic and Mediterranean can be quite tricky. Reegan Fraser on Unsplash
SHARE

The National Renewable Energy Laboratory estimates that even if one percent of offshore wind energy’s potential is recovered in the US, it could power around 6.5 million homes. Currently, the country has only one operational commercial offshore wind farm off the coast of Rhode Island. The Block Island Wind Farm produces 30 megawatts of electricity after beginning with commercial operations in late 2016. But the Biden Administration aims to have 20 percent wind energy by 2030 that will generate 300 gigawatts of power (one gigawatt is sufficient to power around 750,000 homes).

The federal government is now proactively investing in offshore wind farms to install in five states across the East Coast over the next decade. The decarbonization of the electricity grid is vital for reducing greenhouse gas emissions. Still, the next big challenge for wind energy is ensuring farms are environmentally sustainable by reducing and mitigating any negative impacts on marine ecosystems.

Scientists predominantly conducted the existing research on the environmental impacts of offshore wind farms in Northern Europe, where offshore turbines started operating in 1991. “But the impacts are not the same in the Mediterranean region and the US as compared to the North Sea,” says Josep Lloret Romañach, a marine biologist and professor at the University of Girona.

The North Sea stretches between Great Britain, Norway, Denmark, Germany, the Netherlands, Belgium, and France. Its continental shelf—or the edge of a continent that lies under the ocean—is far longer and broader than the Mediterranean and North American continental shelf, explains Romañach. He adds that a smaller continental shelf means builders must put turbines closer to shorelines.

“That is when there is a conflict with marine conservation issues,” he says.

In a 2022 study published in the journal Science of the Total Environment, Romañach and colleagues analyzed the potential environmental impacts of a proposed large-scale offshore wind farm project in Cap de Creus, a peninsula located in Catalonia, and the Gulf of Roses in Spain. Eight marine protected areas surround these regions. They found that the offshore wind farm, which will involve constructing 80 turbines taller than the Statue of Liberty, will significantly impact the seafloor in a way that Northern Europe has generally avoided.

“The North Sea’s bed is mostly muddy. But in other parts of the world, there is a lot of marine biodiversity including seagrass and deep-water corals that could get damaged during the construction and operation phases,” he says. “Policymakers need to consider these particularities that make diverse marine habitats highly sensitive to human pressures.”

The wind farm, which might be operational in 2026, will have innovative floating turbines for use in the deep waters of the Mediterranean Sea. These floating structures will be held in place with long cables and chains. The anchorage systems will hold the cables and chains tightly to the seafloor. “These floating wind farms require huge mooring and anchorage systems that can affect the integrity of the seafloors. Marine mammals might collide or can get tangled up in the wires,” he adds.

The underwater noise caused by wind farms during the construction phases accumulates with other sounds from human activities—such as sailing and oil drilling —and affects the behavior of marine mammals. Sharks, rays, dolphins, whales, and other mammals use electromagnetic waves to traverse the sea and hunt their prey. These activities get disrupted, especially during the installation of massive wind turbines.

Moreover, these floating platforms are also attractive for invasive species that might alter the fragile balance of a marine ecosystem, explains Romañach. An increase in activities during offshore wind farms’ installation and maintenance phases means non-native marine species can appear from incoming vessels. Vessels are well-known carriers of non-native species through water exchange and hull fouling (accumulation of marine growth reduces vessel speed).

Non-native species, like the Rhopilema nomadica jellyfish, are highly opportunistic by nature and ruthlessly infiltrate local marine habitats. They constitute a significant threat to marine biodiversity and cause significant ecological and economic losses for local fishing communities as soon as they become invasive. “This affects the entire trophic chain of a marine ecosystem from the surface of the sea to the bottom,” says Romañach.

“​The United States is in a very similar situation as the Mediterranean regions. A lot of large-scale wind farm projects with floating turbines are being funded in the US with little knowledge about their local impacts,” he adds.

How can we protect marine ecosystems?

Despite all the doom and gloom, researchers have found that offshore wind turbines can act as artificial reefs under the right circumstances. In Virginia Beach’s pilot offshore wind project in 2020, locals observed that the turbines’ steel foundations had become a habitat for algae and mussels. The foundations attracted schools of fish such as Mahi, baitfish, and sea bass.

“In parts of the sea with degraded habitats, wind turbines help to provide more biodiversity. For example, in the North Sea, some areas suffered from overfishing because of the use of bottom trawlers. The offshore wind turbines helped restore [these ecosystems],” explains Romañach.

But for marine habitats that already have coral reefs and other forms of biodiversity, he warns that a wind farm’s impact could do more harm than good.

“We are afraid that energy companies will be tempted to pursue marine protected areas where fishing is banned because the rest of the sea is already crowded with other commercial activities. The artificial reef effect will not work in marine biodiversity hotspots,” he further warned.

While carefully assessing which areas of the sea are better suited for offshore wind farms can help, researchers say quiet technologies can also mitigate and minimize the adverse impacts of underwater noise on fragile marine ecosystems.

During the construction phase, the percussive piling of foundations into the seabed can be particularly noisy, says Jakob Tougaard, a professor and senior marine mammal researcher at Aarhus University.

An effective mitigation measure is air bubble curtains, he adds. This technology includes a perforated hose placed around the construction site on the seabed. It creates a thick curtain of air bubbles generated by compressed air, increasing the density of the water and muffling construction noises.

To protect the critically endangered North Atlantic right whales, the Biden administration recently announced a multi-agency initiative for making offshore wind activities environmentally friendly. Some measures include limiting vessel speeds for all construction and operation at 10 knots or below.

Francine Kershaw, a senior scientist at the National Resources Defense Council, also recommended gravity-based foundations as another mitigation measure in her blog. The turbines’ foundations do not need to be hammered into the seafloor—giant concrete blocks placed at the bottom of the sea can do the trick as well. This technology is already in place in offshore wind farms in Sweden, Denmark, Belgium, and Germany.

But Romañach warns that mitigation measures might not be adequate for protecting marine habitats, which naturally fend off climate change through “blue carbon,” says Romañach. “Offshore wind farms are also effective for climate change mitigation, but if they damage marine protected areas or biodiversity hotspots, most of their benefits will be lost in the long run.”