Manmade pollutants could be harming marine mammals more than we think

A new study found toxic chemicals in whales and dolphins. 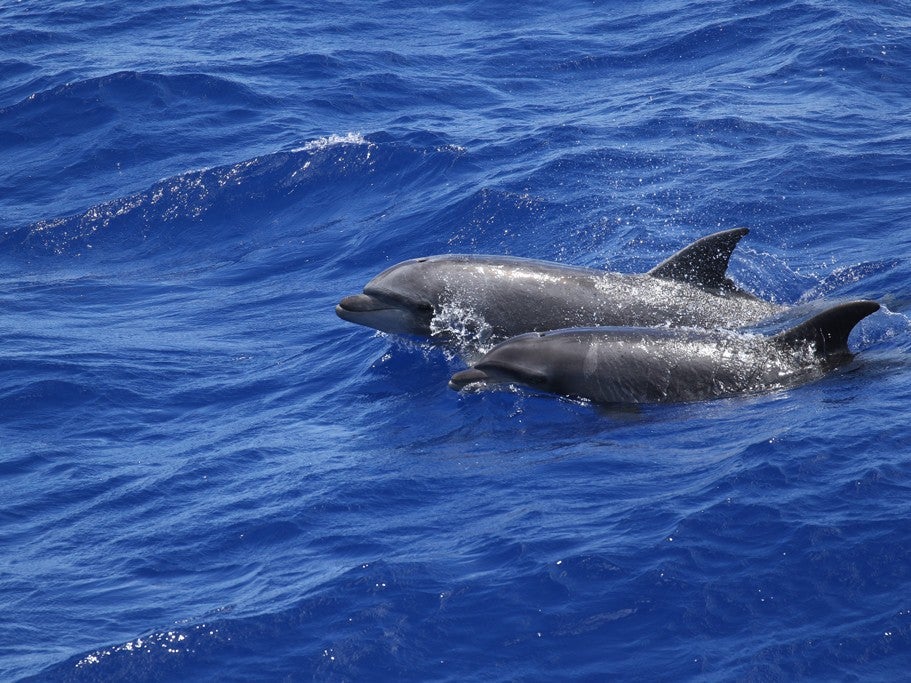 Researchers identified multiple bottlenose dolphins with high levels of mercury in their livers. Marine scientists are only beginning to understand the relationship between ocean pollutants and sea animals' health. NOAA/Amy Van Cise
SHARE

Marine biologists have been sounding the alarm about ocean pollution since the 1950s. Up until then, many scientists believed that the ocean was large enough to dilute any human waste and protect its animal inhabitants. Over the past few decades, researchers have shown that man-made pollution directly harms marine life—but there’s still far more work to do. Biologists have only studied the effects of harmful chemicals on a handful of ocean-dwelling animals, leaving the influences of contaminants on the rest of sea life largely unknown.

Now, scientists are trying to close that knowledge gap in whales and dolphins. A study out last week in Frontiers in Marine Science surveyed 83 animals stranded on shores across the southeastern US from 2012 to 2018 to investigate how toxic chemicals pervade these animals’ bodies, and in what quantities. The 83 animals represent 11 species, some of which scientists know little about as human sightings are incredibly rare.

Every time a marine mammal is found dead and stranded in their area, Annie Page-Karjian, a clinical veterinarian at Florida Atlantic University who specializes in marine animals and lead author of the paper, heads out to do a necropsy—the animal equivalent of an autopsy.

“We take hundreds of samples from their organs and we do a full pathological analysis,” she says. During necropsies, Page-Karjian looks for damage to the animal’s organs, identifies toxic chemicals in their tissues, and flags any diseases the animal may have been suffering from. Whales and dolphins are ideal subjects for marine toxicology research, she says, because of what they eat and how long they live.

“Cetaceans are apex predators,” Page-Karjian says. They’re at the tops of their food webs, which means that the chemicals and pollutants various ocean species eat or absorb will amass upwards as predators eat prey—a phenomenon known as bioaccumulation. “These whales and dolphins accumulate compounds within their body organs and blubber over the course of their long lives, and they provide a snapshot of what’s going on in the marine environment.”

And that snapshot, Page-Karjian’s team found, is alarming. One Gervais’ beaked whale, a species that humans rarely see, was found on a beach in Sebastian, Florida in 2017—it had the highest liver concentration of arsenic of any marine mammal to date. This is especially shocking, Page-Karjian says, when you consider that their normal habitat is so far removed from human populations. Two bottlenose dolphins—one found in North Carolina in 2012 and the other in Florida in 2018—both had liver mercury concentrations that were some of the highest of any animal researchers have studied.

Further, one white-beaked dolphin they studied had two different kinds of cancer in two organs: in its testicles and kidneys. Cancer in any marine mammal is rare, so finding two different kinds in one animal was an unpleasant surprise, says Page-Karjian. They have a suspected culprit, too. “This animal had the highest BPA concentration, [a known] carcinogen, of any of the animals that we looked at.” The BPA level was also higher than any other studies done in the past have published as well, though that data is very limited.

While the BPA concentration was indeed high, Page-Karjian can’t say with certainty that the chemical caused the animal’s cancer, as the study was only observational. “But what I can say is that they’re associated, and we need to do more research to learn more about that relationship.”

Page-Karjian says that these results are concerning, not just for whale and dolphin populations, but for humans as well. “Transfer of contaminants and bio-accumulation [are not] isolated to animals,” she explains, “it also happens in humans.”

The fish that whales and dolphins consume are not so different from the fish people eat. According to the United Nations’ most recent data, fish makes up about 20 percent of 3.3 billion people’s per capita protein consumption. Fishers caught more than 96 million tons of fish in 2018 alone. It’s not hard to see how marine mammal health could provide warnings for human health.

“When we study marine mammals, it also allows us to reflect on how we’re affecting ourselves,” Page-Karjian says—”We rely on the marine environment [a lot more than] people are even aware of.”

The current work has its limitations. The sample size was small and the researchers limited their specimens to beached, stranded animals.

In studies like this, “it’s not unusual to have a lower sample size,” says Tilen Genov, a marine biologist and cetacean specialist at the University of St. Andrews who was not involved in the research. Cetaceans are elusive creatures making them hard to find and harder to sample. The nature of their animal subjects means that sometimes sampling stranded animals is your best or even your only option, he says, even though strandings are not exactly consistent occurrences either. Not to mention that studying a dead, or recently dead animal won’t always produce data that reflects living populations.

Regardless, the information gained from this study has value. Some of these species are so rare, that we don’t even know what their baseline health or behaviors are, Genov says, so we have to accumulate these smaller sets of data over time to “build a better understanding of these animals and their ecological burdens.” How can we know whether they’re endangered, whether they’re being harmed by human pollution, or if they’re in need of protection, he asks, when we don’t even know all the basic facts of their species?

The work can be costly to boot, especially when you consider the encyclopedia of thousands of chemicals and elements that scientists could test for.

“You don’t know if you don’t look, and you’re not going to find something that you’re not looking for,” Page-Karjian says. Which is why Page-Karjian hopes that larger, better funded studies will be feasible on an international scale in the future—that’s what it would actually take to see the true scope and scale of this problem, she says.

“We tested for quite a few contaminants,” says Page-Karjian, “but that’s just like a tip of the iceberg of what they’re probably being exposed to in the ocean.” New industrial chemicals are produced and released into the ocean every year—chemicals whose toxic effects on animals and humans alike are completely unknown. The more evidence and understanding we can gather about these contaminants, the stronger the case we can build for conservation decisions, she says—it’s a process.