Nothing like a giant, fatty noggin to really hit the spot. 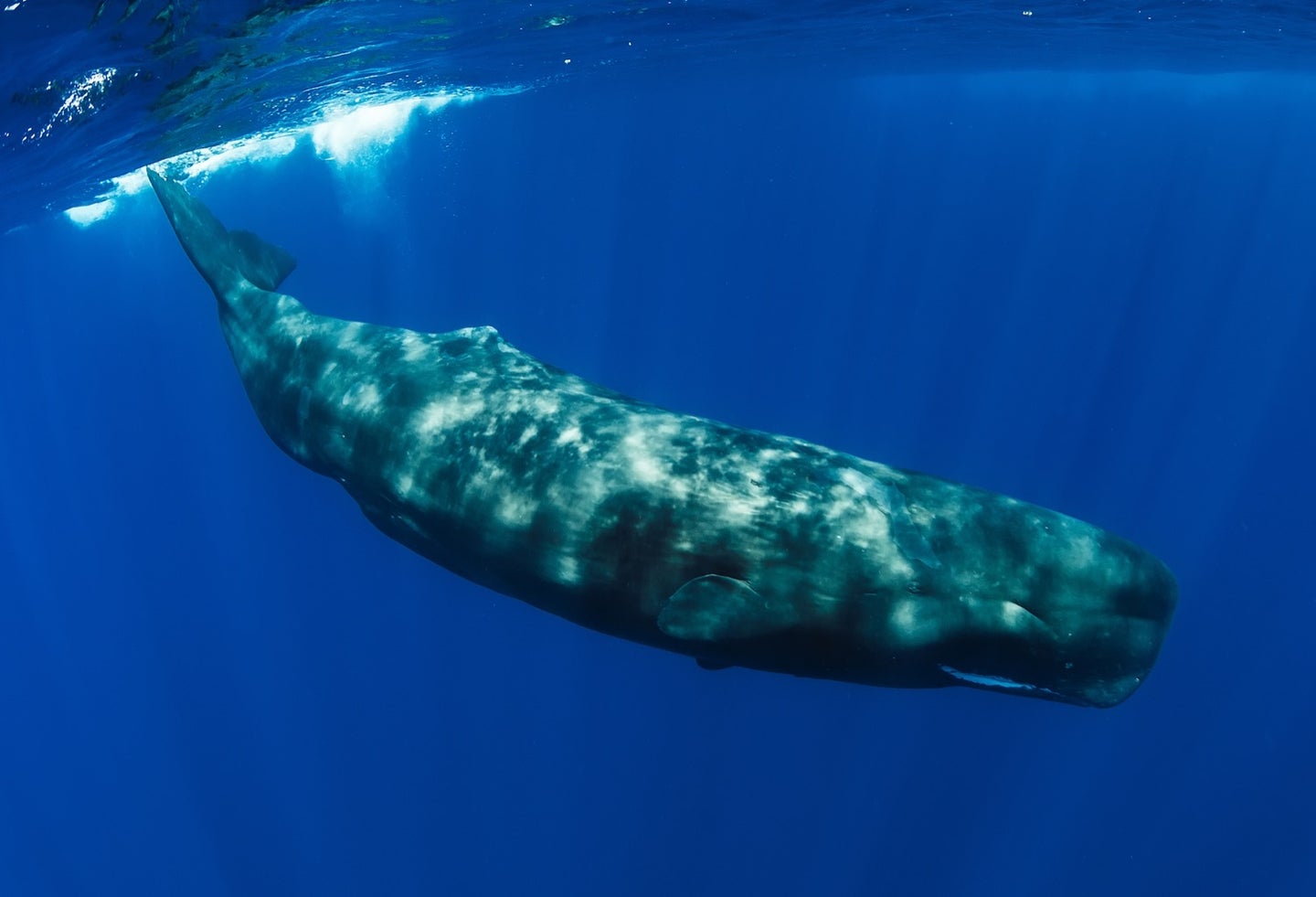 Ancient megalodon sharks may have snacked on sperm whale snouts, according to new analysis of the marine mammals’ fossilized skulls. An international team of researchers described signs of this “focalized foraging”—aka deliberate munching—in 7-million-year-old whale bones in Proceedings of the Royal Society B: Biological Sciences.

Both modern and fossilized sperm whales sport distinctive “supercranial basins” (read: giant noggins) that take up around a third of its body length, which can reach around 60 feet. These massive heads house their incredibly complex sound-production organs, which enable them to make louder noises than any other animal on the planet. But most of the supercranial basin is filled with an extremely fatty substance called spermaceti.

In the new study, which analyzed various sperm whale specimens held at the Natural History Museum in Lima, paleontologists found bite mark clusters that corresponded with the fattiest nasal regions.

“Many sharks were using these sperm whales as a fat repository,” lead study author Aldo Benites-Palomino, a doctoral candidate at the Paleontological Museum of the University of Zurich in Switzerland, told Live Science. “In a single specimen, I think that we have at least five or six species of sharks all biting the same region—which is insane.”

Unlike baleen whales that feed on tiny organisms, sperm whales are toothy predators that munch on fish and other marine critters. But Benites-Palomino and colleagues posit that their fatty schnozzes would have provided a much more appealing food source than the more docile, but slim marine mammals that swam in the oceans at the time. Plus, it’s likely that sperm whale noses only got nibbled on once the behemoths died of other causes.

“Our findings indicate that all of these were post-mortem events,” Benites-Palomino told Newsweek. “The carcasses were floating for days until all the fat was ingested by sharks, not being able to float any more.”

The research team found an assortment of bite marks that match multiple species of hungry sharks, but it’s no surprise that megalodon is the nose-biter making the most headlines. Otodus megalodon, which went extinct some 3 million years ago, is one of the only other carnivores in history to have rivaled sperm whales in size. Scientists are still figuring out how the ancient beasts lived and died, and Hollywood remains obsessed with the notion that they might still lurk in the deep.

In June, an unrelated study published in Science Advances suggested that megalodon might have been at the very top of the food chain—hunting other large predators and perhaps even engaging in cannibalism. But their status as apex predator is still up for debate, as other researchers have concluded that megalodon was likely on the same level of the food chain as ancient great white sharks. In fact, competition between them may have helped drive meg to extinction.

While this latest study gives us just a small taste of the intriguing megalodon’s diet, it does serve as a reminder that even the most aggressive predators are generally not above grabbing some fast food in the form of a whale carcass.

“More than actually answering questions, I think this is making me have more inquiries around all of these discoveries,” Benites-Palomino told Live Science.

With creatures as mysterious and fascinating as giant-headed sperm whales and long-lost mega sharks on the menu, it’s no surprise that researchers are hungry to learn more.