Whale ‘roadkill’ is on the rise off California. A new detection system could help.

If an AI-powered project can get giant cargo ships to slow down, fewer whales may perish. 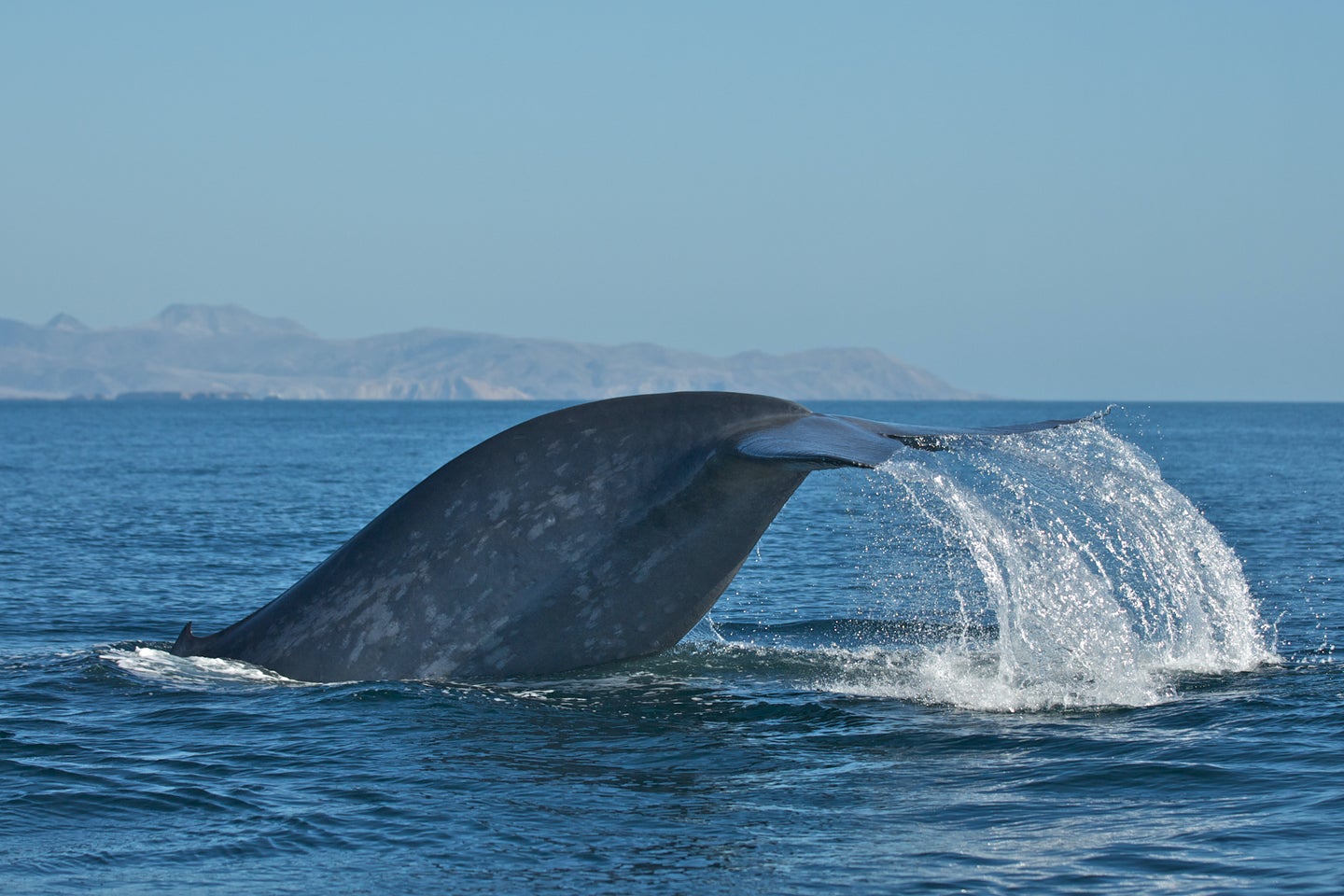 Last June, five biologists living and working at the Farallon Islands National Wildlife Refuge off the coast of Northern California gazed across the ocean from a lighthouse and noticed spouts coming from blue whales in the distance. For an hour, they counted them, arriving at an astonishing number: 47. It was the largest concentration of these massive marine mammals documented in California waters in 20 years.

“They were just everywhere,” recalls Mike Johns, one of those biologists and a scientist with Point Blue Conservation Science. “We could see them from the island all the way to the horizon.”

That so many whales of various species now traverse the California coast is a remarkable comeback tale. After the industrial slaughter of whales ended in the mid-1900s, scientists estimated that nearly 99 percent of the planet’s blue whales had been completely wiped out. Humpbacks and fin whales also suffered devastating losses. Today, blue whales and other endangered species, like fin and humpbacks, are recovering, but slowly.

But while industrial whaling stopped in the late 1960s (some countries like Japan and Norway do continue commercial whaling on a small scale), these mammals are still frequently killed in collisions with large ships. Most container ships today delivering goods across the ocean are so large that even a collision with a 50-ton whale can go undetected. Ship strikes remain a leading cause of death to whales around the globe, and in some places, like California, they are on the rise.

According to the National Oceanic and Atmospheric Administration, 2018 and 2019 were the worst years on record for fatal whale-ship collisions off the coast of California, with 21 whales killed. Further, scientists estimate that over 80 endangered whales are likely killed by ship strikes off the entire west coast of the United States each year. Researchers say that the true death toll is likely far larger since most whales struck by ships sink to the bottom of the ocean rather than wash ashore.

The number of ship strikes and deaths in California has alarmed wildlife officials who say that if such high numbers persist, the long-term survival of these endangered animals is in jeopardy. But there’s hope: A new project meant to reduce ship strikes and to potentially hold shipping companies accountable for driving too fast was announced on September 17 in the hope that more whales can be saved.

Called Whale Safe, the effort uses a three-pronged approach to identify when whales and ships are present in the Santa Barbara Channel, a key throughway for ships that come and go from the Ports of Long Beach and Los Angeles, the nation’s two busiest ports by container volume.

Launched on September 16, Whale Safe is the result of a collaboration between the Benioff Ocean Initiative and several U.S. universities and oceanographic organizations, including the Woods Hole Oceanographic Institute, Scripps Institution of Oceanography, the University of California Santa Barbara, and the University of Washington, among others.

“The purpose of Whale Safe is not just to detect whales, but to try to engineer change and fix this problem of ships colliding with whales,” says Douglas McCauley, a marine ecologist at the University of California at Santa Barbara, and director of the Benioff Ocean Initiative, which runs the Whale Safe program.

Here’s how it works: An acoustic receiver attached to a single buoy moored in the Santa Barbara Channel constantly listens for whale vocalizations. Onboard a computer on the buoy out at sea, an automated detection algorithm harnessing the power of artificial intelligence identifies nearby vocalizing blue, humpback, and fin whales in near real-time. Results are sent from the buoy via satellite to researchers who confirm the sounds, and match them to visual sightings from scientists and whale-watching boats in the area. This information is overlaid on a statistical model developed by data scientists showing the likelihood of whales in the area based on real-time environmental conditions.

The whale identification algorithm was developed by data scientists at Texas A&M University at Galveston and the Woods Hole Oceanographic Institution using more than 4,500 recordings of blue and fin whale sounds taken from underwater microphones at over a dozen locations over 14 years. The resulting whale call library is matched to sounds coming from the channel, allowing the system to identify new whale calls, signaling the presence of whales in the channel.

“Whale Safe is the first of its kind in that it combines acoustic model and habitat data to give us a holistic picture of what’s going on with whale presence in the Santa Barbara Channel,” says Morgan Visalli, a Benioff Ocean Initiative (BOI) scientist and Whale Safe project lead.

The system also monitors the speed of ships through the channel, where a voluntary 10-knot (11.5 mph) speed limit for six months of the year was implemented in 2007 following the death of five blue whales found in the Santa Barbara Channel, all of which were determined to be caused by ship strikes. Studies show that lower ship speeds can reduce the number of fatal collisions by up to 80% to 90%, but according to researchers, ships in the channel frequently exceed the voluntary limit, sometimes doubling it. In 2019 more than half of the ship transits in the channel exceeded 10 knots, according to Whale Safe.

“We do hope and expect cooperation levels will come up,” says Sean Hastings, the resource protection coordinator for the Channel Islands National Marine Sanctuary. “It is in everyone’s interest to make these voluntary programs work.”

Getting ships to slow down is one of the project’s top goals. Since the speed limits are voluntary and so many shipping companies ignore them, the Whale Safe program aggregates data from the Automatic Identification System (AIS), a GPS tracking system that large ships use to navigate and avoid collisions. Ships are required to use the AIS by the International Maritime Organization, constantly broadcasting their identity, location, and speed. Ships passing through the 120-mile long Santa Barbara channel will have their speeds recorded and posted on the Whale Safe website.

The data identifying whether whales are present will also be provided to the shipping companies themselves. As a ship approaches the Santa Barbara channel, or if it plans to do so in the near future, the crew can access the Whale Safe website or opt to receive daily text alerts informing them if there are whales present and adjust the ship’s speed accordingly. Whether they do so or not remains an open question because the system just launched, but McCauley says he has been in conversation with several large shipping companies, and he’s optimistic that some will take advantage of the near real-time data provided by the system to inform them when it’s appropriate to slow down.

“It’s effectively a flashing light on the sign in front of schools saying ‘Slow down, kids present,’” says McCauley.

But, there are reasons why these giant vessels may not want to slow down. In general, ships are scheduled to be in port as a specific time, and missing a port time can be very expensive. Longshoremen must be paid to wait. Tugboats are reserved. Like at airports, berths are used by multiple ships, and a late ship can cause larger delays in the system. Some shipping experts say it’s just not worth the cost to miss a port time.

“Everything is money,” says Jeff Cowan, the immediate past president of the Council of American Master Mariners. “It’s a long chain and there’s a lot of money involved. Even a small change can reverberate.”

Other logistics can get in the way. “There are ships that just don’t have the ability to comply and still maintain their required schedule,” said John Berge, a vice president with the Pacific Merchant Shipping Association, a maritime industry organization.

Whale Safe also uses the AIS data to assemble shipping company “report cards,” compiling compliance with the 10-knot voluntary speed limit over time. The report cards, which issue grades from A to F, are posted publicly on the Whale Safe website in the hope that journalists, researchers, and the general public will identify—and perhaps publicly confront— poorly compliant companies to get them to slow down.

“The last thing anybody wants is a whale draped over the bow. That’s really bad for PR,” says Kipling Louttit, the executive director of the Marine Exchange of Southern California, a shipping industry group.

Currently, for the year 2020, of the 149 report cards that rate cooperation with NOAA’s voluntary speed restrictions in the Santa Barbara Channel, 37 companies have received the grade of F, meaning they comply with the voluntary speed limit less than 20 percent of the time. Most of the companies listed are headquartered in Asia, but several are American. Polar Tankers, Inc., a U.S. tanker operator along the U.S. West Coast, received an A with a cooperation rating of 95.4 percent, while Honolulu-based Matson received an F on the site. According to the data used by Whale Safe, 48 percent of Matson’s ships traveled through the channel at speeds exceeding 15 knots per hour with a cooperation rate of 16.5 percent.

In response to an email from Popular Science seeking comment on the low score, a representative for Matson stressed the company’s “core mission” of serving “just-in-time” markets in the Pacific, noting further that “our entire operational structure is built around and dependent upon timeliness and schedule reliability.”

Whale Safe’s McCauley also says there are plans to identify the customers of the most egregious violators, including large American retail corporations like Wal-Mart, who depend on international shipping to get their goods to market. However, in the last two decades, many large corporations have hired sustainability officers whose job it is to manage a company’s compliance with environmental laws and human rights all the way through the supply chain. Few corporations want to be seen dealing with irresponsible players when it comes to pressing global issues like climate change or slave labor. McCauley wants to add whales to that list.

“Not everybody knows that a leading cause of death for whales is that they’re being run over by ships and that roadkill at sea is a thing,” he says. “If we want the retail companies to take this seriously, we have to get this message out to the public, is your company whale safe or not?”

Some scientists are skeptical, however, that the Whale Safe program, as it stands now, will have much value or effect change. With just one acoustic receiver, it’s impossible to determine the number of whales vocalizing or to pinpoint their location within the channel.

“We have found that there is not always a good concordance between acoustic detections and the presence of large feeding concentrations of whales,” says John Calambokidis, a whale researcher and founder of the Cascadia Research Collective, which studies whales on the West Coast. “There can be many whales present and few calls being produced, or conversely just one whale producing lots of calls. Second, the detector just tells you there is a whale in the Santa Barbara Channel region, and not whether it actually is in or near the shipping lane.”

Other conservation organizations are not waiting for industry cooperation. The Center for Biological Diversity (CBD), a conservation group behind the 2007 effort to implement the voluntary 10-knot speed limit in the channel, says it is preparing a new lawsuit under the Endangered Species Act seeking mandatory speed limits in the channel.

“The science in the last few years is showing that the problem is bigger than we thought it was even a decade ago, particularly for blue whales,” says Brian Segee, a senior attorney at the CBD. “At the end of the day, voluntary limits have resulted in a minuscule number of ships slowing down. We feel very strongly that what is needed is a mandatory speed limit, and we consider that a very small ask.”