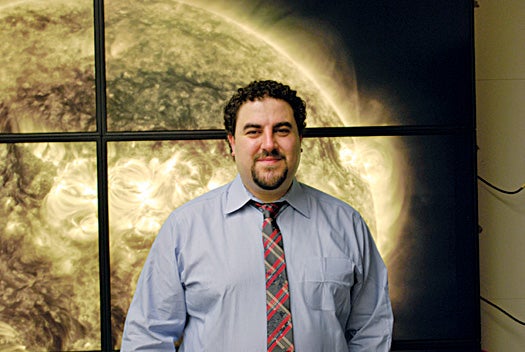 In July 2010, a colleague rushed into Justin Kasper’s office at the Harvard-Smithsonian Center for Astrophysics, in Cambridge, Massachusetts. He showed Kasper a telescope video of something they had never seen before: a comet crashing into the sun. The sight was amazing. But what grabbed Kasper’s attention was the moment before impact, when a surprising cloud puff indicated that the comet had hit unobserved material.

To answer, among other questions, what caused the cloud puff, Kasper is designing an instrument that will get closer to the sun than ever before. The Solar Probe Cup will scoop up bits of the sun’s corona and solar wind to continuously measure its speed, temperature and density. That information will help astrophysicists investigate why the corona’s plasma gets so hot—it can reach a million degrees—and how the plasma turns into a millionmile-per-hour solar wind, and what that mysterious puff might be. “Who knows what we can’t make out because we’re just too far away?” Kasper says.

The Solar Probe Cup will ride on NASA’s first solar mission, called Solar Probe Plus, in 2018. When it reaches the sun, it will have to withstand temperatures of up to 2,550°F. Kasper and his team have begun upgrading a conventional ion detector by shrinking the plasma-collection cup (so that it will absorb less heat) and etching sturdier grids out of melt-resistant tungsten and sapphire.

Once the Cup takes off, the data-crunching begins. Kasper has several theories about the plasma movements his detector could uncover, but sometimes even the best theories can’t anticipate what the actual conditions in the plasma will be. “We’re trying to build instruments as capable as we can,” Kasper says, “because very rarely do we find what we were expecting. That’s part of the fun.”