He reveals the rules of groups 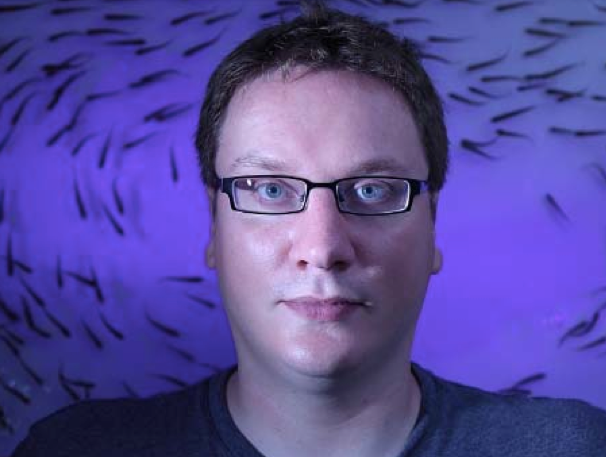 The shuffle of life—the wheeling of birds, the silver flash of escaping fish—looks mystically organized. Iain Couzin, who models collective behavior in nature, identifies those patterns mathematically. And he’s finding that certain patterns extend across otherwise unrelated units of life, whether bugs or cancer cells.

Couzin, an associate professor in the department of ecology and evolutionary biology at Princeton University, films animal behavior and analyzes the footage in a computer to pin down the collective decision-making process of animals, and how individuals affect it. Since the time of Aristotle, what we call emergence theory has shown that simple behaviors can produce complex results. But Couzin is spotting the specific mechanisms whereby locusts swarm or schools of fish evade predators.

As a child in Scotland, Couzin was fascinated by animals, but with three brothers allergic to all things furry, most creatures were forbidden. “So I went with bugs,” he says. “They weren’t allergic to those. I kept them everywhere.”

One night he saw a TV documentary about a biologist who followed ants across Central America. After college, Couzin sought the star out at the University of Bath in England in pursuit of a Ph.D. Under that biologist—Nigel Franks, now at the University of Bristol—ants became Couzin’s first animal-system subject. But, he says, “I could only observe one ant at a time.” A colony of ants accomplishes multiple tasks simultaneously, he explains, “and that’s impossible for a human to observe.” As a biologist, he didn’t necessarily have the tools he needed to see collective behavior, so he taught himself programming. “Using computer vision,” he says, “you can see the data you need.”

He still observes his subjects directly (in England, his lab contained a sort of running track for locusts, and at Princeton he maintains an easy-to-photograph tank of fish where he records their movements), but he gets his insights using powerful PCs and custom software. And by modeling the behaviors of a wide variety of organisms and then comparing those models in the abstract, Couzin has begun to identify certain fundamental principles across nature.

Locusts, for example, seem to align according to the same principles that magnetic particles do. In fact, he has learned that accurate predictions about group behavior may not necessitate much information about individuals. Locusts or cancer cells: It doesn’t matter what’s involved. Gather enough of them, and, Couzin’s models show, they tend to behave similarly together. As he puts it, “Biological transition from disorder to order seems to require only a few fundamental principles.”

Couzin’s findings may have many practical uses. Specialists from such fields as anthropology, medicine and zoology now regularly consult him for perspectives on their own research. A researcher at the Massachusetts Institute of Technology and the Harvard Cancer Center brought him in to look at cancer metastasis, and Couzin is collaborating with a University College London researcher on cell migration.

Most recently, Proceedings of the Natural Academy of Sciences accepted his paper on the effect of habitat disruption on animal migration. It turns out that Couzin’s computer model can identify not only group organization, but also how it falls apart. From wildebeest to flocks of birds, it model reveals that there’s a point at which a fractured habitat disrupts migration. Here’s the bad news: “Repairing the habitat requires restoring it to a better condition than it was in when the migration was abandoned,” he says. Perhaps Couzin’s work will help create a corps of pattern detectors who can finally pick out what nature was showing us all along.