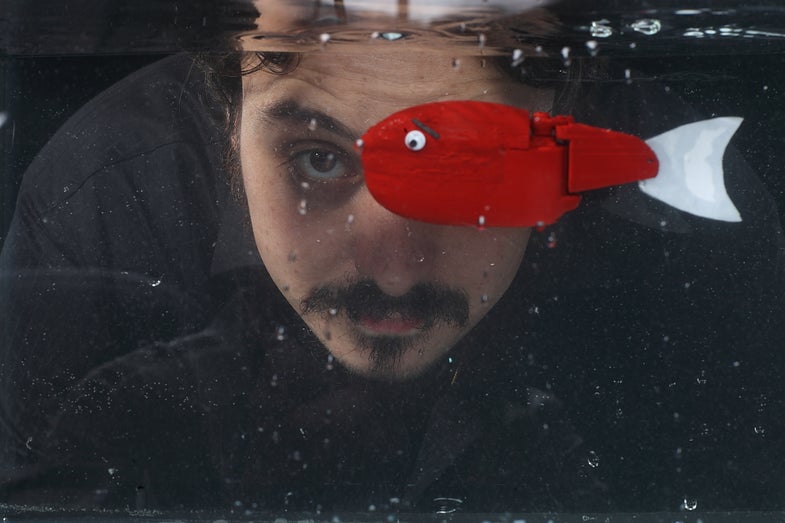 What does an engineer do when he needs insight? “I don’t think,” says Maurizio Porfiri. “I watch an insane amount of movies.” He also tends listens to the Cure, devours novels, and tends to his tomatoes. That’s not to say Porfiri is a slacker. He works across several fields to build underwater devices and puts in 12-hour days at the lab, but his best thoughts come to him while he’s relaxing.

Consider his idea for biologically inspired robots that might influence animal behavior in nature. “If we borrow design from nature to build our robots, why not use the robots to assist nature?” says Porfiri, who is an assistant professor at the Polytechnic Institute of New York University. “Can we close the circle?” Maybe a robot fish could guide real fish away from power turbines or oil spills. Drawing on research that suggests that fish school by following the wake of other fish, Porfiri designed his robot to generate fishlike turbulence. An electric current from a battery makes a polymer in the tail expand and contract like muscles, producing an eerily natural-looking and silent movement. This spring, he put a biomimetic robot together with actual lab fish, which followed it about 25 percent of the time.

“As a kid I was always asking ‘why this? why that?’ until the family would get fed up,” he says. That curiosity led him to a doctorate in theoretical and applied mechanics in his native Italy and, because he wanted to work over here, an American one in engineering mechanics. Then he fell into a postdoc working on algorithms to control autonomous submarines, and underwater applications became his life’s work. The waters that cover about 70 percent of the Earth’s surface are basically unexplored. But underwater vehicle systems lag behind their surface counterparts in power (solar can’t be used in the deep) and communications systems (Wi-Fi doesn’t exactly crank through 300 feet of liquid).

Porfiri’s lab could close that gap. He’s creating simple algorithms that could help underwater robots form into schools, he’s been investigating polymers that harvest kinetic energy from water, and he’s designing a new robot—a mammal-safe one, without external blades. If any of those things trip him up, he says, it will be time for a sixth viewing of Fargo.