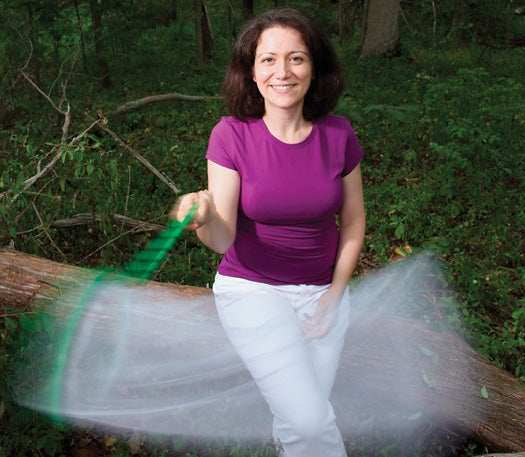 When Alessandra Luchini was a girl growing up in Italy, she visited the Museo Galileo in Florence, where she saw the telescope that Galileo Galilei had invented four centuries before, in 1610. She was struck by its simplicity. with a just a couple of pieces of curved glass, anyone could see whole new worlds.

In 2005, Luchini, now an engineer at George Mason University, came to the U.S. on a grant from the Italian National Health Service to study ways to detect molecular signs of cancer. Some diseases, early on, release faint hints of their presence into our bodily fluids. These “biomarkers” are ephemeral—our enzymes chew them up within minutes, so they’re undetectable in most lab tests. If doctors had a way to catch and stabilize those biomarkers, they could detect diseases more quickly and begin treatment at a stage when the chances of recovery were much higher.

Luchini’s solution was to build a nanoparticle trap. The concept, like Galileo’s telescope, is simple: “It’s like a net for catching very small fishes,” Luchini says. The spherical nanoparticle, which took two years to perfect, uses hydrogel as its backbone. Inside, a crisscrossing polymer net holds bait, such as acid or dye, which chemically attracts various biomarkers. when lab technicians mix the nanoparticle in with a fresh blood sample, it traps the biomarkers and protects them from enzymes. The sample can then be tested at leisure. So far, Luchini has used nanoparticle traps to produce an early diagnosis of infectious diseases such as Lyme disease and tuberculosis. (The traps can also reveal the presence of human growth hormone in urine, and thus offer a novel way to reveal illegal doping by athletes.) She and her team are also working on nanotraps to find the skin-cancer biomarkers that exist in a person’s sweat.

Luchini’s next step is to modify the nanoparticles so they can trap biomarkers in a body, giving doctors a realtime view of what’s going on inside their patients.