Cy Young-winning pitcher Bartolo Colon is back in a big way this season, having claimed a spot in the New... 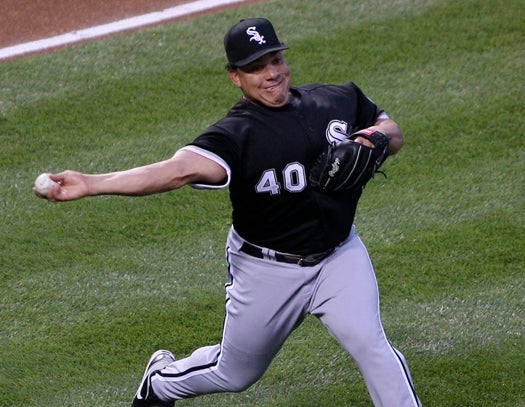 Cy Young-winning pitcher Bartolo Colon is back in a big way this season, having claimed a spot in the New York Yankees starting rotation after not throwing a pitch during the 2010 season following elbow surgery and the usual shoulder problems that accompany a career as a major league fastballer. But controversy is brewing over his bounce-back season, as it has come to light that his shoulder and elbow were last year injected with Colon’s own stem cells.

Stem cell treatments like this are of dubious clinical efficacy but are not banned by Major League Baseball. However, they are part of a growing grey area in professional sports wherein athletes receive questionable treatments that don’t violate the rules outright but may or may not offer them a competitive advantage.

In Colon’s case, the treatment was carried out in the Dominican Republic–not because the treatment is illegal in the States (it’s not) but because Colon lives there–by Dominican doctors and a Florida surgeon named Joseph Purita, whose regenerative medicine clinic has treated several other professional athletes. And though his office does offer human growth hormone (or HGH) treatment, he says he didn’t provide it to Colon or any of the other athletes (HGH treatments would definitely run afoul of Major League rules).

Purita’s procedure involved removing stem cells from Colon’s fat and bone marrow and injecting them into his elbow and shoulder to repair ligament and rotator cuff damage. It’s a procedure that hasn’t been put through rigorous clinical reviews, and other physicians say there’s no conclusive evidence that it works. The MLB, fighting a constant uphill battle to stay current regulating new performance enhancing drugs and supplements, doesn’t even have an official opinion–much less a rule–on such treatments derived from one’s own stem cells. They told the NYT they are looking into Colon’s case.

For his part Colon is 2-1 and throwing like he was years ago, topping 93 miles per hour with regularity. His ERA is a respectable 3.81. And if stats told the whole story, it would be easy enough to deduce that these stem cell therapies have given a 37-year-old pitcher a younger man’s arm.

Whether or not that’s so is up for debate, and surely there will be one. Can someone’s own cells be considered a performance enhancer? Can leagues and athletic bodies effectively test for such therapies? Was it the procedure, or Colon’s season off from the majors, that really repaired his arm; that is, do such therapies even make a difference?

If you’re into baseball, stem cell therapies, or medical controversies click through to the NYT piece below, it’s a good read on an increasingly weighty topic in sports and medicine alike.