But elective amputation has its opponents 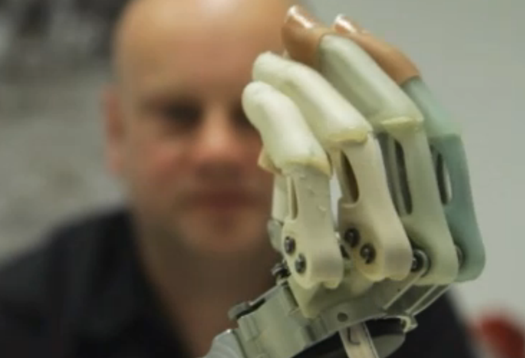 A Serb living in Austria has elected to have his hand amputated so that he can be fitted with a working bionic limb. The 26-year-old Milo’s biological hand was intact but useless, as a nerve injury stemming from a motorcycle accident ten years ago robbed him of feeling and movement in that extremity. Now, an Austrian doctor–not without controversy–has amputated Milo’s hand and is replacing it with a robotic version that responds to nerve signals in his forearm.

Milo lost his hand function when his motorcycle skidded off the road into a lamppost in 2001, and while his injured arm and leg healed, an injury to his shoulder called a brachial plexus left his right arm without feeling. By transplanting some muscle and nerve tissue into his arm from his leg, Professor Oskar Aszmann was able to restore feeling down through the forearm.

Milo’s hand, however, never recovered. But with the nerve tissue in his forearm restored, electric signals from his brain to his forearm were boosted, allowing for another less conventional option: discard the useless hand and replace it with a robotic one.

After trying out the bionic hand via a rig that fitted a working bionic hand parallel to his real one, Milo volunteered for the surgery. His new hand will be able to grasp and pinch in response to signals picked up by two sensors placed over the skin near nerves in the forearm, using nerve stimuli that would’ve caused similar movements in his biological hand.

Here’s the thing: Milo isn’t even the first person to volunteer to have a hand amputated by Prof. Aszmann. Last year a 24-year-old patient living with a similarly useless hand (electrocution the culprit this time) had a similar bionic hand installed. And, to hear the BBC tell it, he’s happy with the decision and with his augmented arm.

Some of Prof. Aszmann’s colleagues apparently aren’t so keen on the idea of voluntary amputation of biological tissue, arguing that more attempts should be made to repair the hand that’s already there. Aszmann sees it differently, saying years of pointless surgeries would still leave these patients with useless biological limbs.

The crux of the matter is this: we are just beginning to enter an era of prosthetic and neurological medicine wherein the bionic prosthetics are good enough that patients can opt (and have opted) for robotic solutions over conventional physiological ones. That’s a brave new world in many respects, as prostheses and bionic solutions historically have been solutions of last resort (and not great ones at that).

Will patients begin electing for amputation and robotic augmentation over experimental or risky surgeries and lengthy stints in rehab (and is there some kind of ethical protocol doctors should follow in performing such procedures)? It’s a thorny question, and one medical science on the whole is going to have to grapple with sooner rather than later.