The Incredible Shrinking Shot: Needles Get a Pain-Free Makeover

The design of the hypodermic needle has changed little since 1853, when French surgeon Charles Gabriel Pravaz first attached a... 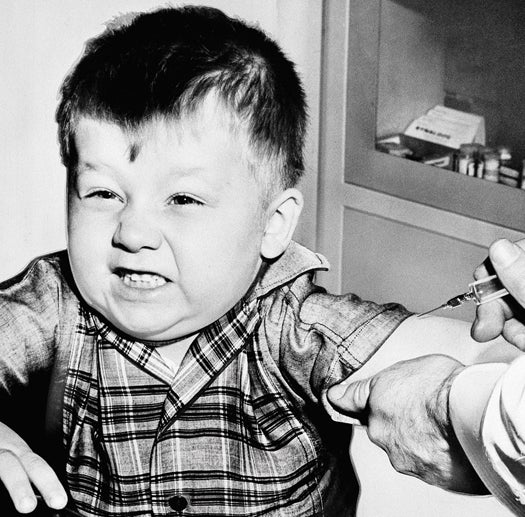 The design of the hypodermic needle has changed little since 1853, when French surgeon Charles Gabriel Pravaz first attached a hollow, skinpiercing cylinder to a syringe. today, medical-device designers are using micro-scale materials to make the needles shorter and thinner, which makes for less painful shots. 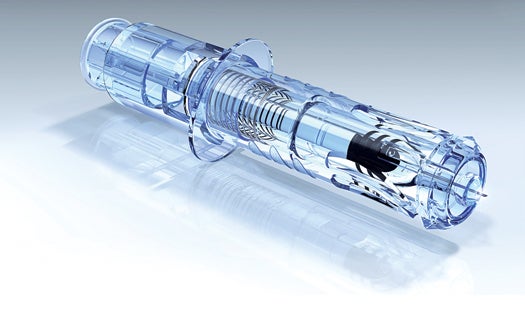 A shorter, slimmer needle delivers drugs more comfortably than a standard one.

Shots cause pain in two ways: a momentary pinch from piercing the skin and a muscular ache that can last for days. In May, the FDA approved a device that releases flu vaccine directly into the skin, avoiding the muscles (and the ache) altogether. The Fluzone Intradermal microinjector’s needle is about a tenth as long as the needle on a regular syringe and the width of a human hair. And because there are more immune cells in skin than in muscle, doctors could use less vaccine per shot, which could decrease vaccine shortages. The device’s manufacturer, medical company Sanofi Pasteur, says it will start shipping it in the U.S. this fall, just in time for flu season.

Mosquitoes use a combination of vibrating mouthparts, some smooth and some serrated, to discreetly extract blood. Engineers at Kansai University in Japan created a multipart needle that works like a mosquito’s (possibly the only thing we have to admire about the murderous little buggers): three individually motorized 0.04-inch-long needles—a smooth one for drug delivery flanked by two jagged ones—vibrate while taking turns advancing into the skin. The mechanism requires less than a third of the pressure of a standard needle to penetrate silicone skin test samples. The engineers hypothesize that less pressure causes less skin damage, which could also mean less pain. 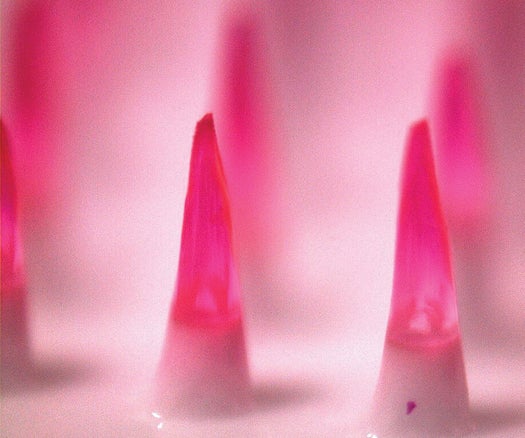 Dissolvable microneedles, each about two hundredths of an inch long, are almost painless.

Researchers at the Georgia Institute of Technology and Emory University have developed a dissolving microneedle patch that could painlessly deliver drugs straight into the skin, leaving behind no sharp parts that could accidentally stick someone and spread disease. About 100 dissolvable, drug-loaded polymer microneedles (each about two hundredths of an inch long) fit on a Band-Aid-like patch the size of a quarter. The patch is easy to apply and can be stored at room temperature, making it particularly useful in poor countries where refrigeration is scarce and doctors may not be available to supervise injections. In clinical studies, the patch delivers drugs with almost no pain. A commercial version could be available in five years.