A maned wolf that had been left for dead after being hit by a truck was released back into the... 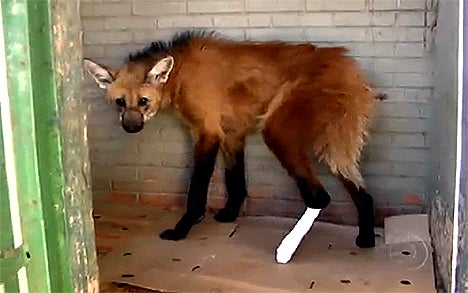 A maned wolf that had been left for dead after being hit by a truck was released back into the Brazilian wild this month, granted a speedy recovery through the use of stem cells. The female wolf is reportedly the first wild animal treated with stem-cell therapy, according to the Brazilian National Journal.

The wolf was in a pre-coma state when a passerby brought her to the Brazilian National Zoo in September, the National Journal said. She had broken bones and various other injuries.

Veterinarian Rafael Bonorino implanted stem cells near the site of the wolf’s broken bones, and the animal was back on its feet within hours, Brazilian media reported. After a few days, she no longer needed pain meds, and just eight days after her surgery, the wolf pried open her enclosure and escaped. Veterinarians found her about two miles away and brought her back for further treatment and monitoring.

Her broken leg had completely healed after three weeks, the National Journal said. After four months of rehabilitation, the wolf was released back to the wild. That’s half the time it would normally take to treat a wild animal with her level of injuries, veterinarians said.

“Making use of stem cells, we will have faster healing of the bone,” Bonorino said (translated with Google). “This animal is now less prone to re-fracture and the healing is more complete.”

Plenty of other animals have been treated with stem cells, but normally it’s to test stem cell therapy’s efficacy and safety for eventual use in humans. Human stem cell therapy is still brand-new — the first regulated clinical trial using stem cells for stroke treatment started in November, for instance. Experimental treatments have shown stem cells can grow teeth, restore sight to eyes damaged by burns and even cure HIV (by accident).

Now they’ve been shown to help wild creatures hurt by interactions with humans.