The first company to start human clinical trials using embryonic stem cells is quitting the project and laying off more... 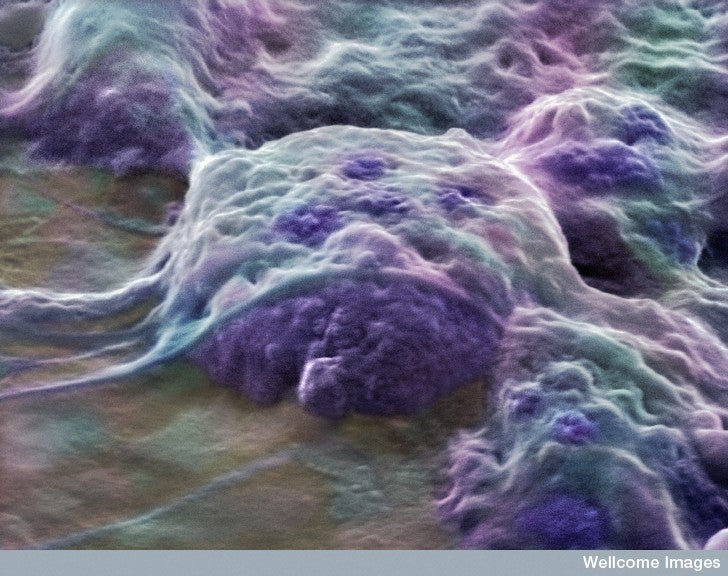 B0006251 Human embryonic stem cells Credit: Annie Cavanagh. Wellcome Images images@wellcome.ac.uk http://images.wellcome.ac.uk Undifferentiated human embryonic stem cells growing in culture with fibroblasts. The fibroblasts have been treated so they don't divide but are present to provide factors that maintain the stem cells in their undifferentiated state. The stem cells appear to be underneath a layer of fibroblasts. The stem cell line is derived from the inner cell mass of a human embryo. Scanning electron micrograph 2006 Published: - Copyrighted work available under Creative Commons by-nc-nd 2.0 UK, see http://images.wellcome.ac.uk/indexplus/page/Prices.html. Wellcome Images
SHARE

The first company to start human clinical trials using embryonic stem cells is quitting the project and laying off more than a third of its staff. Geron Corp. said it is discontinuing its FDA-approved stem cell test and turning its focus to cancer treatment instead.

The news is a blow to advocates of embryonic stem cells as a potential treatment for a wide range of ailments. The trial, which started last fall, was progressing nicely, according to Geron’s own statements as of October — four patients had received treatment so far with no negative side effects. But Geron could not continue the research “In the current environment of capital scarcity and uncertain economic conditions,” John A. Scarlett, Geron’s chief executive officer, said in a statement Monday afternoon.

The clinical trial aimed to demonstrate the safety of embryonic stem cells as a potential treatment for spinal cord injuries. Geron will continue to follow patients who have already enrolled in the trial and have received treatment, but will not accept any new patients. The company will also continue to update the FDA on the current participants’ progress.

The patients in question received injections of 2 million stem cells within 7 to 14 days of a debilitating spinal cord injury. They also received immune-suppressing drugs and multiple MRI scans to monitor their progress. The therapeutic dose, called GRNOPC1, contained oligodendrocyte progenitor cells that were derived from human embryonic stem cells. The treatment is controversial because obtaining those cells require the destruction of a human embryo.

Stem cell research advocates voiced frustration Monday and Tuesday, perhaps none as powerfully as Daniel Heumann, who sits on the board of the Christopher and Dana Reeve Foundation. The Washington Post quoted him as saying he was “disgusted” by the news: “It makes me sick. To get people’s hopes up and then do this for financial reasons is despicable. They’re treating us like lab rats,” he said.

Along with the spinal cord trial, Geron was also testing embryonic stem cell treatments for cardiac cells; a type of pancreas cells for diabetes; cartilage cells; and immune system cells called dendritic cells, the AP reported. These projects will all cease and the company will turn instead to its cancer therapy programs. The company is looking for buyers to take on some of its stem cell-related assets, according to a news release. Meanwhile, 66 full-time positions, representing 38 percent of the company’s workforce, are being eliminated.

Geron is not the only company in a clinical trial phase — a Scottish patient at Glasgow’s Southern General Hospital received a stem cell transplant following a stroke last year, and this summer, a different California company started a clinical trial using embryonic stem cells to treat blindness.